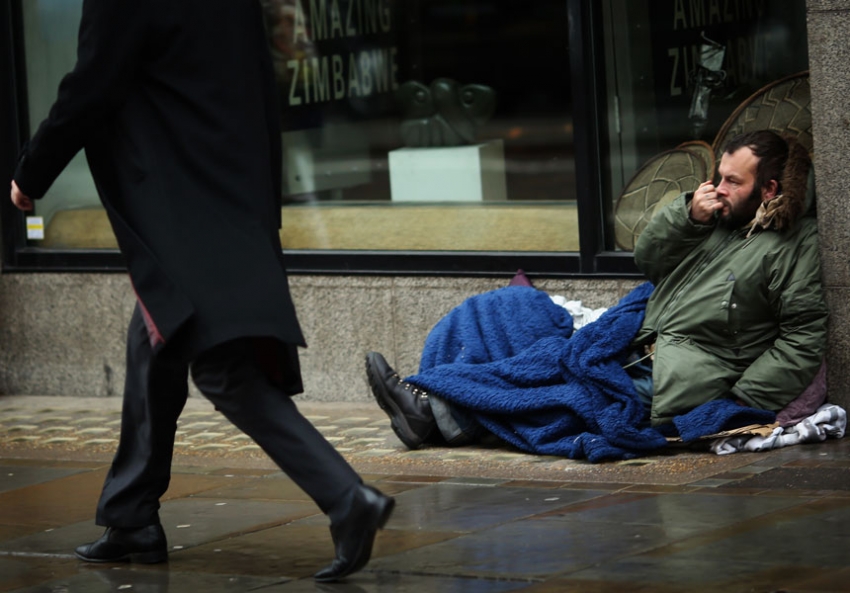 A pedestrian walks past a homeless man near Trafalgar Square on January 27.

Cuts for the Poor, Tax Havens for the Rich

The Panama Papers expose the hypocrisy of England’s oligarchs.

We are governed by people who have been cushioned from need all their lives.

In 1960, when we moved into the house I still inhabit, the real estate agent described this part of Chelsea as “run-down” but “coming up.” Indeed, my mother-in-law, who’d just stopped being a stalwart Communist, congratulated her son on living at last “among his own people.” She’d lived in our street briefly in the 1930s and remembered it as working class. Nowadays, the news that I live in Chelsea occasions whistles of surprise or disapproval or possibly envy. It’s where rich people live.

Yet until a month ago, there were five men sleeping on the ground under an overhanging concrete shelf by the local fire station, which is exposed to the elements and the unfriendly. I took them to be refugees, as they didn’t speak much English. Presumably those who sometimes left croissants and bananas and occasionally books thought the same. Now they’ve been evicted and their temporary sanctuary made impenetrable by the erection of a nasty green steel barrier. They are just some of the thousands and thousands of people who are told these days they’re not wanted, that they should return to homes that no longer exist, should expose themselves and their families if necessary to drowning and bombs, and to poverty and starvation.

A famous 19th-century institution, the Charity Organisation Society (which spread to the United States later in the century), saw its primary duty as distinguishing between the “deserving” and the “undeserving” poor. We appear to be returning to those times, as the state disowns responsibility for suffering or poverty and spends longer sifting the sheep from the goats than on confronting the causes and the extent of poverty in the world.

All that may seem miles from the so-called Panama Papers and the embarrassment they’ve caused our prime minister, David Cameron, when they revealed that his father ran a tax-avoiding investment fund in one of the “treasure islands” (otherwise known as tax havens) that now constitute what’s left of the great British Empire. Not surprisingly, Cameron turns out to have benefited from his father’s foresight, though it’s not clear that either father or son acted unlawfully. But Cameron refused four times to come clean about it all, and when he finally admitted to his party colleagues that it had been a “bad week” and he was sorry if he’d misled them and handled it all badly, his mea culpa ended with assurances that the Conservatives were still the “low tax” party, which is what matters most to them all.

But the goings-on on my street corner and in offshore tax havens both show how far our laws have been bent to suit the rich and screw the poor. It’s been some time since I’ve felt inclined to raise more than two cheers for our democracy. Removing helpless people sleeping in the street and stashing your millions in low- or no-tax havens are both legally sanctioned in this country, and neither the Labour government nor the Coalition nor this Tory government have had the slightest intention of changing laws that make such actions permissible.

We are governed by people who have been cushioned from need all their lives. Not only have they shown us to be almost the meanest of any European country in our offer to take in refugees, they have overseen a thorough dismantling of those social structures best able to mitigate disadvantage: accountable local authorities, trades unions, even libraries and language classes. More aggressively still, they have removed all curbs and restraints on the wildest excesses of inequality in living memory. Not only do thousands of people wake up to find themselves unemployed and in danger of losing their homes, they have to read and learn daily of the capacity of the rich to increase assets effortlessly, maximise fortunes and take for granted their own and their children’s right to choice and variety and success.

Cameron jeered at Jeremy Corbyn’s shabby clothes recently. But a few sharp questions about the antics of Cameron’s dead father, who made millions for himself and his clients by hiding it in Jersey, and we’re expected to feel sorry for him?