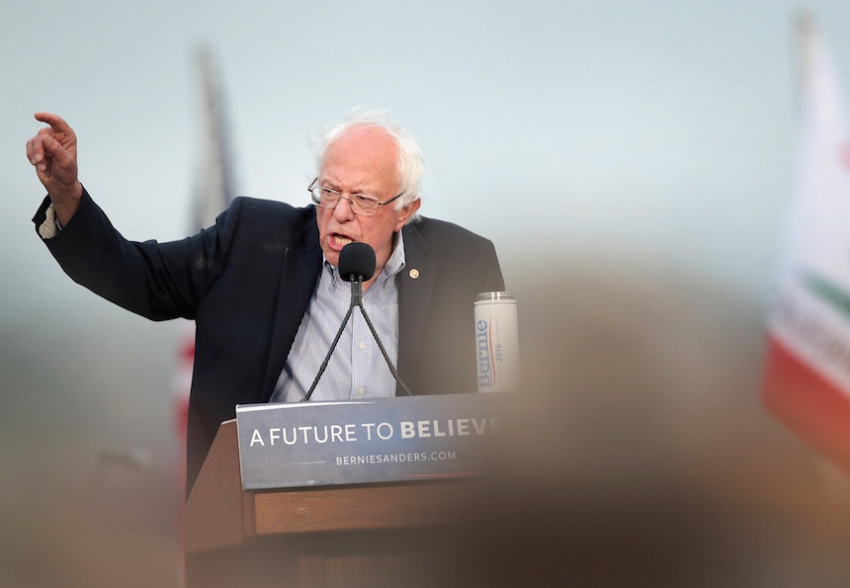 Bernie Sanders addresses a crowd of more than 10,000 in San Francisco on the eve of the California primary. (Photo by Scott Olson/Getty Images)

Bernie Has Every Right To Raise Hell at the Democratic Convention

As wise man once said, “Democracy is not always nice and quiet and gentle.”

“If they make the right choice and open the doors to working-class people and young people and create the kind of dynamism that the Democratic Party needs, it’s going to be messy.” -- Bernie Sanders

With increasing fear and dismay, the pearl-clutching pundits and flacks in the Democratic Party establishment have been doing their utmost to scold, bully and shame Bernie Sanders and his Teen Spirit revolutionaries into submission.

They would prefer that the Democratic National Convention be a stage-managed coronation, rather than an honest and disputatious contest over what the Democratic Party should stand for. Conventional Democratic wisdom goes as follows: Now is the time for all sentient Democrats to subordinate their differences and close ranks against the terrifying Trump.

Yes, Trump is dangerous and not to be underestimated. Precisely for this reason establishment Democrats should welcome Sanders’ supporters to Philadelphia. To its credit, the Democratic National Committee (DNC) has allowed the Senator from Vermont a say in the composition of the Platform Drafting Committee, six of whom were chosen by Hillary Clinton, four by DNC Chair Debbie Wasserman Schultz and five by Sanders.

“With five good members on the Platform Drafting Committee,” Sanders said, “we will be in a very strong position to fight.” He then listed four planks that he wants in the platform: the creation of an economy that works for all people, breaking up the five “too-big-to-fail” banks, a carbon tax to address climate change, and a single-payer healthcare system.

Sanders admits that a floor fight over the platform could get raucous. “If they make the right choice and open the doors to working-class people and young people and create the kind of dynamism that the Democratic Party needs, it’s going to be messy,” he said. “Democracy is not always nice and quiet and gentle.”

Unfortunately, relations between Sanders and the party elites again soured when Wasserman Schultz rejected Sanders’ petition to, among other things, replace Clinton partisan Barney Frank as the co-chair of the DNC’s Standing Rules Committee, the all-important body that decides how the convention will be conducted. For instance, will the names of the delegates and how they voted be tallied for the public record?

Recall the 2012 convention, when it took three voice votes before the addled convention floor chair, L.A. Mayor Antonio Villaraigosa, decided the loudest cohort were those who endorsed the AIPAC-supported vision of an undivided Jerusalem as the capital of Israel. A roll-call vote would have put the superdelegates, many of them elected office holders, on the record.

Understandably, Sanders objects to Frank as co-chair of the committee. Frank, a paid board member of Signature Bank, which serves high-end clients, has denounced Sanders as “outrageously McCarthyite” for talking about Goldman Sachs paying Clinton $675,000 in 2013 for three speeches.

Call them crazy, but the Bernie kids believe that a politician’s pronouncements and promises to influential industries should be subject to public scrutiny. The Rules Committee must be transparent, accountable and responsive to rank-and-file members’ concerns. The critically important “party unity” that establishment Dems keep braying about will only be jeopardized if the Rules Committee betrays itself to be an opaque politburo committed to protecting Clinton and the party’s old-guard nomenklatura.