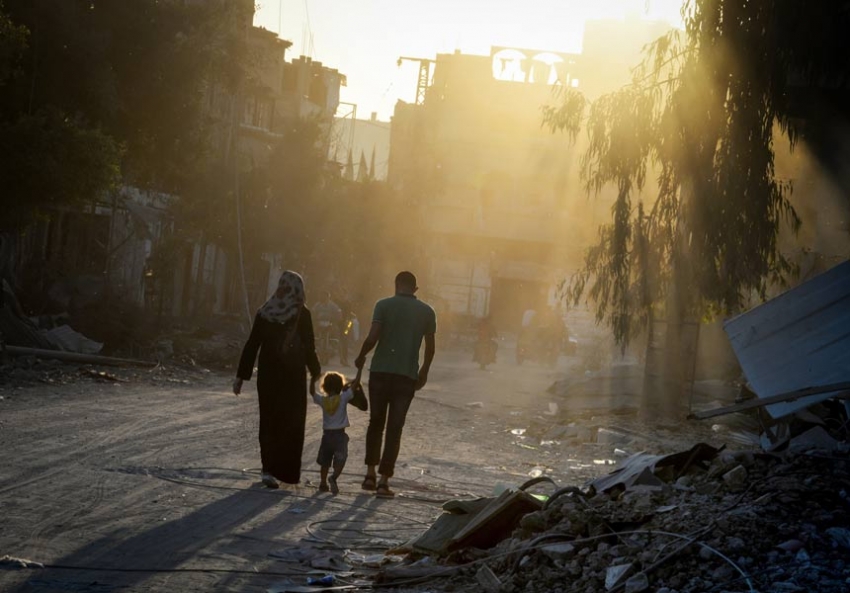 Sammy Al-Sheikh and his wife, Maha, walk with their daughter Assil past destroyed houses in the neighborhood of Shejaiya in Gaza City on August 7, 2014. (Roberto Schmidt/AFP/Getty Images)

In Gaza, the Drones Never Sleep

“He might decide to terminate the life of someone walking along the pavement, or he might uproot a tree in an orchard that hasn’t yet borne fruit.”

Israel’s “Operation Protective Edge” rained death and destruction on the besieged population of the Gaza Strip for 50 days between July 7 and August 26, 2014. More than 1,400 civilians, including more than 500 children and 250 women, were killed. The maimed and wounded topped 11,000, and over 18,000 housing units were totally destroyed or severely damaged.

Reading such a list of statistics of casualties during war can outrage and horrify if one identifies with those who are killed—or simply identifies them as fully human. Feminist philosopher Judith Butler, in her book Frames of War: When Is Life Grievable?, writes about war as a time when lives are divided into those considered fully human— and thus grievable—and those that are not. She argues that naming and singularizing the people who are killed in war, and experiencing grief on their behalf, can move us to action: “Open grieving is bound up with outrage, and outrage in the face of injustice or indeed of unbearable loss has enormous political potential.” When there is a terrorist attack in Brussels or Paris, the New York Times will devote space to profiles of the individuals who were killed. When there is a similar attack in Beirut or Ankara, we are rarely offered this kind of specific eulogy.

Until relatively recently, mainstream U.S. media narratives have relegated Palestinian lives to the category of the ungrievable. Their deaths, while perhaps unfortunate, have been explained as the consequence of an intractable conflict in which Palestinians are rarely, if ever, considered to be “innocent” victims, except perhaps for Palestinian children. But even here, when the New York Times counted civilian casualties from Operation Protective Edge, Palestinian boys between the ages of 15 and 17 were not tallied as minors, but instead were included within the category of what the Times’ Jerusalem Bureau Chief Jodi Rudoren called “a mix of male civilians and combatants.”

The antidote to this kind of dehumanization is a voice of witness. Social media now provides real-time updates from war zones, belying official government propaganda. Voices from Gaza emerged during the 2014 war through Twitter feeds and Facebook posts. One teenage girl, Farah Baker, became a media sensation because of her poignant Twitter updates during the bombings. And increasingly Palestinian voices are being heard on the editorial pages of mainstream news outlets. Atef Abu Saif, a Palestinian novelist and political scientist from Gaza, kept a daily wartime journal, selections of which appeared in the New York Times, The Guardian, Slate and elsewhere as the war raged.

The newly published collection of those journal entries, The Drone Eats With Me: A Gaza Diary, is an eloquent, intimate, and searing account of family life during wartime.

Through Abu Saif’s journal, the reader comes to know his wife, Hanna, his four young sons, Talal, Mostafa, Naeem and Yasser, and his daughter, Jaffa, who was only 19 months old that summer and to whom the book is dedicated. Relatives, neighbors and friends are introduced, but characters of almost equal importance are the faceless drones that hover above our narrator’s head and the nameless drone operators who sit at a safe distance deciding whom to target for death.

“Our fates are all in the hands of a drone operator in a military base somewhere just over the Israeli border,” he writes. “The operator looks at Gaza the way an unruly boy looks at the screen of a video game. He presses a button and destroys an entire street. He might decide to terminate the life of someone walking along the pavement, or he might uproot a tree in an orchard that hasn’t yet borne fruit.”

In addition to the metaphor of the video game, another image used repeatedly in the book—and referenced in its title—is that of the drone as a dinner guest. Several weeks of Operation Protective Edge occurred during the Muslim holiday of Ramadan. As Abu Saif imagined it, when his family sat down together for their pre-dawn meal, the whirring, buzzing drone was there as well. He writes, “The food is ready. I wake the children and bring them in. We all sit around five dishes: white cheese, hummus, orange jam, yellow cheese and olives. Darkness eats with us. Fear and anxiety eat with us. The unknown eats with us. The F16 eats with us. The drone, and its operator, somewhere out in Israel, eats with us.”

Not only does the drone eat with them, the drone is also a predator looking to fill its belly. The drone is hungry, and the war itself is a ravenous hunter feasting on the people of Gaza. Abu Saif refuses to allow the mounting casualties to be just numbers—in his narrative he tries to give particularity to the lives devoured. He resents the notion that he himself might be reduced to a name mentioned in a media roundup of those killed that day: “I do not want to be a number, a piece of news, a name on the tongue of a beautiful TV presenter waiting impatiently to finish reading boring news from Gaza.”

Abu Saif shares the lessons he has learned, having lived through the wars on Gaza, about how to stay alive, knowing that these rules he invents for himself may or may not protect him and his family. His descriptions of the toll of the war are often vivid and terrifying. “To see death, to touch it with still-living flesh, to smell its saliva, to feel it in your hands, around you, on every corner of the street,” he writes. “To witness its brutality, its vulgarity, its mercilessness. To watch as bodies are scattered about in piles in front of you like discarded exam papers outside a school at the end of term, like old letters torn up by a jilted lover, like the paperwork of a bankrupt businessman piling up at the back of his shop. One leg here, one arm there, an eye, a severed head, fingers, hair, intestines … nothing belongs to anything in particular.”

In addition to inviting the reader into his home, into the coffee shops, schools, streets and markets of Gaza, where people who cannot flee what has been aptly referred to as a vast, open-air prison attempt to evade the seemingly insatiable Israeli war machine, his narrative implicitly calls on us to act. He asks: “Who will convince this generation of Israelis that what they’ve done this summer is a crime? Who will convince the pilot that this is a mission not for his people, but a mission against them? Who will teach him that life cannot be built on the ruins of other lives? Who will convince the drone operator that the people of Gaza are not characters in a video game?”

When the apparatus of war reduces his neighbors, his family and himself to faceless, ungrievable statistics, Abu Saif doesn’t merely try to give voice to the victims; just as importantly, he attempts to bestow a name and an individual subjectivity upon the faceless killer who guides the machinery of death. He preserves the—at least potential— humanity of the drone operator whose virtual presence at the family table represents, for Abu Saif, both the threat of imminent destruction and the hope for eventual justice.

Nancy Kricorian, whose most recent novel is All The Light There Was, has been on the national staff of CODEPINK Women for Peace since 2003.