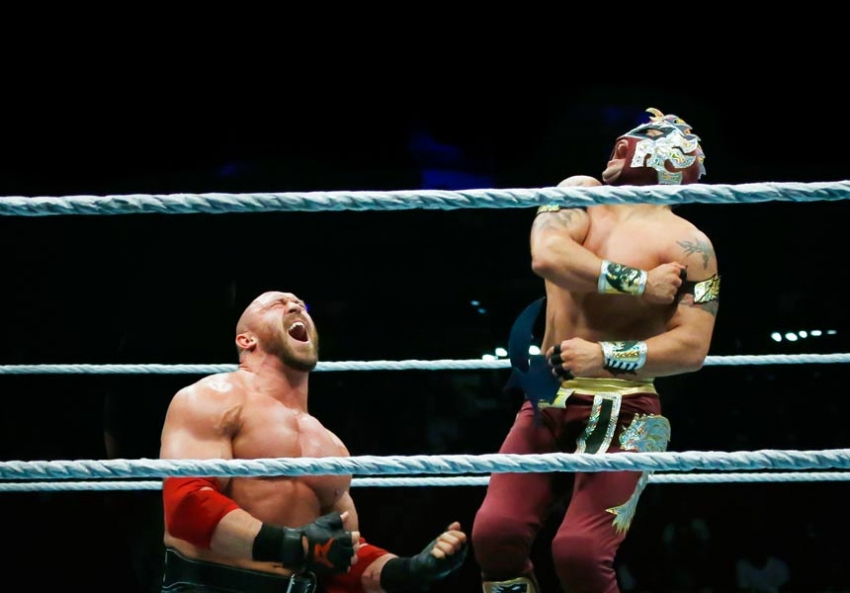 Ryback vanquishes Kalisto (in the mask) in Paris on March 22. Ten days later he took a stand on wrestlers' rights. (Thomas Samson/AFP/Getty Images)

On May 3, the wrestler Ryback, a generic strongman notable for his penchant for quoting The Secret, revealed on Tumblr that he had asked to be removed from World Wrestling Entertainment (WWE) television over ethical concerns about the disparity in wrestlers’ pay. “It blows my mind,” he wrote, “how in a sport which is pre-determined from a company standpoint, winners are paid so much more than the losers.”

Ryback’s speaking out has once again encouraged hope of labor action within the sport. As wrestling journalist Abbey Arthur noted in an op-ed in Top Rope Press, “It’s long past time these men and women realize that no promoter can punish them or hold them back or hold them down if they present a united front.”

In the 1980s, Jesse “ The Body” Ventura tried to unionize WWF wrestlers over issues regarding the abuse of contractor status. (In 2002, after a legal battle with the World Wildlife Fund, the company changed its name to WWE.) Wrestlers were barred from working for other companies even though they were not employees and most received no healthcare or other benefits. The WWE has a near monopoly on pro wrestling and sets the industry standards.

Ventura’s organizing effort was quashed by Vince McMahon, then-owner of the WWF, when Hulk Hogan revealed Ventura’s plans to company management. Four decades later, conditions remain the same and a culture of silence has descended over the industry—a silence broken when Ryback stepped up to say the emperor had no clothes.

Before Ryback’s post, I was not his biggest “mark” (fan, in wrestling parlance). I found his character unimaginative and his tagline, “feed me more,” vaguely Randian. But as a wrestling journalist and occasional performer myself, I’m increasingly concerned about sustainability and worker safety. Ryback’s post struck a chord and reminded me of another performer who recently broke the silence in another industry in which I work: pornography.

Most wrestlers, even those who work for the WWE, don’t receive healthcare. Abscond with the steel chairs and the top rope and you’re still left with people at peak human condition pretend-hitting each other hard enough to suspend disbelief, even if only for the duration of a belly-to-back suplex. Addiction to painkillers and steroids (both used in the healing of work-related injuries) is widespread.

Each of these habits can be fatal: opioids most commonly through over-dose and steroids through heart disease. Male wrestlers ages 45 to 54 have a mortality rate 2.9 times that of men in the wider U.S. population. In 2011, The Wrestling Observer published a report comparing the lifespans of wrestlers to those of other athletes. Fourteen of the 51 performers from WrestleMania VII (1991) had died—nine from drug overdose or heart attacks—whereas the starting lineup of that year’s Super Bowl were all alive, and only two of the 44 boxers to hold a major world championship in 1991 (WBC, WBA, IBF and WBO) were dead.

And thanks to the blurring between reality and script, management in both of these industries also have outsize control of their performers’ next-most- valuable asset: their public personas.

In pro wrestling, with outcomes scripted and predetermined, a wrestler’s skill and value are largely dependent on how a “match” is staged. Despite this, the “winners” are paid more. Should a wrestler leave or be let go from the WWE, their ability to draw work on the independent circuit relies on those fabricated win-loss ratios. Lose enough and you are pigeonholed as a loser, or “jobber,” for the rest of your career. If promoters want to undermine a wrestler’s career, they can saddle the wrestler with embarrassing gimmicks, book the wrestler to repeatedly lose in prominent matches and, in the WWE’s case, confine the wrestler to non-televised matches.

Imagine, if you will, that Sean Bean (Ned Stark in Game of Thrones) is auditioning for a movie role, and the producer tells him, “Sean, thanks for showing up. Unfortunately, since you were killed on Game of Thrones, I don’t think our viewers will find you believable.” This is an occupational consideration in wrestling, where the need to protect their perceived skill leads many wrestlers, most notably union-busting Hulk Hogan, to avoid (at all cost) scenarios where they “lose clean” (lose a match without outside interference or cheating).

This control not only gives management the upper hand, but encourages infighting among workers Wrestlers can sabotage each other via “no-selling” (acting unfazed by an opponent’s move and making them appear weak), refusing to lose a match when told to, or “stretching” (purposely trying to hurt or even injure an opponent, often at the behest of a displeased promoter or as a hazing technique).

The International Entertainment Adult Union (IEAU) is still getting off the ground and has yet to establish locals. But one of its first acts was to write internal disciplinary procedures to prevent performer-on-performer abuse and sex with people under 18. The union is also pushing for unemployment insurance, which would safeguard performers from being coerced by financial necessity to work for producers who won’t abide by safety measures. Basic Labor 101 stuff.

The IEAU is run largely by retired performers, however, which raises concerns around how well it can represent the active workforce. Its president, Sean Michael, announced in late May that he will be pushing for a minimum age of 21 for performers. This excludes workers between 18 and 20 who make up a large portion of the industry—teen/barely legal being a consistently popular subgenre—and who are particularly vulnerable to exploitation.

Many wrestlers likewise remain silent about the exploitative nature of their business. It’s likely that they not only fear having their livelihoods threatened, but also fear being seen as a victim. Wrestlers are supposed to be strong, almost superhuman, and male wrestlers are supposed to be hypermasculine. We’re more comfortable seeing a man kicked in the head until unconscious than hearing him admit he has been taken advantage of, harmed or victimized by his corporate employer.

Jetta Rae is a writer and editor based in Oakland. She delights in bringing intersectional politics into pro wrestling, pinball, kaiju films and other seemingly frivolous pursuits.