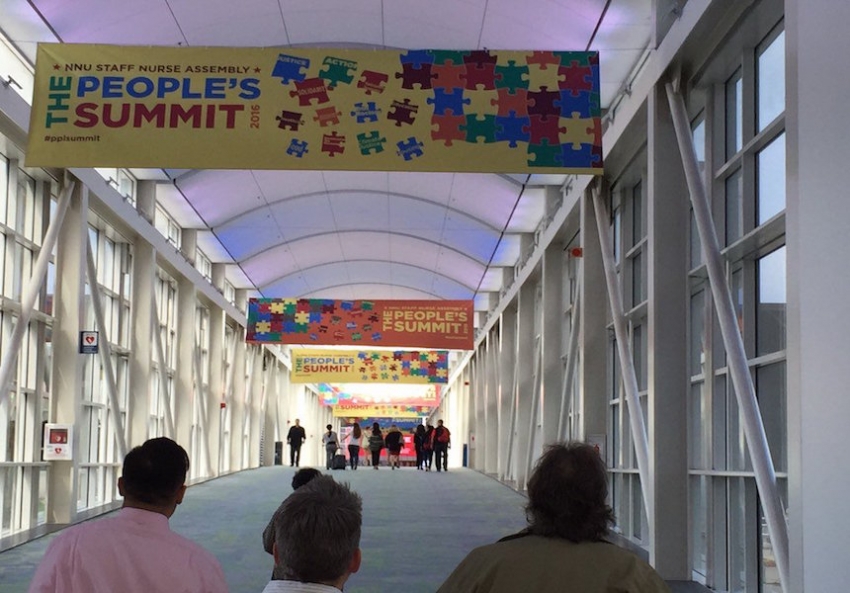 At the People’s Summit, Activists Plot How to Take Bernie Sanders’ Revolution Down Ballot

Participants are looking to carry their momentum on to local races around the country.

'We also have to remember that movements produced this moment,' said Naomi Klein. 'There would be no Bernie moment without the Fight For 15, Keystone XL, the movement against fracking, Black Lives Matter, the immigrant rights movement, all of it.'

Over 3,000 Bernie Sanders supporters convened in Chicago for the People’s Summit last weekend. “That we have come together is not a coincidence,” said Summit host and executive director of National Nurses United (NNU) RoseAnn DeMoro in her opening remarks. “How we stay together is the challenge before us at the People’s Summit.”

Many said they were politicized by the Sanders candidacy. Others, like the dozens of People’s Action organizers attending the summit, said they have been doing the work of building independent progressive political power for years.

“A movement to build institutions that are grounded in a world view and a set of people, not a political party, and to do down ballot candidate development,” has been in motion for years, says People’s Action co-director George Goehl. People’s Action is the result of this year’s mammoth merger between National People’s Action, U.S. Action and Alliance for a Just Society.

I came from New York City, where Team Bernie NY—independent of the Sanders campaign—has amassed a list of 50,000 Sanders supporters and 5,000 volunteers in the state. Team Bernie NY is now supporting Debbie Medina for State Senate, working with Democracy at Work to support worker co-ops, and some in their network are working on Paul Newell and Robert Carroll's campaigns for State Assembly.

“Whether it’s a campaign or an organization we’re working with to pass a piece of legislation, it’s a collaborative relationship,” says Tascha Van Auken, a co-founder of Team Bernie NY and former Obama for America organizer. “So we’re maintaining the autonomy as the grassroots, we’re maintaining the power we’ve been able to built up together over the last 11 months.”

In introducing the conversation, Miles Mogulescu of the Huffington Post said he hoped “the Sanders campaign doesn’t go the way of Occupy, which had an impact but disappeared. We need permanent organization to drive a permanent revolution.”

Genevieve Lysen, of Maine People’s Alliance, spoke of recently winning a majority of Alliance-backed candidates on the Lewiston City Council, where they are now pushing a progressive budget, and immigrant and tenant protections. “We are learning now what it is to govern,” Lysen said. This year, she said, the group—thanks in part to energy from the Sanders campaign—is running 40 candidates for local office across the state.

“I don’t want to see another national email list organization,” she told the audience. “The question is how to direct all the Bernie energy to organizations with real staff and volunteers on the ground.”

Reclaim Chicago, which helped oust Cook County State’s Attorney Anita Alvarez—who had tried to cover up details of the the police killing of 17-year-old Laquan McDonald—combined their 2016 campaigns for local progressives with an influx of Sanders supporters, who helped double the group’s volunteer base and the number of people in the organization now willing to run for office. “Our organization was there to receive them,” said Reclaim Chicago’s new executive director Amanda Weaver.

Since launching in November 2014 the group says they have helped elect three progressive aldermen in Chicago and defended the eight incumbent members of the City Council’s Progressive Reform Caucus. And in 2016 they played a large role in five state legislature campaigns including the first Asian-American woman to win a democratic primary in state history.

Michigan United’s Elisheva Johnson spoke of similar tactics, and how they’re being used to elect school board members and prosecuting attorneys to slow the school-to-prison pipeline.

All the groups stressed the importance of maintaining grassroots independence and developing an organizing pipeline that begins with focusing on constituents’ concerns and developing volunteers into leaders that may one day run for office. “It’s easier to get your issues through if it’s your own people in office,” said Lysen.

Brand New Congress, launched by Sanders supporters this April with the intention of replacing the U.S. Congress with people committed to Sanders’ platform, is grappling with a similar question: How to recruit and vet candidates. Right now they are still in their first stage of recruiting grassroots candidates; the group, whose founders include Wikimedia Foundation’s former chief revenue officer and lead “Bernie Barnstorms” organizer Zack Exley, came into the weekend with one official partnership with a local Bernie group.

At another breakout, titled “Down Ballot Revolutionaries,” Weaver and other People’s Action organizers from Maine, Michigan and Chicago, and Progressive Democrats of America challenged participants to either run for office or to find someone who would.

The focus on local and state elections echoed a message Sanders himself pushed on the eve of the Summit. “We need to start engaging at the local and state level in an unprecedented way,” Sanders said in his address to supporters on June 16. “We need many [of the volunteers that worked on the campaign] to start running for school boards, city councils, county commissions, state legislatures, and governorships.” Some 6,700 Sanders supporters have since said they would be interested in running for office.

“It is all of our responsibility in this room,” said Melissa Rubio, political director for Illinois State Representative Will Guzzardi and organizer with Reclaim Chicago, “to take the energy from the Bernie campaign and place it into local elections, and to challenge ourselves to think, ‘Am I going to run for office?’ ”

The message seemed to work. “I always make excuses,” said Cierra Pennington of West Virginia Citizen Action Group, “that I’m going to run when I’m older—in my 30s.” But after meeting people her age and younger at the Summit who are running for office, she said she is now “thinking more seriously about running for State House in the next two years.”

One such inspiring young candidate is Carlos Ramirez-Rosa, 26, a former Illinois Coalition for Immigrant and Refugee Rights organizer who, with the backing of Reclaim Chicago as well as numerous other unions and progressive groups in the city, became Chicago’s youngest alderman last year. Or Abel DeMarcos, 18, who is running for city council in Flint, Michigan. Or the countless others who announced their candidacy in popcorn style throughout the weekend.

And though the newfound enthusiasm for taking over local, state and federal branches of government has many electrified, there was a consistent caution throughout the conference not to forget the social movements that made all this possible.

“It’s important to remember that elections are not movements,” DeMoro said from the outset, “but they can be a moment in a movement.”

“There has been this migration from the streets to forming political parties,” said progressive author and activist Naomi Klein, speaking of Spain’s Podemos and Greece’s Syriza parties.

“But we also have to remember that movements produced this moment. I think we have to do something really complicated, where we have to build out all of these electoral possibilities while understanding that these politicians will be nothing unless they are backed by social movements and accountable to those social movements. There would be no Bernie moment without the Fight For 15, Keystone XL, the movement against fracking, Black Lives Matter, the immigrant rights movement, all of it.”

Speaking to some friends in Spain, who went “from the squares to Podemos,” she said, there has been a realization that the move toward electoral politics hurt their power in the street. “Syriza [in Greece] as well.”

On the final morning of the conference, participants split up into groups by state. “A lot of them are meeting for the first time here,” says Goehl, who facilitated the state-based breakouts. “That’s big.”

Jefferey Spicer, a Detroit resident working on local ordinances to reform employer background checks across Michigan, said at his breakout session that Michigan United, an NPA affiliate, and groups that sprouted during the Sanders campaign realized they were trying to do the same thing. That morning, he said, they began to talk about how to work together.

“We talked about how we can support each other,” said Minneapolis resident Hamza Mussé of the Minnesota/Wisconsin combined breakout session, “and how we can move into elections.” Mussé, a recent college graduate, said this summer will be his first political campaign. He’s planning to help Ilhan Omar, a 33-year-old Somali woman, win the Democratic primary and oust a 22-term Democratic-Farmer-Labor Party incumbent Phyllis Kahn in the Minnesota State Senate. “[Omar] represents the constituents, diversity and the young energy that’s taken over Minneapolis,” Mussé said.

One next step, Goehl told me, might be to convene state-based People’s Summits across the country.

The exact details of what will happen next remain hazy. But whatever shape the post-Bernie future takes, many activists seemed to feel the Summit offered a good start. Thousands of email addresses and phone numbers were exchanged and a space for reflection and strategizing was provided within what the Summit’s website calls “a time of tremendous turmoil and progressive opportunity.”