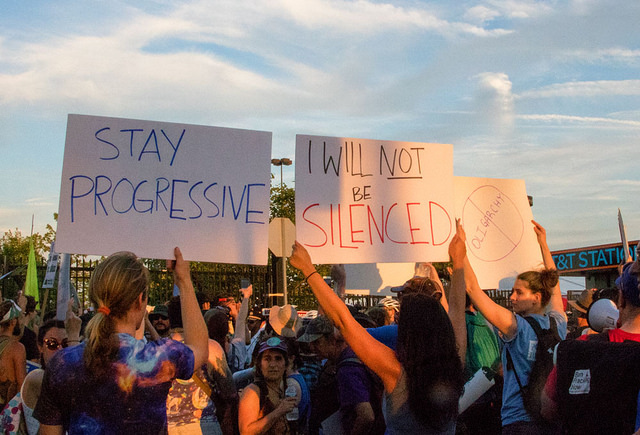 Three Sanders delegates talk about the convention and share their thoughts on the future of the Democratic Party. (Becker1999/ Flickr)

Bernie Sanders’ Delegates Speak Out About Convention: “They Painted Us As Crazy”

Will the Democratic Party embrace its insurgent wing?

'Bernie’s not the ceiling of what we can achieve in the Democratic Party. He’s the floor.'

Since the Democratic National Convention last week, there’s been a lot of ink spilled about Bernie Sanders’ delegates—the rowdy, disruptive group of 1,900 that could be heard on television and in the Wells Fargo Center booing Donald Trump and Hillary Clinton alike.

Sanders’ army was among the convention’s most active participants, leading chants against party elites and staging protests from the floor. Annoyed, more than a few pundits took swings at those delegates, chiding them as everything from “suicidal Marxists who work at TGI Friday's” to “a fanatical, disruptive minority.” And, though a recent poll from the Pew Research Center found that some 90 percent of Sanders’ supporters will back Clinton come November, reporters swarmed the Bernie-or-Bust crowd.

The question now—for those interested in carrying on the political revolution Sanders sparked—is not what will become of votes for Sanders, but what will become of the manpower and campaign infrastructure that recruited them? Can the Democratic Party embrace its insurgent wing, or will it close ranks and steel itself against pressure from below?

In These Times recently sat down with three Sanders delegates to hear their reflections on the convention and their thoughts on the future of the Democratic Party. Like many others, each knocked on doors and planned out efforts to elect Sanders at the state and national level. Waleed Shahid, a delegate from Pennsylvania, is deputy director of membership for the Working Families Party. Charles Lenchner, from the New York delegation, is co-founder of People for Bernie, a project on which Moumita Ahmed—also from New York—organized with as founder of Millennials for Bernie.

Their comments have been edited and condensed.

Was being a delegate what you expected? What was the scene like on the floor?

Waleed Shahid: I think the delegates who are the most diehard Bernie supporters came in expecting some sort of contestation or floor fight even though Senator Sanders said that wasn’t going to happen. All the speeches made it seems like Hillary was already the candidate, and that rubbed the Bernie delegates the wrong way. I went in knowing she’d be the nominee, but I think other delegates maybe didn’t understand the process as thoroughly.

It was weird. You’re there sitting next to mayors and governors, and, for a lot of the Bernie delegates, it’s their first time being involved in the political process. Now they’re sitting next to the political elite. Hillary delegates seemed confused and annoyed with the Bernie delegates. The body language and the way we were being treated didn’t speak to what they were saying on stage about opening the party up to people like us. They were looking around at each other asking, ‘Why are all these young people excited by a socialist 74-year-old from Vermont?’ If they don’t understand that, they’re in for a surprise.

Moumita Ahmed: I didn’t know that we were there as almost a show rather than people with actual minds who were there to express what they saw through the election. Most people expected delegates to show up, cheer and have a great time nominating Clinton. We did have a great time in the Bernie delegation, but we made sure we expressed ourselves. We came out and held signs and things, not necessarily bashing Hillary but showing that we want to ban fracking and stop the TPP, and that we support Palestinian human rights. These aren’t issues that are ‘anti-Hillary Clinton,’ just policies she hasn’t fully adopted. We were trying to represent the people we were there for.

Party officials did everything they could to take our signs and credentials away, and not let the issues be at the front of the DNC. I was told to hush and not boo New York Gov. Andrew Cuomo, which—I think—shows a difference in the way each side handles corrupt politicians. I questioned what really is the role of a delegate. To a certain degree, we may have changed the rules there a little bit.

Charles Lenchner: I didn’t really have expectations. The state delegations didn’t feel like a welcoming place for Bernie delegates. Every morning we showed up at breakfast where the speakers were almost all either union officials or elected officials, and basically none of them supported Sanders. It’s almost like party leaders hadn’t figured out that they need to cultivate these people, and don’t want us around for the future. They assume that we’re irrelevant for the long term.

The front rows on the convention floor all had reserved signs on them for elected officials, some of whom were delegates and superdelegates. Some were neither. Those were also being held for VIP guest passes, issued nine to one in favor of Hillary to Bernie people. It was a physical reminder that we were seen as less than the other team. The Democratic National Committee’s goal was explicitly to hide us and cover up any signs we had. They got what they wanted, but they also created a lot of ill will from hundreds of thousands of Bernie people who viscerally experienced how the party establishment doesn’t want them around.

Do you think what you saw came across in how the media was covering the convention?

MA:  I don’t think they accurately represented how people felt. They credited everything we did to Bernie-or-Bust or Jill Stein and the Green Party. Most delegates weren’t Bernie-or-Bust. We all understand that, ultimately, Trump needs to be defeated, and that—especially in swing states—you need to support Clinton. They painted us as crazy.

CL:  The common wisdom about political conventions today—and it’s not wrong—is that the purpose of the convention is to be a television ad for your candidate. So the mass media and DNC work together to have a fine show. What’s lost in that is that a convention could be, or should be, about actual democracy—people having disagreements, forming new coalitions. The work of politics isn’t always pretty. Why don’t we reserve the unity celebration for days three and four? Bernie delegates who don’t have a lot of money raised money to participate in the convention, only to find out that participation involves free breakfasts and parties, and cheering on demand.

What was the most surprising thing about the convention?

WS: I wasn’t expecting to feel as sad as I did to see Sanders on stage. It was a really bittersweet moment. The media covered the walkout, which was a small percentage of delegates. But a much larger percentage of delegates left the convention floor and either went to the lobby or went to a bar downtown. They weren’t protesting. They were sad. There’s a real fear that a lot of the relationships and infrastructure people built through the Bernie campaign is going to disappear overnight.

MA: I was really surprised at how ideological some of these party people are. They’re mad that Bernie is an independent who ran in the Democratic Party. Some of us were talking about open primaries, and they just hated that.

I gave one woman, a Clinton delegate, a sign that said ‘I Support Palestinian Human Rights.’ She wanted to wear it, but her friend said, ‘We can’t do that, we’re not allowed to.’ They don’t want to question party leadership on any level. Even the simple thing of taking a button and putting it on your body is a big no-no for them. I didn’t think the party was this authoritarian.

Will Sanders' supporters back Clinton in the fall? What do you think are the main challenges to party unity?

WS: The vast majority of Sanders’ supporters are going to be voting for Clinton in 2016. But people are upset at the status quo, and unfortunately Hillary represents that. When the Democratic Party leaders and Clinton say that America is already great, it doesn’t sit well. America’s only great when people come together to make that so. Young people are looking for a way to participate that acknowledges that our system is broken. That’s a huge vacuum right now, and progressive leaders and organizations need to step up into it.

MA: I think the vast majority of people are going to support Clinton. It’s in the party establishment’s interest just as much as ours to work together, but I don’t see them doing their part. Their focus is too much on fear-mongering and all of this anti-Trump rhetoric. They’re not tapping into the source of the suffering that most people are feeling, and why they got involved in this political revolution in the first place. I don’t see them bothering with that, and it really worries me.

CL: In swing states, particularly, the vast majority of Bernie supporters are going to vote for Hillary. The appearance of their being massive dissent from Bernie people was an optical illusion. If you’re on team Bernie but are resigned to team Hillary, you’re not going to rush to get press.

Do you think the Democratic Party is worth fighting for? Why? Did you leave the convention pessimistic or optimistic about its future?

WS: I left feeling very optimistic about the party’s future, and hopeful about having lower-case “d” democrats overtake it. Bernie’s not the ceiling of what we can achieve in the Democratic Party. He’s the floor. I’m hopeful we can learn from what went well and what didn’t this cycle with the Sanders movement. In the coming years there’s a lot of space for us to fight, both within and outside the Democratic Party. I don’t think all political change is going to happen in the Democratic Party. It’s just one field of battle.

MA: There is a divide within the party, and a rising progressive wing that I want to help succeed. The way the DNC acted at this convention doesn’t give me hope. What gives me hope is all the people who supported Bernie, and who are now trying to fight within the system to start organizations and elect people like Bernie.

CL: It’s possible to win power outside of the two-party system, but what you’ll find is that one of them will swallow your issue. The GOP became the party of abolitionists because there were too many abolitionists that voted. I think the Democratic Party is a battleground. You can either play on it to win, or you can abandon it to the enemy. And I would rather play on it to win.