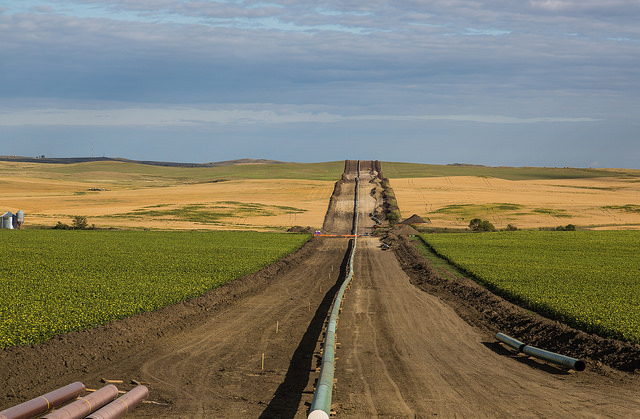 Warren has a reputation as a wheeler-dealer and visionary in the pipeline business. (Tony Webster/ Flickr)

"The most wealth I’ve ever made is during the dark times,” Warren told a Bloomberg reporter last year.

The Dakota Access Pipeline has catalyzed one of the biggest mobilizations against a piece of fossil fuel infrastructure since the Keystone XL’s defeat last year. One section of the four-state pipeline would run through the land and water mains of North Dakota’s Standing Rock Sioux, a fact that has prompted snowballing demonstrations along its proposed route. Since protests began in mid-August, activists from around the country have flocked to join the Sioux and other tribes to stop the project’s construction. Over Labor Day weekend, private security protecting the Dakota Access’s construction deployed dogs and pepper spray on activists attempting to block it.

Behind both the pipeline and the private security is a company called Energy Transfer Partners (ETP), whose majority sponsorship of the $3.7 billion project means it has the most on the line of anyone. (Oil giants Marathon, Phillips 66 and Enbridge also hold smaller stakes.) Behind ETP itself is billionaire and rock and roll music enthusiast Kelcy Warren, who—with his extra spending money (he’s worth more than $4 billion)—owns a label that exports “lyrics-driven folks music” from his Dallas Fort-Worth area compound. But there’s more to Warren, the company’s chairman and CEO, than his music and commanding share in the focal point of the environmental movement’s biggest fight of 2016.

He also likes making money off of disasters.

When energy trading giant Enron collapsed in 2001—and $2.1 billion of employee retirements with it—Warren bought its pipeline holdings at a discount.

More infamous was his alleged attempt to try to turn a profit on Hurricane Rita. Warren was accused by federal regulatory agencies of taking advantage of the storm that caused $12 billion worth of damage and prompted the largest evacuation in U.S. history. One case, filed by the Commodity Futures Trading Commission (CFTC), charged ETP and three of its subsidiaries with manipulating natural gas prices in Houston in the fall of 2005, using Rita as a pretext for their scheme.

Here’s how the CFTC says it worked: First, ETP and company took out a short position on the Houston Shipping Channel’s (HTC) October 2005 financial basis swap. To radically simplify things, that means they essentially placed a bet on the price of natural gas going down in the Houston area that autumn. As residents fled in advance and in the wake of the storm, demand for gas plummeted and sent prices down. The CFTC alleges that ETP and its subsidiaries stockpiled gas around Rita to deliver to HTC post-storm, attempting to further drive down demand and gas prices, and make good on their wager that prices would dip.

The same year the CFTC case was filed, and in coordination with that agency, the Federal Energy Regulatory Commission (FERC) accused ETP of similar misdeeds from 2003 to 2005.

Both cases were settled out of court, with Warren’s company paying $10 million to the CFTC (split among the company and its three subsidiaries) and $30 million to the FERC. ETP’s payment to FERC was the largest sum FERC had collected to date after being granted new regulatory authority by the Energy Policy Act of 2005.

And Enron and Rita weren’t the only times Warren found a silver lining in disasters: a collapse in the price of oil presented another opportunity. Unlike companies that deal directly in extraction, ETP’s business—concerned with the transportation and processing of fossil fuels—avoided the kind of massive hit that plagued other fossil fuel companies. Long-term contracts inked before oil prices dropped insulated Warren from the impacts of a tanking market. And as smaller, more diversified companies folded under the pressure, ETP could swoop in to buy them out, in part or whole. In the last several years, it snapped up former competitors Sunoco and Southern Union, earning Warren a reputation as a wheeler-dealer and visionary in the pipeline business.

“The most wealth I’ve ever made is during the dark times,” Warren told a Bloomberg reporter last year. The headline read: “Pipeline Billionaire Kelcy Warren Is Having Fun in the Oil Bust.”

If activists at Standing Rock get their way, though, the coming years could get much darker for Warren—and harder to make money off of than any crisis he’s faced yet.