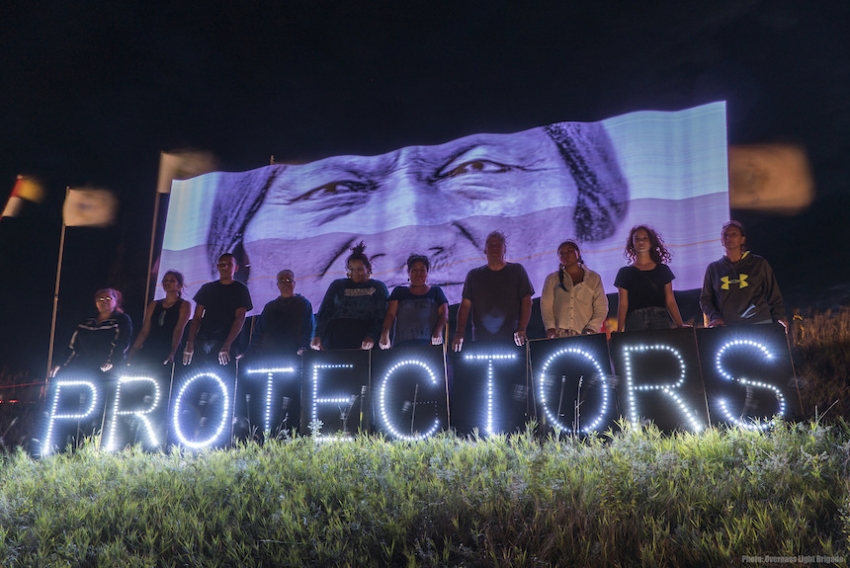 After months of protest by Native tribes, the federal government has issued an order to stop the pipeline, reversing a judge’s ruling made earlier in the day.

But while the fight against the pipeline will continue—and the Obama administration’s step today has bought protesters some time—its fate still remains to be decided by Washington.

The state that saw the rise and fall of America’s shale gas boom is once again at the center of its energy politics. Responding to months of sustained protests, in the Great Plains and nationwide, the Obama administration stepped in today to stop the controversial Dakota Access pipeline in its tracks—at least for the time being.

The pipeline, a $3.7 billion, 1,172-mile behemoth threatening to cut through four states, several sacred sites and the Missouri River, has attracted dissent from Native groups and thousands of others looking to stop it from being built. Since April, demonstrations—led by the Standing Rock Sioux, whose land lies along the pipeline’s proposed path—have bloomed into the largest Native American uprising in U.S. history, with support from thousands more around the country.

Today might be their biggest day yet. After granting a temporary restraining order to the Sioux against pipeline builders earlier in the week, U.S. District Judge James A. Boasberg today denied the Standing Rock Sioux’s request that construction be postponed until the conclusion of their lawsuit against the Army Corps of Engineers, the regulatory body overseeing the project. Filed in July, the suit alleges that the Corps overstepped regulatory process in approving permits at 200 water crossings for Energy Transfer Partners (ETP), the primary company backing the pipeline. The tribe argues that the project, in addition to violating several federal laws, poses a thread to burial grounds and water supplies. Today’s ruling seemed to mean that ETP will be permitted to begin construction on these locations.

“The Court scrutinizes the permitting process here with particular care,” the one-page ruling reads. “Having done so, the Court must nonetheless conclude that the Tribe has not demonstrated that an injunction is warranted here.” The tribe will return to court for a status hearing on the wider lawsuit on September 16, and is already working to appeal Boasberg’s ruling.

En route to the capital in Bismarck, LaDonna Allard of the Standing Rock Sioux and Camp of Sacred Stones told In These Times by phone that, “We stand and we pray. We stand for the water.”

Counteracting the ruling shortly after it came down, however, was a joint statement from the Department of Justice, the Department of the Army and the Department of the Interior. Citing a need for further review of the pipeline’s route “bordering and under” Lake Oahu, the agencies write that “construction of the pipeline on Army Corps land bordering or under Lake Oahu will not go forward at this time,” essentially squashing the project for the foreseeable future. They add that the fight over the pipeline “has highlighted the need for a serious discussion on whether there should be nationwide reform with respect to considering tribes’ views on these types of infrastructure projects,” outlining government-to-government consultations to happen over the fall on existing and potential approval frameworks.

In addition to stopping the pipeline, today's statement—like Obama’s dismissal of the Keystone XL pipeline last year—solidifies the role the federal government can play in stopping private infrastructure projects. If only temporary, the administration’s decision sets an encouraging precedent for opponents of both the Dakota Access pipeline and similar infrastructure projects.

Despite encouraging signals from the federal level, the fight over the pipeline is far from over, as Dakota Access may still be able to continue building on other sections of the pipeline’s route. The fight is also now more militarized than ever. In anticipation of today’s ruling, officials in North Dakota had taken a drastic route to contain protests, which turned violent last weekend when private security hired by ETP, sicced dogs and pepper spray on activists. Alleging that protests had become threatening to local residents, Gov. Jack Dalrymple (R-ND) held a press conference yesterday to announce the activation of the state’s National Guard. Air Force Maj. Amber Balken, a spokeswoman for the Guard, said that some two dozen soldiers have moved into place near demonstrators, with another 100 on call.

“The decision by the Governor to call in the National Guard is an unnecessary escalation in an already tense moment,” says Dallas Goldtooth, an organizer of protests in North Dakota with the Indigenous Environmental Network. “It doesn’t serve any good purpose other than to create greater tensions on both sides of the fence.” He emphasized that the encampment remained committed to nonviolent direct action, and that he did not expect any major confrontations with Guardsmen.

“I don’t expect the [National Guard] to make any moves. I believe they’ll stick to barricades,” Goldtooth told In These Times. “No one intends to raid the camp, or anything of the sort.”

Though the Guard has been activated for protests against the war, for civil rights and—most recently—for racial justice in Ferguson and Baltimore, this is the only time it has been used for a demonstration either on legally-recognized native land or against a piece of fossil fuel infrastructure.

But while the fight against the pipeline will continue—and the Obama administration’s step today has bought protesters some time—its fate still remains to be decided by Washington, which will determine whether the pipeline is allowed to run over federal lands writ large. At a meeting between the Corps and several tribes yesterday in Omaha, Neb., protesters were told that the call on whether to go ahead with the project is now being punted to D.C. The Corps has said they would grant an easement for the project, and will now send a request for approval over to Congress, which has two weeks to either debate the project or wait for it to be automatically approved. This is standard procedure, and Congress generally sits on Corps requests until they are automatically approved after two weeks.

Anti-pipeline advocates, though, hope this time will be different.

“What this does is places an issue that Congress has said they have nothing to do with in their lap,” says Oliver “OJ” Semans of the Native Organizers Alliance, who was in the meeting with the Corps in Omaha yesterday and helped lead a protest outside. “Regardless of what state you’re in, you have a voice in whether or not the DAPL and all of the baggage it carries with it goes forward.” Seams added that the Corps gave a verbal commitment to notify tribes as soon as the Corp’s easement request is received in Washington.

At the urging of indigenous and environmental groups, Bernie Sanders (I-VT) has now joined protesters in trying to make sure the Dakota Access does not pass through Capitol Hill quietly. After issuing a statement opposing the pipeline in late August, he introduced an amendment on Thursdayevening “to prohibit the granting of a certain easement until the date on which an environmental impact statement…is completed”—language almost identical to that used in the suit filed by the Standing Rock Sioux. That amendment is itself an amendment to one proposed by Sen. James Inhofe (R-OK)—of the Energy and Public Works Committee—to the Water Resources and Development Act, now being debated on the Senate floor.

Every seat in the House of Representatives is up for re-election this fall, along with 34 in the Senate. Semans—now with Sanders’s help—hopes to turn the Dakota Pipeline into an election issue, making or breaking lawmakers’ chances come November. “You’ll be seeing direct action in Washington DC, the House, the Senate and at the White House,” Semans said, adding that he hopes organizers at the local level will also ramp up pressure at officials’ home offices.

As in the fight against Keystone, the decision over the Dakota Access pipeline’s approval could ultimately end up in the Oval Office, where activists hope it will end. Jane Kleeb—a prominent anti-Keystone voice and, now, incoming leader of Nebraska’s Democratic Party—put out a statement lateThursday night calling on President Obama to stop the construction, as well as for Congress “to take seriously the issue of eminent domain for private gain and stop the abuse of land taking by corporations when they receive the land easement from the Army Corps.”

She and fellow incoming party leaders Frank LaMere and Tom Tilden also requested that Congress convene hearings with tribal nations and landowners “so their concerns about the climate, land and water can be heard and acted upon.”

As Steve Horn points out at DeSmog Blog, the Dakota Access has enjoyed an abbreviated approval process thanks to its Nationwide 12 (NWP 12) permits, granted by the Corps to fast-track the project through traditionally more rigorous environmental and public review. Fossil fuel industry groups—including Warren Buffett’s Berkshire Hathaway Energy and the American Petroleum Institute—submitted comments to the Corps to ensure the permits stuck, while comments from a collection of environmental organizations alleged that the Corps and the Obama administration had abused NWP 12 powers to advance both DAPL and other pipelines, including the southern leg of the now-defunct Keystone XL.

And while North Dakota has served as the epicenter of opposition to the pipeline, parallel legal battles are being fought elsewhere along its route. In Iowa, for instance, farmers have argued to a district court that the company behind the pipeline, Dakota Access LLC, has not proven its project represents the kind of public good necessary to trigger eminent domain. The Yankton Sioux Tribe, in South Dakota, have also sued the Corps along with the U.S. Fish and Wildlife Service for issuing approval permits for the project.

Between protests in North Dakota, Sanders’s amendment, lawsuits in several states, solidarity demonstrations around the country this week, and—now—the Obama administration’s intervention, ETP is facing a tougher path to DAPL approval than they could have expected. Still, the fight against it is far from over. And—as with Keystone—it could drag on for months and even years to come. According to Semans, though, ETP and other fossil fuel companies have already learned one major lesson from the showdown in Standing Rock: “We’re not going away. We’ve been here since the beginning of time, and we’re going to be here to fight that pipeline.”