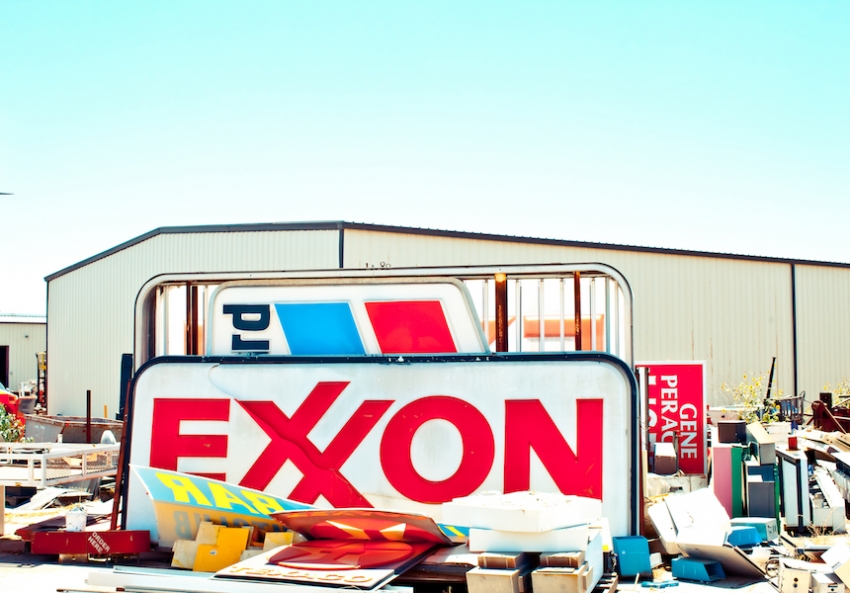 Decades ago, Exxon conducted research on climate science and found evidence of global warming. The corporation is now under fire for allegedly covering up its findings. (Thomas Hawk / Flickr / Creative Commons)

"If any companies in the oil industry defrauded the public or their shareholders in their well-documented disinformation campaign on global warming, then that is a matter for the state Attorneys General and the courts, not the Committee on Science."

ExxonMobil has the right to deny climate change. At least that’s what the chair of the House Committee on Science, Space and Technology, Rep. Lamar Smith (R-Texas), argued in his committee’s hearing this week.

The Attorneys General (AGs) of New York and Massachusetts are currently investigating whether Exxon—after its own scientists had discovered evidence of climate change—defrauded the public by arguing against its existence. Also at issue is the fact that the company hasn’t reported the value of its assets in two years.

Smith, in turn, alleges that these investigations represent an infringement of the Texas-based company’s First Amendment rights to go against scientific consensus on climate change, and subpoenaed the offices of AGs Eric Schneiderman of New York and Maura Healey of Massachusetts, requesting thousands of documents pertaining to the investigation for the committee to review. Also subpoenaed are 350.org, the Union of Concerned Scientists, Greenpeace and several other environmental organizations, law firms and foundations.

“The Committee has a constitutional obligation to conduct oversight anytime the United States scientific enterprise is potentially impacted,” Smith said in his opening remarks Wednesday, adding that the purpose of the subpoenas is to find out whether the AGs’ investigations are having a “chilling impact on scientific research and development.” He went on to raise concerns about the investigations’ impact on the “imbalances” of federally funded scientific research, between that which affirms the existence of climate change and those who downplay or deny it.

None of the offices or organizations being subpoenaed are complying. “We have absolutely nothing to hide,” says Lindsay Meiman of 350.org. “But we know that these subpoenas are overreaching.” Asked about potential legal ramifications, Greenpeace USA’s Rodrigo Estrada Patiño tells In These Times “We’re in a wait and see moment.”

A rule change within the House at the start of 2015 allows some committee chairs to issue subpoenas individually, without a vote from the full committee. Smith convened the Wednesday hearing to “affirm” his authority to issue the subpoenas and collect the documents requested by them.

None of the three expert witness called by Smith to the panel hearing were scientists, and two, Ronald Rotunda and Elizabeth Price Foley, have ties to conservative and industry-friendly think tanks such as the Cato Institute and the Heartland Institute, which has received at least $676,500 directly from Exxon since 1998. Smith himself has collected nearly $700,000 from the fossil fuel industry since 1998. Perhaps unsurprisingly, then, the panel gave Smith the green light to move ahead with the subpoena.

“This hearing was essentially brought to you by Exxon,” says Lindsay Meiman, a spokesperson for 350.org. “While Smith is protecting the First Amendment rights of the fossil fuel industry, he’s infringing on the First Amendment rights of organizations like 350.” The 13 GOP representatives who signed an initial letter from the committee requesting documents from greens and AGs in May have taken in a collective $3.4 million from oil, coal and natural gas companies.

An investigation by Inside Climate News revealed last year that Exxon had been conducting cutting-edge research on climate science since the 1970s which found evidence of global warming. Despite these findings, industry lobbying groups such as the American Petroleum Institute—of which Exxon is a part—have mounted multi-million dollar campaigns to spread doubt on the science of global warming. As a result of those stories, a coalition of 17 state Attorneys General have vowed to hold fossil fuel companies accountable for their conduct on climate change, with AGs in New York, Massachusetts and California starting investigations into whether ExxonMobil has lied to the public about the existence of climate change. Schneiderman is also investigating why Exxon, unlike its competitors, has failed to write down the value of its oil fields as oil prices tanked.

When the Inside Climate News stories came out, Meiman said, “Our biggest fear was that this would go into the digital information overload [and be ignored]. We wanted to do everything in our power to make sure that didn’t happen.” In response, the group launched a campaign known as #ExxonKnew, kicking it off with a mock trial around the Paris climate talks last December featuring testimonies from scientists, journalists and people who have been affected by Exxon’s activities around the world. Several other groups—including many of those subpoenaed—have been running campaigns against Exxon as well, and publicly supporting state law enforcement’s investigations.

House Democrats have spoken out against Smith’s subpoenas. Ranking House Science Committee member Eddie Bernice Johnson (D-Texas) said Wednesday, “Fraud is not protected by the First Amendment. If any companies in the oil industry defrauded the public or their shareholders in their well-documented disinformation campaign on global warming, then that is a matter for the state Attorneys General and the courts, not the Committee on Science.”

Smith further said that the committee could further issue contempt of Congress citations to state Attorneys General—and potentially green groups, as well—who continue their noncompliance, though Schneiderman’s office has stated repeatedly that Smith’s committee has no right to interfere in the operations of either his office or those of his counterparts in other states.

This isn’t the first time activists have been questioned by a House Committee. The House Un-American Activities Committee was at the core of the Red Scare, becoming a prime vehicle for Cold War paranoia. In an effort to purge communists and sympathizers from the United States, many were sent to jail or blacklisted. (One of Donald Trump’s late mentors, Roy Cohn, was a key member of the prosecution team that sent suspected spies Julius and Ethel Rosenberg to the electric chair.)

The period had a devastating impact on the American left, alienating some of the most militant factions of the labor movement and rendering most openly left parties and organizations either illegal or irrelevant. The Taft-Hartley Act in 1947 severely restricted the kinds of strikes and campaigns unions could legally run, and granted employers a slate of tools to oppose rank and file organizing.

While Smith’s crusade on Exxon’s behalf might bear limited fruit, how the subpoenas are handled moving forward could set a precedent for both climate activists and others hoping to mount campaigns and legal challenges against corporations.

Greenpeace and 350.org are both hopeful that the Justice Department will pursue a federal investigation against Exxon, something Hillary Clinton has voiced support for on the campaign trail. Clinton, of course, has her own ties to the company, which has given between $1 and $5 million to the Clinton Global Initiative. Back in the summer, 350.org launched a campaign urging the Clinton Foundation to divest its fossil fuel holdings, and greens hope she’ll distance herself from the industry and come out more fully in support of a federal inquiry.

“Secretary Clinton knows that climate change is here and that action to combat it should be both ambitious and swift,” Cassady Craighill, also of Greenpeace USA, tells In These Times. “[She] must hold Exxon responsible for costing us decades on meaningful climate action.”