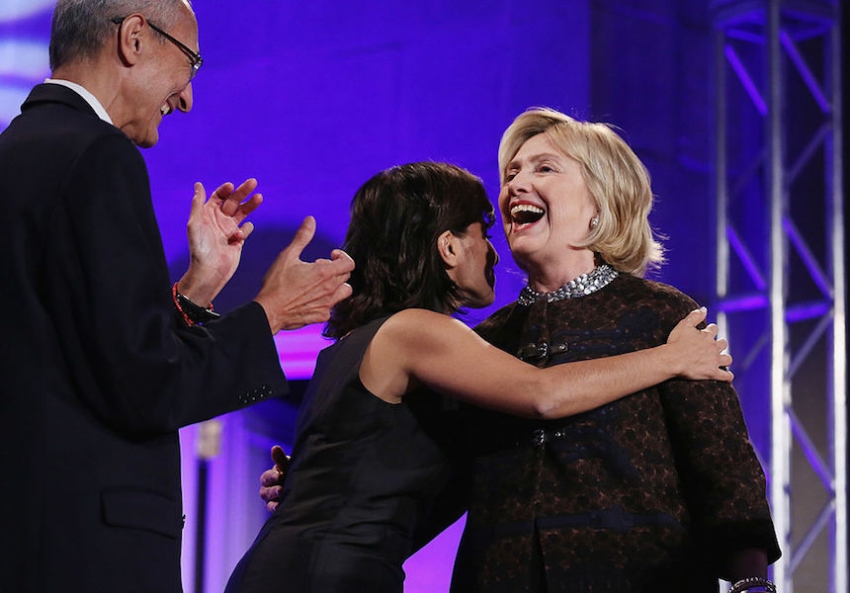 3 Reasons To Be Worried About the Blackstone Group—and Their Friend, Hillary Clinton

“Shadow banking” represents such a risk that one politician criticized Bernie Sanders’ plan to break up the banks as insufficient because it did not deal with the problem. That individual? Hillary Clinton.

Buried among the thousands of John Podesta’s emails released over the last week, you’ll find a short, revealing exchange between Hillary Clinton campaign chair John Podesta and Neera Tanden, president of the Center for American Progress and Clinton advisor-in-waiting.

“I saw Jon Grey [sic] today,” writes Podesta. “We both sang your praises.”

“He’s a really good guy,” she replies. “And given he will take over Blackstone, one to develop a real relationship with.”

Podesta and Tanden were talking about Jonathan Gray, the global head of real estate and member of the board of directors of the Blackstone Group, a Wall Street private equity firm that is now the largest single owner of real estate in the entire world. This wasn’t the only appearance Blackstone has made in the Podesta emails. Another thread from January 2016 shows Clinton staff trying to arrange a dinner with Gray and the company’s Number 2, Tony James, as well as Tim Geithner and Larry Summers, two former Obama administration officials widely credited with spearheading Obama’s soft-on-Wall-Street policies.

In fact, despite Tanden’s email, Blackstone already has substantial ties to Clinton and the Democratic Party as a whole. James not only meets regularly with both Obama and Clinton, but has held two fundraisers for Clinton in the past year, including one last month where attendees paid from $50,000 to over $100,000 to rub elbows with the Democratic candidate. Clinton is the second biggest recipient of Blackstone members’ money this cycle, narrowly behind Marco Rubio, and while the firm consistently gives more to Republicans, they’ve donated millions of dollars to Democrats in the past few years.

The mutual admiration between Clinton and Blackstone executives, and their attempts to woo each other, should concern anyone eager to see Clinton—at this stage, following the implosion of the Trump campaign, the likely winner of the election—follow through on a progressive agenda once in office. Blackstone has a less-than-stellar record of shady business dealings and red flags.

1) They’re in the slumlord business

After the housing crash left millions of U.S. homeowners underwater, Blackstone swooped in and lined its pockets from the misery of ordinary Americans. As homeownership rates have dipped, Blackstone, through its subsidiary Invitation Homes, has become the largest owner of single-family rental homes in the country, buying up tens of thousands of vacant, foreclosed homes.

As a 2014 In These Times investigation revealed, once these houses were occupied by tenants, Blackstone operated more as slumlord than landlord. Across the country, the company left homes in disrepair, shifting the responsibility of maintenance to tenants and ignoring constant requests to fix electrical and plumbing problems. One tenant had no less than six property managers over the course of a single year. In Atlanta, many tenants have no one to whom they can relay complaints directly, instead forced to navigate a straight-to-voicemail system.

Blackstone has violated tenants’ rights in other ways too. It has hit tenants with sudden, unreasonably quick evictions, in one case sending a resident a five-day eviction notice after the company’s own online payment system failed to deduct the tenant’s rent for the month. In other cases, it sent eviction notices before the rent was even due.

Such rapid eviction may be motivated by the desire to sell homes that have accrued in value.

The company also charges tenants as much as 180 percent of a city’s market rent and is not above raising the rent anywhere around 10 percent or more in lease reewals.

Following the deregulatory free-for-all of the late 90s and early 2000s, banks engaged in all kinds of risky behavior that ultimately tanked the global economy. While they were mostly let off with a slap on the wrist and a few harsh words, policymakers did institute some regulatory changes to prevent a future catastrophe. One of these was to increase scrutiny of lending.

This left many banks more reluctant to lend, and in response there’s been a trend toward “shadow banking,” or non-banks engaging in lending. According to a 2015 report by Goldman Sachs, “shadow banks”—of which Blackstone is one—are responsible for 41 percent of all lending, or nearly $5 trillion worth, while avoiding the same regulatory oversight as traditional banks.

Nor are shadow banks bound by the so-called Volcker Rule, part of the 2010 Dodd-Frank Wall Street reform bill. This bill prohibited banks from pursuing certain kinds of profit-driven trading, as well as restricting commercial banks’ investments in hedge funds and private equity.

“Shadow banking” represents such a risk that one politician criticized Bernie Sanders’ plan to break up the banks as insufficient because it did not deal with the problem. That individual? Hillary Clinton.

3) They want your retirement savings

The United States has one of the highest percentages of pensioners living in poverty in the world, with 21.5 percent of those aged 65 or older receiving an income less than half the national median. Blackstone’s Tony James’ solution to this problem, however, as he laid out in a January email to John Podesta, is not to make Social Security better funded, which he suggested isn’t “politically viable” or “implementable.”

Rather, James, together with the New School’s Professor Teresa Ghilarducci, collaborated on a retirement savings plan (called, fittingly, “the Retirement Savings Plan”) that would see workers and employers invest 3 percent of an employee’s salary each year into “high-yielding and risk-reducing alternative asset classes like real estate, hedge funds, managed futures and commodities.” Ghilarducci also happens to be one of Clinton’s advisers, and according to the email, Podesta expressed “interest” in the plan.

There are several things wrong with the scheme, however. Not only do hedge funds underperform—the Kentucky Retirement Systems, for instance, invests in a hedge fund that brought a return of 1 percent over three years, including a return of negative 8 percent in 2016—but they also siphon off profits in the form of exorbitant fees. For these reasons, pension funds have been abandoning hedge funds in recent years. As author Jane White pointed out, real estate and managed future funds aren’t particularly “risk-reducing” either. Not to mention the fact that the James plan would reduce employee contributions from 5 percent, already one of the lowest in the world.

Of course, even if such a scheme would hurt pensioners, it might serve to benefit companies that deal in real estate, hedge funds and managed futures. A company that is “the world’s largest discretionary investor in hedge funds.” A company like Blackstone.