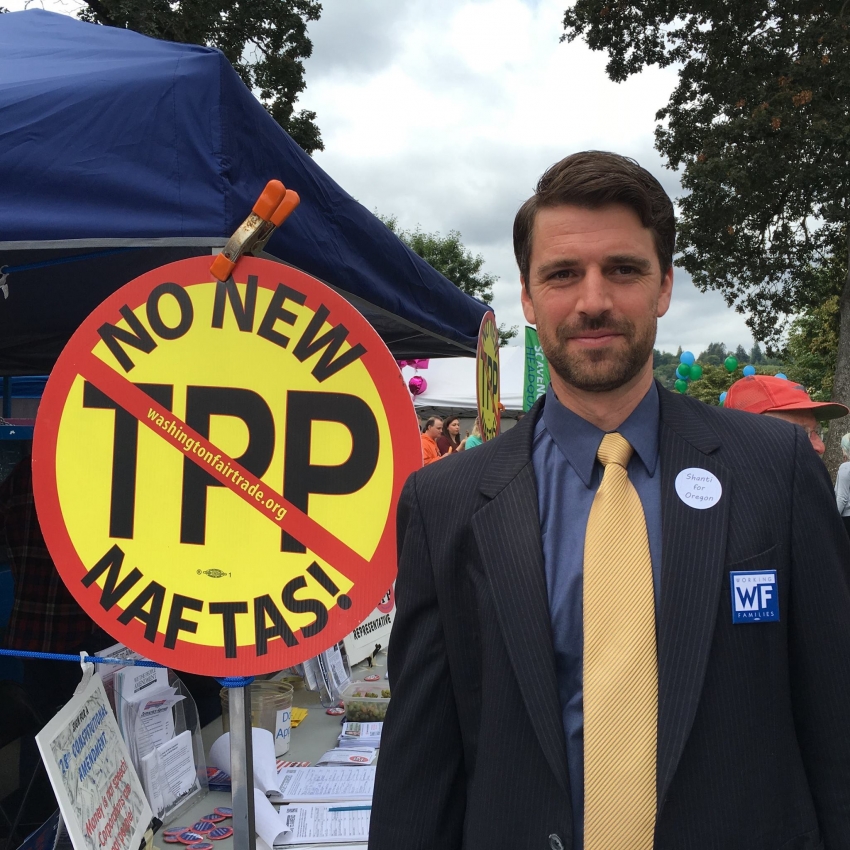 Shanti Lewallen took up the Oregon WFP’s offer to join the Senate race as its candidate. His Democratic opponent is Sen. Ron Wyden.

'It’s not that the Democrats don’t need labor. It’s that they take labor for granted.'

Shanti Lewallen will not be going to Washington, D.C. But running for the U.S. Senate with the Working Families Party in Oregon, he hopes he can make his mark on what happens there: Namely, stopping the Trans-Pacific Partnership (TPP).

Lewallen, 36, was raised by activists in rural Mendocino County, California, and his father was one of the state’s first Green Party gubernatorial candidates in 1994. In college, Lewallen organized around environmental issues, and in the early 2000s, he got involved in anti-war protests around the invasions of Iraq and Afghanistan. Facing bleak job prospects and working a string of odd jobs, he drifted in and out of poverty before becoming a longshoreman on Portland’s docks.

While he has since put himself through law school and opened a small private practice, Lewallen still makes most of his income as a dockworker. He’s a member of the International Longshore and Warehouse Union and is deeply involved in the labor movement. In 2014, he joined the statewide board of the Working Families Party (WFP), populated—as it is in other states—by representatives from Oregon’s unions.

This spring, Lewallen took up the Oregon WFP’s offer to join the Senate race as its candidate, declaring his run in June. Founded in 1998, the WFP endorses candidates running inside and outside of the Democratic Party in about a dozen states and in Washington, D.C., while organizing its members to support a host of progressive issues and ballot measures. In Connecticut, Oregon and New York, it sponsors a Working Families ballot line that allows voters to back progressive candidates from a range of parties, in a process known as fusion voting.

Lewallen’s Democratic opponent is Sen. Ron Wyden, who co-sponsored legislation—with Republican juggernauts Paul Ryan, the House Speaker from Wisconsin, and Sen. Orrin Hatch, from Utah—to grant the administration fast-track authority in passing the TPP. That authority foreclosed Congress’s ability to amend or filibuster the deal or do much of anything besides vote on it. Like similar agreements, the TPP would encourage businesses to offshore jobs to countries with lax labor and environmental standards, and—through controversial investor state dispute settlements—grant corporations the ability to sue sovereign governments should their laws infringe on profits.

Wyden’s zeal to pass the agreement has made him, as Politico reported, the “public face of the Democrats’ division over trade policy,” and it has put him at odds with the party’s progressive wing. Pro-trade Democrats have never been more disliked than in 2016, facing attacks from Donald Trump on the right and Vermont Sen. Bernie Sanders on the left. Even Hillary Clinton—who championed the North American Free Trade Agreement (NAFTA) alongside her husband in the 1990s—was pushed to oppose the agreement after years of pressure from labor and environmental groups.

The TPP, Lewallen says, is an “accepted state of affairs among Democrats.” And he’s eager to change that, especially as Barack Obama prepares to pass the TPP through a lame duck session of Congress post-election. “It’s frustrating for me to hear Donald Trump become the spokesperson of reforming trade, and addressing the marginalization of the working class,” Lewallen adds.

Given the WFP’s base in labor, the TPP is a hallmark issue for the party. It’s also been one for Barbara Dudley, founder of the Oregon WFP who has held senior posts in the AFL-CIO and Greenpeace. NAFTA-style free trade agreements have eliminated some 75,000 jobs in Oregon, she says, rendering trade an especially salient issue for the state’s voters.

“Oregon has a lot of exporting industries, but it has also lost its timber industry,” Dudley notes. “Rather than milling the logs here in Oregon, we now export raw logs to China. Go down to the docks where they used to export milled timber, and you’ll see piles of raw logs going out across the ocean.”

Not getting taken for granted

As Democrats go, Wyden is as establishment as they come. Having been in Congress since 1981, the Kansas-born lawmaker has earned a reputation for fierce bipartisanship, going to bat with Republicans on everything from carbon emissions to tax reform. He teamed up with House Speaker Ryan to put Medicare on a voucher system, and he voted for the Patriot Act. He also takes six-figure donations from companies like Nike, though its cofounder, Phil Knight, tends to back the GOP.

All of Wyden’s challengers oppose the TPP, including Republican Mark Callahan, which may be why Wyden has refused to debate any of them over the course of the race. In a distinctly progressive state like Oregon, then, Lewallen’s candidacy is premised on a pretty simple logic: With no risk of helping elect a Republican (Wyden has a nearly 100 percent chance of winning), he can cudgel a Democrat and raise the issue’s profile.

Because his chances of winning are so slim, the state’s AFL-CIO has not endorsed Lewallen, and his campaign has raised an almost endearingly paltry $3,550 from institutional funders, mainly unions. “Ideally,” he says, “we’ll make it a taboo to take money from corporate interests that are trying to offshore jobs and make sure that banks aren’t regulated.”

On the ground, Lewallen has garnered support from the volunteers who helped hand Sanders the state’s primary in May. Tapping into that network in the future, Lewallen hopes to work with the state’s WFP to craft a “stronger and better-prepared challenge to a wayward Democrat,” and he has considered making a run himself for state legislature in the next few years.

“It’s not that the Democrats don’t need labor. It’s that they take labor for granted,” Lewallen says. “That’s something that has to change. Given how far right the Republican Party has gone, the Democrats are comfortable taking environmentalists for granted and consumer and human rights advocates for granted, too.”

Dudley places the concern around trade that has re-emerged this election cycle in a movement context, linking its newfound prominence to rabble rousing by Occupy and the movement for black lives. “If we look at trade broadly, we can use it as a vehicle to talk about what kind of global economy do we want,” she says, noting that the fight against the TPP could catalyze a larger and more powerful left, capable of contesting for power at the state, local and—eventually—federal level.

“After a lifetime of movement politics,” Dudley says, “I decided to pitch in and help start a Working Families Party … precisely because we had to address the issues of state power. It wasn’t good enough to just be advocates. There are more and more people getting there.”

In the wake of the Sanders campaign, Dudley has seen another generation of movement organizers, Lewallen included, reach a similar realization, even while understanding that politics is—as she says—“a miserable, dirty place to do work.”

“This is part of a slow awakening that’s been happening since the Battle in Seattle (the protest against the World Trade Organization in 1999), through the wars and through the Obama campaign and through the various crises since,” Lewallen says. “Politics now is not a taboo topic. Coming up in the 1980s and ‘90s, people didn’t bother talking about it. I think there’s an understanding now that we absolutely have to have a role.”