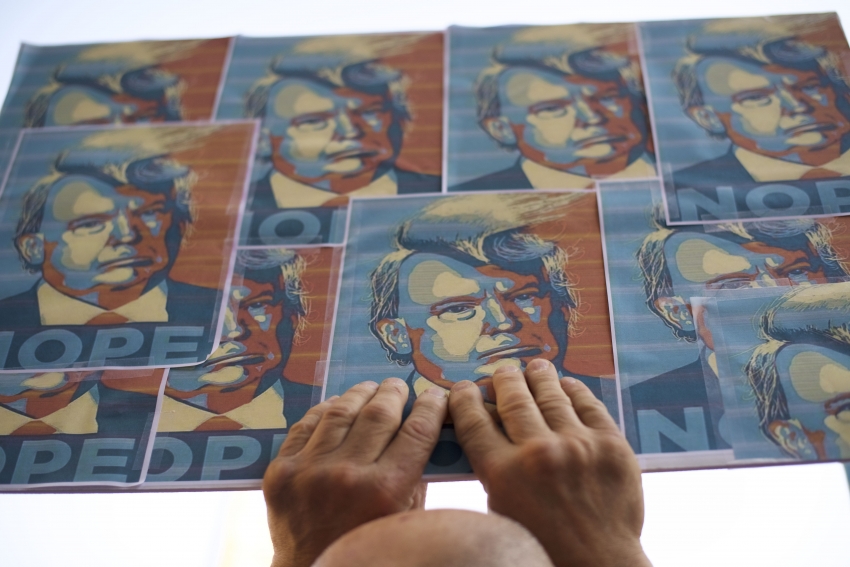 On Inauguration Day, Don’t Go to Work. Don’t Buy Anything. We Need A National Strike to Stop Trump.

Editor's note: Marianne Hastings is a pseudonym. The author of this piece chose not to use her real name out of concern that she could face workplace retaliation for speaking out against the Trump administration.

As protests against the election of Donald Trump continue, many have called on demonstrators to give the president-elect a chance, to “wait and see” what he does in office.

But those curious about Trump’s immediate priorities need look no further than his “Contract with the American Voter,” which he released in October. In it, he effectively promised that by the end of April he would cancel many of President Obama’s executive orders that protect workers, immigrants and the environment; begin barring millions of Muslims from entry to the U.S.; imprison or deport millions of undocumented workers; cancel all federal funding to sanctuary cities and climate change programs; lift restrictions on shale, oil, gas and coal extraction; fast-track pipeline projects and kick millions of people off their health insurance. Many of these promises are executive actions that Trump will be able to enact without the cooperation of Congress. These are what the Trump campaign has called the “First Day Project,” which Trump based on signing at least 25 executive orders that would seek to “erase … the Obama Presidency.”

As individuals and groups that oppose this agenda, there is no time to wait. Trump has been clear about his goals, and he has begun assembling a team to effectuate those goals. Resistance is already taking various shapes in communities across the country, but we need a mass action that unites all those that oppose the Trump agenda from day one. On January 20, 2017, we need to launch a general strike and boycott. Some are already calling it a “Sick Out” to capture the spirit of the reason behind not going to work on that day.

As individuals, we have three primary sources of power: as voters, as workers and as consumers. Donald Trump was victorious at the polls and, despite the undemocratic nature of the electoral college, he is entitled to assume the presidency. He is not, however, entitled to carry out his destructive agenda unopposed. Though we were not successful as voters, we can stop him by using our power as workers and consumers.

A general strike and boycott, or Sick Out, would be a commitment not to go to work or buy anything on January 20. It would not focus on any single cause or demand; instead, it would be a show of our collective power in opposition to Trump’s extremism.

This action will show the country and the world that we will not participate in Trump’s America as he has described it. It will do so in the most powerful way possible—by shutting down, as much as possible, the nation’s economy. The goal will be to force corporations and politicians to publicly distance themselves from Trump’s agenda. The U.S. economy is a massive, complicated machine that runs on predictability and regularity. Disrupting it through a general strike and boycott imposes a cost on accepting Trump’s extremism.

Americans have an uncanny ability to get used to the extreme in short order—we must take action before a sense of normalcy sets in.

Can we really pull such off a nationwide action? And what happens if we try, and fail? At the very least, a national Sick Out will show us where we stand. If true resources and organization are put into the endeavor, and people go to work and continue shopping as if nothing has changed, then it will be a show of weakness on our part. But that too can be useful. Not going to work or buying anything is not a lot to ask of most individuals for something they care deeply about. If, despite our best efforts, this cannot be done now—when the wounds are still fresh—all future organizing will have to reflect this difficulty.

Furthermore, a Sick Out does not foreclose opportunities for future actions in response to specific policies that the Trump administration will introduce. But we’ll be in a better position to do so if we mobilize now to show politicians and corporations what is at stake if Trump follows his stated path, and show all participants what is possible in resisting. This is our strongest weapon, and waiting to display it would be a mistake. In the immortal words of Dr. Strangelove, “the whole point of a Doomsday Machine is lost if you keep it a secret.”

January 20 is only 59 days away, and it has become increasingly apparent that there was no contingency plan for dealing with a Trump administration and a GOP-controlled House, Senate and Supreme Court. Groups can engage in all other manner of resistance on Inauguration Day, from protests to sit-ins, but a general strike and protest can bring all these actions under one unified and powerful umbrella whose message cannot be misinterpreted.

There is a great deal of planning and organizing that must happen in the next 59 days. First, all institutions—from labor to civil rights groups, environmental groups, immigrant groups, churches, synagogues, mosques, and all others who oppose the Trump agenda—must work together to spread the word and coordinate such a massive undertaking.

At the same time, we must create structures to make this action as inclusive as possible. That means setting up child care centers, mechanisms for helping those that rely on services that might not be available during the strike, devoting funds to support those that cannot afford to miss a day of work, and coordinating a public strategy to protect workers who may be disciplined or targeted for participating.

There should be no illusions that this will be easy or smooth, but it is necessary. We cannot allow Trump’s extremism to be normalized and take shape in our institutions of government.

The message of a nationwide Sick Out on Inauguration Day will help prepare people for the multiple acts of resistance that will be required by us, in so many parts of our lives, if we are to avoid the worst over the next four years. The only thing holding us back from engaging in this collective action is our hesitancy to believe that it is possible.

Marianne Hastings is the pseudonym of a worker and organizer calling for a national Sick Out on Jan. 20, 2017.