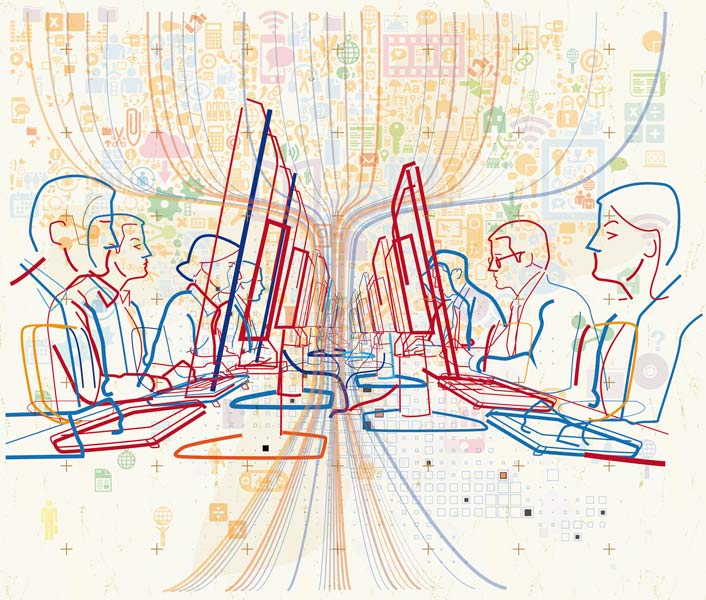 Thomas Friedman’s Latest Book Is a Tour Through His Troubled, Neoliberal Mind

We read 500 pages of corporate platitudes and ungainly metaphor so you don’t have to.

This witless, reflexive endorsement of corporate prerogative runs so deep in Thank You for Being Late that even Friedman’s cautionary environmentalism is steeped in it.

Pity New York Times columnist Thomas L. Friedman: His credulous take on the frenetically wired, capital-M Market (as he likes to call it) may have earned him a world-class reputation as a plugged-in pundit and sent him trotting around the globe, but lately it’s been tuckering him out. That’s why this breathless Market savant has titled his latest doorstop-sized manifesto Thank You for Being Late—a phrase, he explains, that he inadvertently blurted to a guest who turned up late to one of the D.C. power breakfasts he hosts for the sake of scaring up column fodder. Friedman had used the unscheduled bit of downtime to conduct an overdue inward inventory. Amid the daily crush of prestige thinkfluencing, Friedman suddenly realized, “I needed permission to be alone with my thoughts.”

If this sprawling miasma of buzzwords is any indication of what happens when Friedman is left alone with his thoughts, we’d better hope he keeps furiously breakfast-scheduling.

It’s hard to say just what the organizing conceit of Thank You for Being Late is, except an impressionistic tour of the things occupying Tom Friedman’s mind. It opens in the classic fashion of many a Friedman column: with a random encounter with a service-sector employee. Friedman learns that a parking-garage attendant in his tony D.C. suburb of Bethesda, Md., an Ethiopian immigrant named Ayele Z. Bojia, authors a politics blog focused on combating corruption in his homeland. Thinking of his own vocation as a columnist, Friedman starts to riff, with an ungainly grasp of metaphor truly unparalleled among today’s pundits:

When I refer to the world’s big gears and pulleys, I am talking about what I call ‘the Machine.’ … To be an opinion writer, you need to be carrying around a working hypothesis of how the Machine works. … If you don’t have a theory … you’ll either push it in a direction that doesn’t accord with your beliefs, or you won’t move it at all.

It goes on like this, unfathomably, for nearly 500 pages. Friedman revisits the harum-scarum themes of his past business-advice bestsellers, such as The Lexus and the Olive Tree and The World Is Flat: The world is getting smaller—i.e., more interconnected—as digital innovation quickens. Global warming, overpopulation and deforestation are also accelerating. The incapacity of humans to adapt to the bewildering pace may well jeopardize civilization and the planet alike.

The diagnosis is unobjectionable, but Friedman’s catch-all remedy is stunningly obtuse: Re-engineer all human institutions for the digital age. Sure, jobs will be displaced, livelihoods jeopardized and worker autonomy sacrificed on the altar of digital acceleration, but hey, “Jobs have always come and gone thanks to creative destruction. If horses could have voted, there would never have been cars.”

Ha, good one, Tom! This witless, reflexive endorsement of corporate prerogative runs so deep in Thank You for Being Late that even Friedman’s cautionary environmentalism is steeped in it. Mother Nature, he burbles, is “relentlessly entrepreneurial,” possesses a welter of “killer apps” and knows that “allowing the weak to die off unlocks more resources and energy for the strong.”

As we learn from Friedman’s interviews, the owning-and-managing class’s digitally upgraded brand of social Darwinism is remarkably of a piece with that of its strike-breaking, time-managing robber-baron forebears. “When I walk into a subway and see someone playing Candy Crush … on their phone, [I think] there’s a wasted five minutes when they could be bettering themselves,” Zach Sims, founder of the digital coding combine Codecademy.com, tells Friedman.

It’s clearly a short step, in the Big Data scheme of things, for grimly purposeful managers like Sims to digitally surveil their employees, and perhaps give them a brisk jolt to the fingers should they furtively activate the Candy Crush icon—a striking contrast to the book’s titular plea for more precious time for the maunderings of the digital power elite. The only consolation is that the Friedman op-ed generator—a genius online fount of Friedman-branded futurespeak—will soon set him on the path to obsolescence.