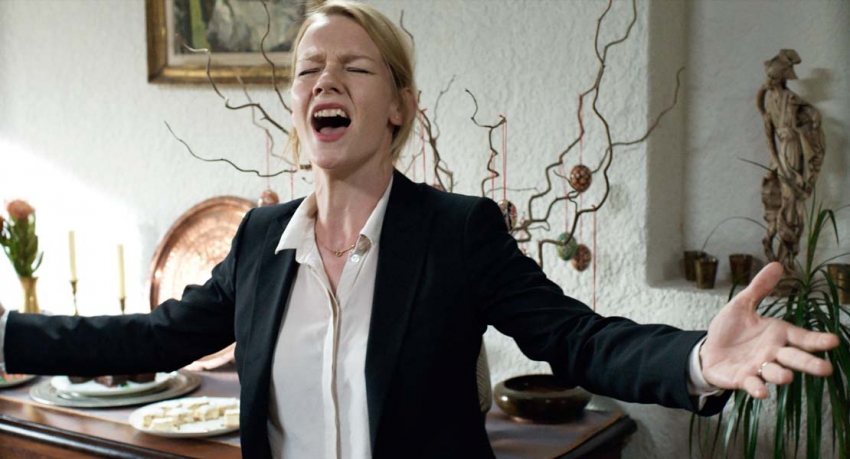 This Christmas, Go See a German Comedy About Consulting. No, Really.

Filmmaker Maren Ade’s Toni Erdmann takes a wise and whimsical look at the struggles women face in the corporate world.

It's certainly fearless and one-of-a-kind, despite a narrative template that smacks of Hollywood.

Toni Erdmann, from German director Maren Ade, emerged from the Cannes Film Festival this spring as perhaps the most lavishly praised European film of modern times. The critics filing from the front lines could barely keep from imploding with awe. Kent Jones rhapsodized in Film Comment that the movie “encompasses so many strands of experience that it eats the material of several decades of movies for breakfast,” while Nick James, editor of Sight & Sound, reported that it is “probably the best film at blindsiding the audience I can remember seeing. The press screening was noisily appreciative to a level I’ve hardly ever experienced here.” Everyone agreed it should have won every prize (it received only the International Federation of Film Critics’ award). It broke the record for the most stars (3.8 of 4) in ScreenDaily’s Cannes critics’ poll.

For a comedy, from Germany? Hype, from even the wisest critics, can dull the experience of any film, so ideally Ade’s eccentric, willfully impulsive comedy would be allowed to trundle out into the cultural marketplace unduly burdened by expectations. It may not be a life-changer, but it’s certainly fearless and one-of-a-kind, despite a narrative template that smacks of Hollywood. Winfried (Peter Simonischek) is a bearish, 60-something music teacher and slovenly child of a man devoted to anarchic irreverence. He can’t keep himself from wearing fake Mortimer Snerd teeth in public and making up absurd identities for himself every time he meets someone new. An aging, divorced vestige of the progressive Willy Brandt era, Winfried is an agent of nonconformist chaos, but in a genial, shrugging way that no one in the film can ever find irritating.

That is, except his semi-estranged daughter, Ines (Sandra Hüller), a buttoned-up, lean-in corporate loner, married only to her career as a management consultant, working in a sea of suited men. Upon the death of Winfried’s beloved dog (named Willy, natch), he follows Ines to Bucharest, where her firm is busy managing layoff strategies for a Romanian oil company. His aim is mysterious, but seems to have something to do with disrupting Ines’ cold-blooded professional life and thereby saving her soul. Winfried infiltrates Ines’ workplace situation under the nom de prank “Toni Erdmann,” masquerading as an ambassador or consultant (depending on whom he talks to), but always in a cretinous rock-star wig everyone just agrees not to acknowledge.

But then Toni Erdmann evolves, and grows both in its capacity for embarrassing its characters, which is nearly epic, and in its organic warmth for these characters, whose mutual history seeps out of the action like humidity. There are entire set pieces you never see coming that transcend what you thought the story was—moments of neurotic unraveling, of collective near-madness, of father-daughter connection echoing long-gone family moments we’re never told about. To know more—to know how Whitney Houston figures into this, not to mention a hirsute Bulgarian kukeri costume—might dim the film’s fabulous whimsical spark.

Built into its DNA is a deft critique of corporate capitalism and the roles women have to play to succeed within it, acted out on Hüller’s tightly pinched, Laura Linney-on-ice countenance, as Ines navigates a man’s world while simultaneously sidestepping her father’s invasive presence. The punch it packs regarding father-daughter issues is more ambiguous, though undeniable. Simonischek, with his shambling body language and sad eyes, is almost iconic, but Hüller is the movie’s quickly beating heart, handling scenes (the party that quickly devolves into a nudist experiment) that would challenge any thespian on the planet.

This is Ade’s third film, and it dwarfs her other work, if for no other reason than it seems to have a life of its own. It’s easy to imagine the movie “just happening”—as a free-form psychology experiment, perhaps, rather than scripted. It may not be the greatest festival film of the new century, quite. But I’ll say this: Movies this inventively generous and organically unpredictable should be, in a proper world, produced dozens of times a year, as a matter of routine.