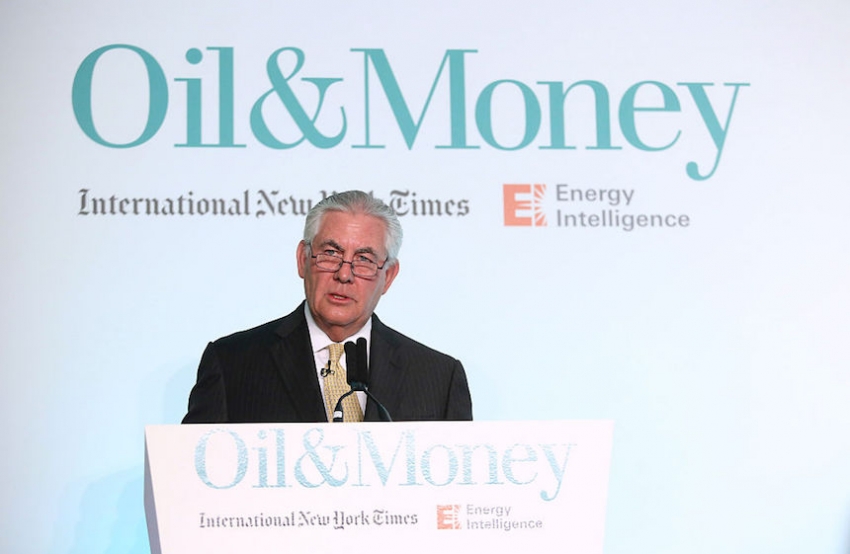 Rex Tillerson at the Oil and Money 2015 conference in London. (Chris Ratcliffe/Bloomberg via Getty Images)

As Secretary of State, Exxon’s CEO could do enormous damage to the climate.

Like the industry itself, ExxonMobil is engaged in trench warfare with the potential for a livable planet; for a likely shot at keeping warming under 2 degrees celsius, nearly 70 percent of known fossil fuels reserves must remain underground. The alternative is truly catastrophic: rampant food insecurity, increasingly deadly and frequent storms and untold levels of displacement. Never mind that 5 million people worldwide are already dying each year from the non-climate-related effects of burning fossil fuels.

Despite all this, much of the coverage of Tillerson’s transition into the State Department has either ignored or downplayed potential climate impacts, instead focusing on his ties to Russian President Vladimir Putin (whose government, U.S intelligence sources claim, interfered with this year’s election). The New York Times story announcing that Trump would be picking Tillerson Monday night skipped mentioning climate entirely.

His connections to Russia aren’t insignificant: Tillerson has spent years pivoting around the State Department’s policies toward Russia, managing Exxon’s dealings there. He was awarded the country’s Order of Friendship in 2013. As Steve Coll, author of 2012’s Private Empire: ExxonMobil and American Power, put it, “Tillerson has favored doing business in countries that offer political stability, even if this stability was achieved through authoritarian rule.” Joe Romm at ThinkProgress points out that Tillerson’s appointment could also green light a $500 million plan between Russian state-owned oil firm Rosneft and Exxon to develop drilling operations in the Arctic, a plot previously squashed by sanctions. Romm also observes that if Trump and Tillerson pull out of the Paris agreement, Russia—the world’s fifth largest emitter—may also refuse to ratify it.

Are Tillerson’s ties to Russia worrying? Yes, and not least of which because they could lead to expanded fossil fuel extraction and exploration. But arguably even more worrying are the broader threats Tillerson’s appointment poses to the climate, and to a future defined by anything other than widespread political, economic and ecological crisis.

As Secretary of State, Tillerson would be in charge of green-lighting border-crossing pipelines like Keystone XL. He would also head the U.S. delegation to international climate talks, tasked with negotiating a solution to a crisis he has spent his career ignoring and exacerbating, a crisis his new boss says doesn’t exist. And with Tillerson at the helm of U.S. foreign policy—and Bush-era neocon John Bolton as his likely deputy—it could be time for antiwar protesters to dust off their “no more war for oil signs,” as the lines between federal and corporate resource exploration become even more blurred.

Although Trump told Fox News this weekend that “nobody really knows” if climate change is real, Exxon itself has known exactly that for some time. As reports from Inside Climate News have shown, Exxon conducted cutting-edge climate research starting in the 1970s, and is now being accused of having lied to the public over the existence of man-made warming. The company is under investigation by the Massachusetts and New York State Attorneys General.

ExxonMobil has also donated hundreds of thousands of dollars to climate-denying think tanks like the Heartland Institute, to which it gave $115,000 in 2006, when Tillerson took over as CEO. The company has given EPA transition head Myron Ebell’s Competitive Enterprise Institute, a libertarian, anti-environment think tank, at least $2.1 million since 1997.

It's ironic, then, that ExxonMobil in recent years has been more amenable to the idea of climate policy, at least on paper, than Trump himself. The company backed the Paris Agreement last month and supported—along with 5 fellow oil majors—the idea of a global carbon tax. Many suggested the company’s support for a price on carbon was a cynical move, meant to set the stage for a big legislative fight that would distract from more intrusive regulation. Though Tillerson acknowledges that burning fossil fuels contributes to rising temperatures, he downplays its effects, saying simply “We will adapt. … It’s an engineering problem and there will be an engineering solution.”

With Trump and Tillerson on their way to the Oval Office, however, it remains to be seen whether Exxon will continue backing climate action in any form. Tillerson may back down from his prior timid support for climate action—and in so doing could clash with the Department of Defense, which last year outlined warming as a grave threat to national security. (Trump’s nominee for Secretary of Defense will be one of the few in the cabinet who might support climate mitigation policy.)

Before he gets into the Executive Branch, however, Tillerson will have to undergo a Senate confirmation hearing. It’s there where climate groups plan to try and stop him. “We’re going to do everything we can to block this nomination,” 350.org’s Lindsay Meiman tells In These Times. “We plan to turn the confirmation process into a hearing around what Exxon knew about climate change, and Rex Tillerson’s role in that,” likely leaning on allies in the Senate like Bernie Sanders (D-VT), who has worked with 350.org on a number of occasions.

In recent months, the House Science committee subpoenaed 350.org and other climate organizations around their role in the Massachusetts and New York State Attorneys Generals’ investigations into the company, along with the AGs offices themselves. Exxon, too, has directly subpoenaed the group, which plans to not comply with orders to hand over internal communications and fundraising documents.

Tillerson’s appointment is still more disturbing given other news from the transition team this week. A questionnaire has been circulated around the Department of Energy asking department employees if they had dabbled in climate change issues, drawing obvious comparisons to McCarthy-era witch hunts. (The Department of Energy has said it won’t give this information.) And Oklahoma Attorney General Scott Pruitt was chosen to lead the EPA, likely because of his history of battling it in court. Pruitt has also defended Exxon and criticized the New York and Massachusetts Attorneys General for investigating the corporation. Former Texas Governor Rick Perry, who suggested 2010’s disastrous BP oil spill may have been an “act of god”, was tapped to head the Department of Energy.

The problem with Tillerson as Secretary of State with regards to climate is bigger than his friendship with Putin, or his personal beliefs on whether climate change is or isn’t happening: It’s that the fossil fuel industry cannot exist if the planet has any chance of a remotely stable future. And that industry is now poised to occupy what may be its most powerful position in world history. “The strategy we’ve seen from Exxon is intimidation, delay and deceit,” Meiman says. Should he get to the White House, Tillerson could imbue that strategy with the full authority of the United States government—and put everyone else in serious danger.