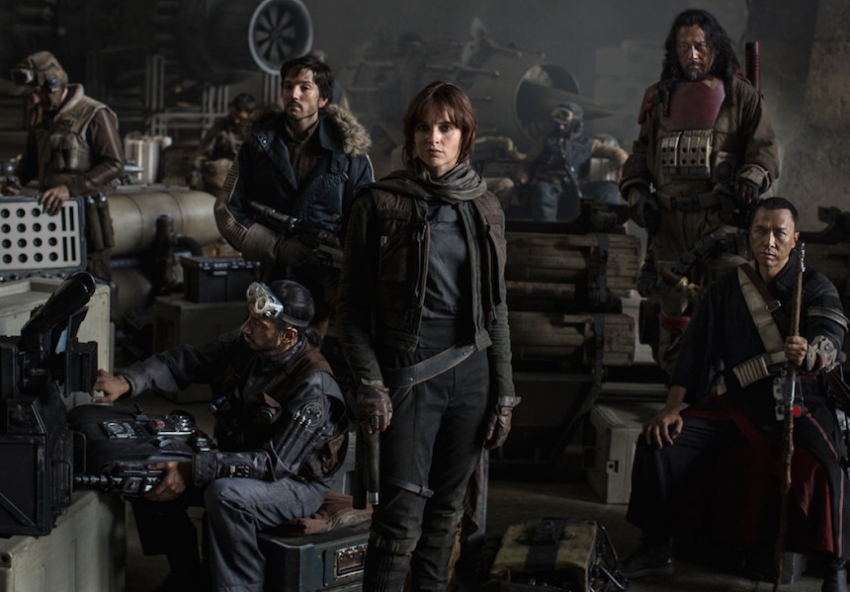 Rogue One is light on Jedis—its heroes are ordinary people fighting a totalitarian empire.

Rogue One May Be the Most Leftist Star Wars Film Yet

In the age of Trump, we need all the rogues we can get.

If the Left wants to write off Rogue One as politically barren so be it, but like most pop culture, its meaning will be made by the public, and by the forces best poised to take advantage of it.

This story is cross-posted at Jacobin.

If you’re conscious and over 17, you probably have pretty clear expectations for Rogue One: A Star Wars Story: a flashy, well-made and not terribly intricate action movie featuring a young hero with a tragic and/or mysterious past, a multitude of Easter eggs for die-hard fans, and—more than likely—some sort of nefarious infrastructure project.

Rogue One makes good on those expectations. The surprising thing is that this, the eighth film in the franchise, might be the most politically substantive yet.

Rebels without a pedigree

First, a disclaimer: Politics aside, as a lifelong Star Wars fan I am incapable of judging whether Rogue One is actually a good movie. A.O. Scott doesn't seem to think so. Like most of the theater, I was just excited to be along for the ride.

And as rides go, Rogue One doesn’t disappoint: Orphaned heroine Jyn Erso (Felicity Jones) falls in with the Rebel Alliance, visits a few planets, discovers an Important Secret Related To Her Past, and ends up leading a scrappy band of rebels in an against-the-odds mission to steal back the plans for the Death Star—which contain the secret to destroying it. As we all know, the moon-like space station/weapon of mass destruction can blow up whole planets with a single blast. Everything is loud and melodramatic and beautiful. Rogue One’s Evil Empire is the totalitarian state it has been throughout the series, although perhaps even more sadistic and Orwellian. As one Imperial officer states, the “planet killer” is meant to bring “peace and security to the galaxy.”

Despite the Empire’s Nazi overtones, the Star Wars franchise has always been infamously light on politics. Other space operas, like Star Trek’s more savvy installments (think Deep Space Nine and Next Generation) and the heavy-handed saga Battlestar Galactica, dive head-first into political allegory. Star Wars’ signature has always been a simpler good-vs.-evil narrative, with labels like Rebel and Empire serving as helpful signifiers for the Left, but plots universal enough to please audiences from most any political background. There’s a reason it’s the fourth-biggest film franchise of all time rather than a cult classic.

Rogue One is able to break from that—if only by degrees—because it’s the series’ first installment not to revolve around the superhuman Jedi or hallowed Skywalker lineage.

Instead, it features a new and—in 2016—very welcome kind of hero: the ordinary rebel. Neither Jyn nor male lead Cassian (Diego Luna) are Jedi, though both are plenty capable of cutting their way through dozens of stormtroopers. The only Jedi character, Chirrut Imwe (Donnie Yen), has relatively little screen time. As a Sith, Darth Vader is the only force user who gets to use a lightsaber. (Mind, there's a reason for the Jedi’s absence: They were already rare throughout the galaxy, and have at this point been hunted down and slaughtered courtesy of Palpatine, Vader and Order 66.)

Rogue One also corrects for the prequels’ strangely eugenicist idea that access to the force is based on hallowed bloodlines containing large concentrations of symbiotic intelligent microbes called “Midi-chlorians.” The film’s conception of the force is converted instead to its original form—an ancient religion that everyone can access with proper dedication, one embraced by the Rebels. Imwe is an ascetic figure, chanting “I am with the force and the force is with me” in times of peril. The planet Jedha, in fact, is a kind of holy land for force followers, albeit one under Imperial occupation, where rebel fighters are led through the streets in handcuffs.

One of Rogue One’s more fascinating characters is Galen Erso (Mads Mikkelsen), Jyn’s father, an architect who serves the Empire under duress. He agrees to build the Death Star, but plants its fatal flaw. When harangued about her father’s status as an “Imperial collaborator,” Jyn explains, “He built it because he knew they would do it without him.”

As Trump’s transition team appoints his own imperial stooges to various agencies, it’s hard to imagine mid-level bureaucrats—in places like the EPA or Department of Labor—won’t find themselves facing similar ethical qualms. Should they stay, and try to build their own kill switches into the regime’s plans? Prevent the worst from happening? Or resign in protest to join the resistance? The Department of Energy’s defiance this week, refusing to hand over the names of staff who work now or have ever worked on climate issues, could be a sign of dissent to come.

Still, if there is a real-world parallel to the battles waged in Rogue One and throughout the franchise, it’s not the anti-Trump resistance—it’s the Spanish Civil War. An autocratic strain from within the state has staged a sudden coup, rapidly claiming territory and institutions from a beleaguered and increasingly shallow democratic system through brute force. In its wake comes military rule, now being beaten back—gruelingly—by rebel forces that are vastly outgunned and outskilled. Because evil (and fascism especially) tends to rule through violence, the battles are relentlessly uphill.

Unlike Spain’s Popular Front, however, the Rebel Alliance is neither united around some shared goal nor even a vaguely progressive vision. Rather, it’s formed from the vestiges of the democratic government overrun by the Sith, now radicalized (somewhat) by the threat of evil authoritarianism. Its members include everyone from street kids to senators. To the chagrin of real-life sexists and white supremacists, Rogue One’s Rebellion is led by women and people of color.

Ditching both the prequels’ diplomatic jockeying and the Skywalkers' Messianic tendencies, Rogue One is more of a war movie than any other Star Wars installment, albeit a guerrilla war movie. In that, it’s also a film about collective struggle, placing personal quests and destinies in the backseat.

The kinds of heroes Rogue One showcases have been mostly nameless, both in real life and in the franchise. Rebel foot soldiers have so far been mostly lost to Galactic history, save for a few lines in A New Hope’s opening crawl. As that tells us, the events of the prequels were just “the first victory against the evil Galactic Empire” in a war that lasted more than two decades. Even at the end of Return of the Jedi,  the threat has not been stamped out entirely, and the Sith rear their head again in The Force Awakens, the latest in the chronology thus far. The credits of Rogue One offer no easy endings for its heroes—simply an arduous fight ahead. The only reason Rogue One is a hopeful blockbuster is because we already know how it ends.

The political uses of pop culture

The United States’ own budding rebellion doesn’t have the same luxury. Though it’s no perfect parallel to either Spain in 1936 or a Galaxy Far Far Away, today’s heroes are similar: defectors, whistle-blowers and—above all—ordinary rebels. The trouble is that America’s Galactic Empire is better organized than its enemies, and holds a hell of a lot more power, with the Right now commanding Congress, the Executive Branch, 67 of 98 state legislative chambers and growing army of hate groups.

The latter don’t seem to like Rogue One much at all. In a string of anti-Trump missives post-election, Rogue One writer Chris Weitz tweeted that “The Galactic Empire is a white supremacist … organization.” After a flood of online attacks and boycott threats (#DumpStarWars) from real-live white supremacists—in response to Weitz and the film’s diverse cast—Disney’s chief replied, declaring (of course) that Rogue One “is not a film that is, in any way, a political film.”

Yet even more politically brazen blockbusters (think Catching Fire) are usually oblique enough not to offend either end of the political spectrum.

That doesn’t mean the Left should write them off. Millions of people will see Star Wars this weekend. Millions more will see it—maybe for a second or third time—with family and friends over the holidays. Why? Because people fucking love Star Wars. If the Left wants to write it off as politically barren so be it, but like most pop culture, its meaning will be made by the public, and by the forces best poised to take advantage of it.

Right now, the far-right is the side engaging with Stars Wars, although perhaps not with much strategy. Oddly, the same band of neo-Nazis who are boycotting the film because of its casting choices are actively identifying with the Sith and stormtroopers (an army that, ironically, was cloned from the character Jango Fett, played by an actor partially of Māori decent, Temuera Morrison.) Steve Bannon has even likened himself to Darth Vader.

The far-right’s Stormtrooper fixation might be turned to the Left’s advantage, by bringing the so-called “alt-right” out of its caves on Breitbart and the Daily Stormer and into the court of ordinary Americans' public opinion. The moral lines of Star Wars’ Empire-vs.-Rebel battle are nearly 40 years old, and public opinion falls clearly on one side. If Trump’s acolytes want to start favoring Imperial soldiers over Pepe, on their heads be it.

But neo-fascists aren’t the only ones who can reappropriate popular symbols and stories. The Rebellion needs all the members it can get, and seeing pop culture as a field of struggle could bear fruit. Tired leftist identifiers like “activist” and “protester” remain cloistered, mired by counter-cultural associations that could be alienating many possible recruits. Joining the ranks of the Rebellion with Jyn and Cassian could have a better ring. The issue here, of course, isn’t about fighting a turf war with neo-Nazis over Disney characters, or whether to take up the Rebellion title outright. It’s about communicating with ordinary Americans (the would-be Rebels) in terms that are as accessible as they are appealing, along with making clear that there are no Jedi powers—no high-level analysis or background in critical theory—required to help stop the creep of autocracy.

In the age of Trump, a good-vs.-evil narrative is, unfortunately, more appropriate than ever. The Rebellion is good and the Empire is evil. Building a force big enough to actually stop Trump entails making that clear. Debating whether to attack an Empire that possesses a Death Star, one of the film’s Rebel leaders asks, “If the Empire has this kind of power, what chance do we have?” To paraphrase Jyn's answer, the question isn’t what chance the Left has of winning over the public, but what choice?