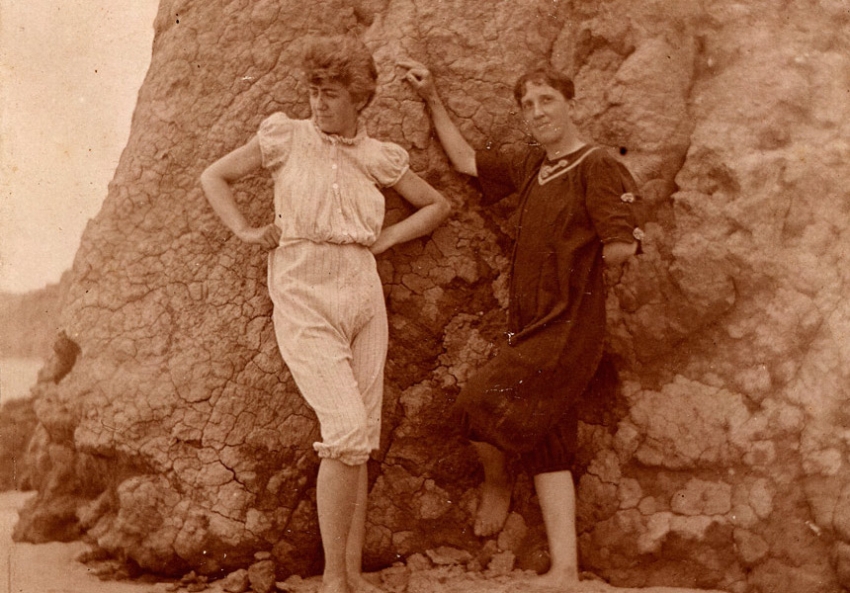 The new book Rebel Crossings showcases a small band of feminist utopians who came to America to try something new.

They promoted the “progressive” issues of the day, from wearing sandals and “bloomers” for women, to vegetarianism and sea bathing.

About 40 years ago I decided to study examples of utopian writing and some real-life attempts to create utopias. I read Edward Bellamy’s Looking Backward, Samuel Johnson’s Rasselas, William Morris’ News From Nowhere, and some of the dystopias, like Yevgeny Zamyatin’s We. I read about dozens of experiments, in your country as well as mine, in which a charismatic man (as a rule) would lead his band of followers into some version of the wild to live his version of the good life. He usually got tired of it after two years or so and left or was ousted. And I, too, gave up on the utopian fantasies and the experiments, cast down by the quarrels and the disagreements that made these initially heartening experiments seem too like our own less ambitious lives.

Sheila Rowbotham, a socialist feminist historian, is more stalwart than I. She has made fruitful use of a galaxy of optimisms. If “the personal is political” was not actually coined by her, it’s certainly a mantra she’s listened to. In her latest monumental work of research, Rebel Crossings: New Women, Free Lovers and Radicals in Britain and the United States, she follows the lives and loves and the endlessly mutating politics and enthusiasms of four women and two men who sought a utopian way of life. Five of them hailed from Bristol, England, and later—in and after 1890—moved to Boston and from there to California. In England, most of them had been involved in varieties of socialism and anarchism, and particularly in debates about how women should achieve a semblance of equality with men.

They left England for the United States, exhausted by opposition to their ideas, particularly to those encouraging free love and open marriages; and as they went they assured themselves that America would offer “a wider sphere of usefulness.” They went like missionaries and may have been thought of as somewhat patronising colonists, and they found it hard. Some Americans welcomed these high-minded folk from England, but their small settlements out West drew few recruits. There was a general feeling that they were “unfitted to meet the world.” And they were. They were shocked and disabled by the sheer physical difficulties, and at least one of the settlements burned to the ground.

In Boston they’d been joined by Helen Tufts, the daughter of impoverished Brahmins, who began by finding these “unfamiliar doctrines” confusing but eventually became their acolyte and archivist, though she never entirely abandoned her early snobberies and racism (but, then, nor did the others).

None of the six is famous, though they were all, in different ways, inspired by well-known figures of the late 19th century, most especially Walt Whitman, Edward Carpenter, Patrick Geddes and Havelock Ellis. Collectively, but also separately, Rowbotham’s six stood for and promoted the “progressive” issues of the day, from wearing sandals and “bloomers” for women, to vegetarianism, sea bathing and the practice of arts and crafts for their therapeutic and expressive value. They supported homosexuality in a gingerly way, and they tried to practise what they preached about sexual openness. They sometimes lived together as threesomes or quartets and they did so on very little money. When two of the most interesting of them, Miriam Daniell and Helena Born, died in their thirties, their two women friends moved in with their widowed male partners. There seems to have been a high incidence of neglected children, who later turned their backs on their parents’ way of life.

Rowbotham is good at details that illuminate her characters: the antipathy that Miriam’s self-assurance could arouse, for instance, and Helena’s “great weight of contained anger” despite her reputation for calm practicality and consistency. In the end, though, perhaps because of age, perhaps because they were living in America, the remaining four moved from bettering society to concentrating on individual freedoms and on spiritual values not so different from the religious ones they’d so wanted to escape, and the “love” they invoked as vital to all aspects of their lives soured, especially in their intimate relations with one another. But then this hardly seems the moment to suggest that political idealism of any sort is easy to maintain.