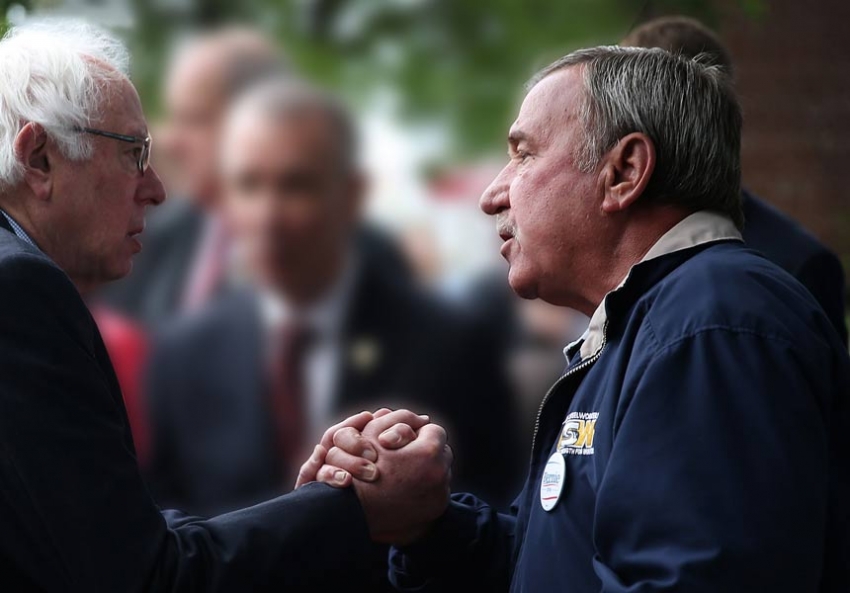 Chuck Jones (right) shakes hands with Bernie Sanders in Indianapolis on May 3, 2016, the day of Indiana’s primary. (Joe Raedle/Getty Images)

Attacked by Trump and Ignored by Democrats: Chuck Jones on Labor’s Fight

The local labor leader discusses Carrier, outsourcing and being targeted by the president-elect on Twitter.

The Democratic Party, and Hillary in particular, didn’t speak about the working class. They forgot about us. That troubled a lot of people.

2016 was a rough year for Chuck Jones. In February, the president of Indiana’s United Steelworkers Local 1999 learned that 1,350 of his members were going to be laid off from the Indianapolis-based Carrier plant. Carrier was moving its operations to Mexico in search of higher profits, even though its parent company, United Technologies, made $15 billion in 2015.

A video of the workers reacting angrily to the news went viral, and both Bernie Sanders and Donald Trump used the event on the campaign trail to illustrate the plight of U.S. workers and rail against the free-trade deals that both candidates said were to blame for Carrier’s cavalier outsourcing.

In December 2016, Trump appeared to be making good when he announced he had saved 1,100 jobs at Carrier. In fact, he had helped negotiate a $7 million incentives package that convinced the company to keep about 800 of the 1,350 jobs in Indianapolis—leaving about 550 still headed for Mexico. But Trump glossed over this in his public statements, while apparently counting hundreds of engineering jobs that were never slated to leave in his public tally.

This didn’t sit well with Jones. In an interview with the Washington Post, he said Trump had “lied his ass off.” In a CNN interview, Jones, who has the gravelly voice of a smoker and is missing a near-front tooth, said about Trump, “You made a promise to keep all these jobs. You halfway delivered.”

It didn’t take long for Trump to hit back via his favorite medium of communication: “Chuck Jones … has done a terrible job representing workers. No wonder companies flee country!” Trump tweeted on Dec. 7, 2016.

Immediately, Jones started receiving threats via e-mail, social media and calls to the union local and his personal cell phone. Jones told the Post that some callers made reference to his children and asked the make of his car.

But Jones says he isn’t scared of Trump and his rabid Twitter followers. In an interview with In These Times, he discussed the effects of plant closures on working-class communities and what the Carrier saga says about the future of the Democratic Party.

You have the distinct honor of being the first U.S. union leader to be attacked by the president-elect on Twitter. How does it feel?

I didn’t expect it. The Post didn’t misquote me by any means—I said some pretty harsh things about Trump.

Right afterwards, I got a call from a friend: “Hey, Trump’s hammering you on Twitter.” And I started laughing. But then my phone started going wild.

Have things calmed down for you and the local?

For the most part. We’re still getting a few calls and e-mails and letters—you got your wackos out there. But overall, I would say we’ve actually gotten a very positive response in support of the position we took.

At one point, we had three secretaries answering the phone, and we were trying to keep a tally. Eventually we started losing track. I’d say 10-to-1 positive overall, though. We got a few threats, but that’s to be expected, I guess.

I’ve been doing this job for 30 years. So when he said I’m not good at my job—that doesn’t bother me. I know what I’ve done in the labor movement for the last 30 years.

Does it worry you that this could be the new normal under Trump—anyone who challenges him will get his Twitter hordes sicced on them?

I was really surprised that he reacted the way he did. When Obama was elected, my God, all the stuff people were saying about him, but he didn’t react. But Trump does. He never, ever said I was wrong on my numbers. The only thing he wanted to do was personally assault me.

Anybody’s gotta be concerned about attacks. But if somebody feels like the president has said something wrong, they oughta speak up. He’s probably trying to prevent that from happening by attacking me.

How have your members reacted to Trump’s intervention at Carrier? Do they buy his line that Mexicans are “taking our manufacturing jobs”?

When Trump and Pence came here in December, they toured the plant and had a whole dog and pony show. Trump kept talking about Carrier “manufacturing air conditioners,” but we don’t make air conditioners here—we make furnaces. They watched people making furnaces, then said, “These air conditioners will remain here, and this plant will produce more air conditioners than it ever has in the past.” That was a bad sign.

Those who are getting their jobs saved are very grateful. There are others who said, “He’s a phony.”

Some people are blaming the Mexican workers. And I’m saying, “Hey, it’s not Mexican workers we’ve got an issue with. They’re being exploited, too, they’re not making out on the deal. The corporations are.”

Trade became a huge issue during the campaign, with Trump repeatedly attacking Clinton’s past support for freetrade deals. Do you think this undermined her support among workers like those at Carrier?

People didn’t trust Clinton. She supported NAFTA; she was for the TransPacific Partnership, but when she decided to run for president and needed labor’s support, she was against it. I voted for Clinton because I thought she was the better of the two evils. But we heard very little from her.

We had invited Hillary to our rally at the state house. Through her people, she accepted. But then a couple weeks later, her people said she had a “scheduling conflict.” The truth was, she wasn’t going to come to that rally when we were talking about jobs going to Mexico because of NAFTA. She probably thought she would’ve been eaten alive [at the rally]—and she was right.

The Democratic Party, and Hillary in particular, didn’t speak about the working class. They forgot about us. That troubled a lot of people.

Following Clinton’s loss, many are arguing that the more populist wing of the Democratic Party, represented by people like Bernie Sanders, Elizabeth Warren and Keith Ellison, should take control. What did your members think about Sanders?

We supported Bernie in the primary, then in the general we stayed out of it. He spoke at our rally at the state house and supported our movement. He was quite vocal. His message in favor of working people hasn’t changed in 20 years.

Trump picked that up and ran with it. And it resonated. He was talking about Carrier and a lot of other companies leaving the country.

Carrier isn’t the only Indianapolis plant facing outsourcing. What’s going on with workers at Rexnord?

I’m actually from that plant. I got a job there in 1969. They manufacture bearings for agricultural heavy machinery and basically anything that’s got a shaft. They’re one of the foremost bearing manufacturers in this country. They’re very profitable. But once again, corporate greed: According to their figures, they’re saving $15.5 million a year by moving to Mexico. Carrier is saving $65 million.

It’s not that either of them couldn’t compete. Both were very profitable. We can compete on every level, but we can’t compete with $3-an-hour wages in Mexico.

Why do you think that focus on trade and outsourcing resonated so strongly?

I’ve been through probably eight to 10 plant closures, and I know what it does to people’s families and communities. The average wage at Carrier was $23 an hour, $25 at Rexnord [another Indianapolis plant where hundreds of workers are still slated to lose their jobs]. These folks aren’t going to find jobs that will come anywhere close to that. Some people will have to work two jobs at minimum wage to make even half of that. And they’ll be saying, “Do you want fries with that?”

In your estimation, what needs to change?

Bernie Sanders has introduced some legislation that says that if companies like Carrier, which have, say, military contracts, move overseas, they would lose their contracts. And if they did move, there would be tariffs imposed on the goods brought back into the country. The chance of this bill passing is nil, because of the makeup of the people in Congress—they’re not going to let this bill go through.

But we’re still fighting the fight. If we can keep the limelight on it, maybe we can generate enough pressure to show the American people that this isn’t fair and it can’t continue.

I wish I could answer that one. I really don’t know. A lot of times, political people, you get a feel for what their positions are. For Trump, it depends on what day it is.