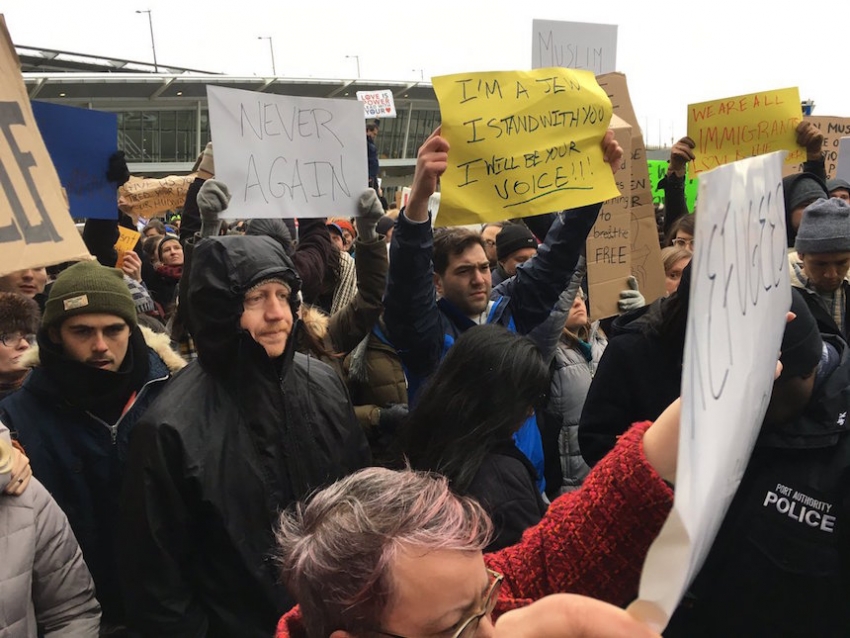 Interviews for the Resistance: Live From the Spontaneous Protests at JFK Airport

Hundreds gather to protest Donald Trump’s refugee and Muslim bans, and to demand the release of those held at the airport.

Amazing people are showing up and just making their signs on the spot to say that they're going to resist, to say no Muslim ban, to say they stand with refugees.

Welcome to Interviews for Resistance. In this series, we'll be talking with organizers, troublemakers, and thinkers who are working both to challenge the Trump administration and the circumstances that created it. It can be easy to despair, to feel like trends toward inequality are impossible to stop, to give in to fear over increased racist, sexist, and xenophobic violence. But around the country, people are doing the hard work of fighting back and coming together to plan for what comes next. This series will introduce you to some of them.

As Donald Trump's executive order banning refugees and immigrants from several Muslim countries took effect, refugees already on their way to the U.S. were stuck in limbo, some of them in the airport. In New York, an emergency rally was called at John F. Kennedy Airport to demand they be freed. Daniel Altschuler, director of civic engagement and research at Make The Road New York, spoke with me from the rally Saturday afternoon.

Sarah Jaffe: Where are you right now?

Daniel Altschuler: I'm at JFK Terminal 4, where hundreds of people—and growing every minute—are here to denounce the unconscionable and unconstitutional executive orders that Donald Trump signed yesterday and that are now tearing families apart. Here at JFK Airport, we know of at least 12 people who were detained overnight. One is now free, and everyone's here to cheer the fight for the remaining refugees who have been detained here at JFK.

Sarah: I can hear chants in the background. Donald Trump had been threatening to ban refugees from the beginning—can you tell us about the preparation that went into place to be able to respond to this?

There were amazing lawyers who were here monitoring the airports, to see what was going to happen and if people were going to be held. Unfortunately, folks' worst fears came true. An amazing, informal coalition of organizations and people heard what was happening, were horrified, and decided to show up at the airport.

This is one of these beautiful organic movement moments where people show up for other people's rights and for all of our rights.

Sarah: Can you tell us about the one person who was released?

Daniel: Mr. Darweesh was someone who worked the U.S. military—I believe as a translator, folks can look at the New York Times article for greater detail about his case. When Congress members [Nydia] Velazquez and [Jerrold] Nadler [D-N.Y.] arrived [at the airport] they went in immediately and demanded to speak to Customs and Border Patrol, and were able to speak to them, and after some negotiation were able to get him free.

He came out, he was very relieved, he was very appreciative of the folks that were here, and then he went to be with his family. He had been separated from his family since arriving here yesterday in the late afternoon.

Sarah: There were several calls for rallies earlier today and one for 6p.m. tonight. Is the plan to stay there as long as necessary?

Daniel: This crowd is going to be here for many hours. There's tremendous enthusiasm here. There's a vigil that's called for 6p.m., there's been constant chanting—amazing people are showing up and just making their signs on the spot to say that they're going to resist, to say no Muslim ban, to say they stand with refugees. This is not one of those times where there's a designated beginning point and endpoint. This is a moment where people are here to fight for what they know that this country can be, which is a place that welcomes refugees, that welcomes Muslims, that does not impose religious discrimination. So folks are excited to be here.

Sarah: Obviously some of the executive orders that came out this week also have to do with immigrants from Mexico and Latin America, are there similar rapid response plans for deportation back to that part of the world?

Daniel: Absolutely. And there are immigrants here at this rally right now, because folks are saying we stand together. So yes, immigrant rights organizations like ours are preparing for what happens now that Donald Trump has further empowered and is going to continue further empowering an out-of-control and rogue Immigration and Customs Enforcement and border apparatus. Absolutely defending families is going to be at the core of that.

Sarah: What can people do if they are watching or listening from somewhere that is not within easy getting-to-JFK-Airport distance? Are there other actions that you know of?

Daniel: I honestly have been so ensconced in this action that I'm not sure what else is going on. I wouldn't be surprised. I'd expect there's solidarity actions and people should look. You can get on social media, on Facebook and Twitter and engage there as well. I think folks most importantly should call their members of Congress and denounce the measures that have been taken this week against immigrants, refugees, and Muslims and tell them that they insist that these refugees be freed and that these executive actions be rescinded.

Sarah: And how can people keep up with you and Make the Road New York?

Saniel: You can find us on Facebook at Make the Road New York, and our Twitter handle is @MakeTheRoadNY.

Interviews for Resistance is a project of Sarah Jaffe, with assistance from Laura Feuillebois and support from the Nation Institute. It is also available as a podcast.