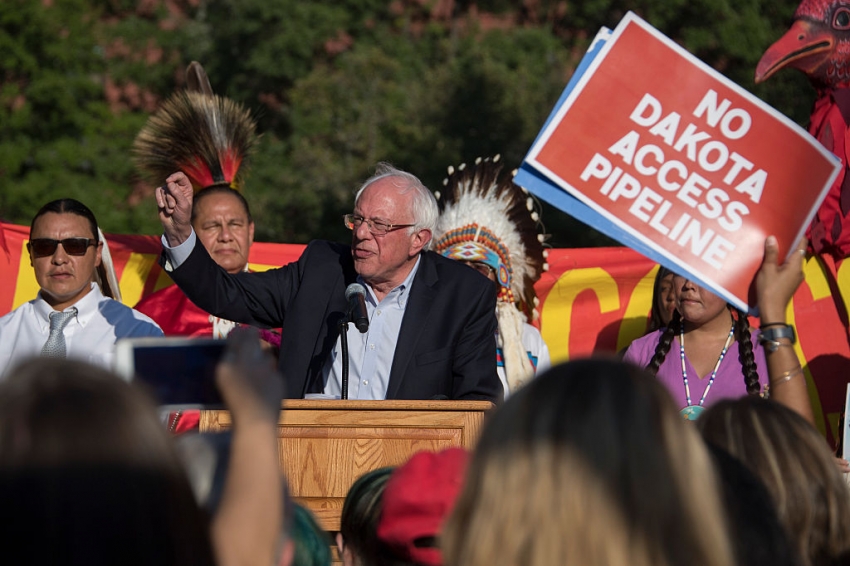 Sanders was among the first Congressmen to come out against the Keystone XL and Dakota Access pipelines. (JIM WATSON/AFP/Getty Images)

Big Greens Are Mad at Bernie For All the Wrong Reasons

Sanders’ low ranking by the League of Conservation Voters speaks to a deeper divide among greens.

"If splits within the Democratic Party were apparent in the platform drafting process, they’re all but unavoidable now."

Reading through the League of Conservation Voters’ (LCV) most recent scorecard of U.S. lawmakers might leave you with a strange impression: That coal-loving Joe Manchin, a Democrat from West Virginia, and Dakota Access Pipeline backer Heidi Heitkamp, a Democrat from North Dakota, are bigger environmental champions than Bernie Sanders. Neither Manchin or Heitkemp received especially high rankings—47 and 53 out of 100, respectively—but their scores trounce Sanders’ score, which was just 6 percent.

In part, the scores are a result of the rigidity of LCV’s methodology. Lawmakers’ ratings are tallied based on how they vote on a series of key Congressional votes on different subjects, including energy, climate and spending for environmental programs. Absences count against them, so the fact that Sanders missed several votes while on the campaign trail weighed him down more than Manchin’s and Heitkamp’s decisions to side with the fossil fuel industry on various measures.

For the LCV, it may be time to look to a more holistic way of evaluating environmental leaders. In late January, Heitkamp said that Donald Trump’s decision to greenlight the Dakota Access pipeline, “provides a step forward that is needed for those impacted by the long delays around the Dakota Access pipeline. For too long, inaction or indecision paved the way even after the courts already stated twice that the Corps followed the required process in considering the permit.” She has also taken in nearly $400,000 from oil, gas and utility companies.

Manchin, meanwhile, holds notoriously close ties to the coal industry, and has voted reliably to curb the Environment Protection Agency’s (EPA) ability to regulate emissions and extraction., He recently stood behind Trump—physically and politically—in dismantling Obama-era regulations that prevented coal companies from dumping their waste in streams. Both Manchin and Heitkamp voted for Trump’s EPA pick, Scott Pruitt, who has sued the agency 14 times.

By contrast, Sanders joined a number of Democrats, in November 2015, in introducing the “Keep It in The Ground Act,” which would have banned corporations from taking out new leases for extractive projects on federal land and in the Pacific and Gulf of Mexico, and halted offshore drilling in the Arctic and Atlantic Oceans. Sanders was among the first Congressmen to come out against the Keystone XL and Dakota Access pipelines. He also consulted closely with pipeline fighters and groups like 350.org while on the campaign trail, and picked one of the group’s co-founders—writer Bill McKibben—to serve on the Democratic Party platform drafting committee. This morning, he hosted a Facebook live conversation with Bill Nye about science, climate change and transitioning off fossil fuels.

Noting his history of support for climate and environmental issues, the Sierra Club issued a response to Sanders’ single-digit score. “[T]here is no question where Senator Sanders stands,” the group’s executive director, Michael Brune, wrote, “he is one of the strongest voices for environmental protection, clean energy, and climate action not just in the United States Senate, but in the country.” Friends of the Earth penned a similar statement, calling Sanders “our biggest champion pushing for action on the biggest stage.”

But Sanders’ low ranking speaks to a deeper divide among greens. The chair of the LCV board, Carol Browner, a former head of the EPA and Hillary Clinton supporter, sparred with Sanders surrogates in drafting the Democratic Party’s platform. Clinton clashed with McKibben and the Vermont senator's other picks, and her team uniformly voted down bans on fracking and fossil fuel extraction on federal land, along with another to ensure federal agencies factor climate impacts into their planning and decision-making. Following compromises on both sides, the platform committee landed on a “unity amendment,” officially adopting an Obama-era preference for renewable energy over natural gas.

If splits within the Democratic Party were apparent in the platform drafting process, they’re all but unavoidable now. It was the same fight that played out in the Democratic Party leadership race, between Keith Ellison and the party’s establishment. And strains of it are coursing through the environmental movement itself. Greens and Democrats alike now face a choice: whether to stand with Trump and the people who collaborate with him or with the progressives capable of mounting the resistance.