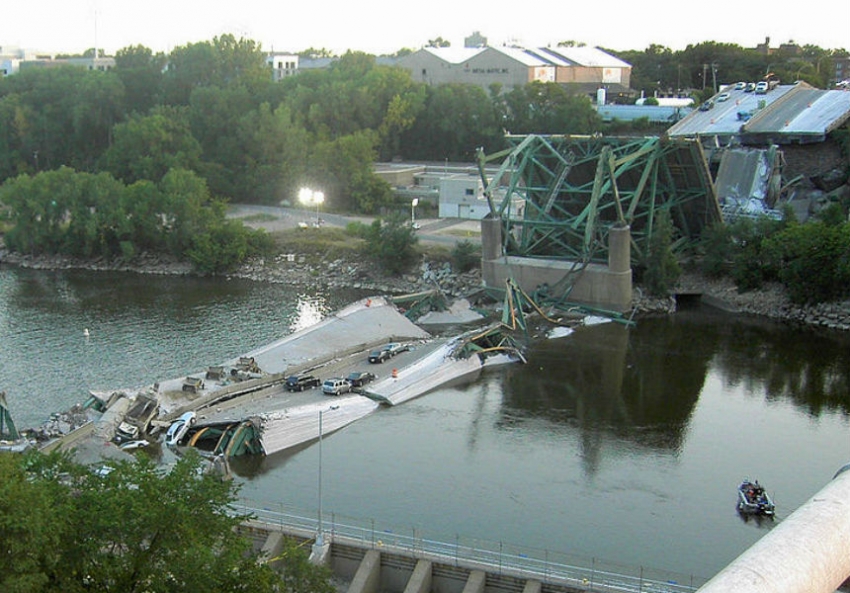 The 2007 I-35 bridge collapse in Minnesota shows we need an infrastructure upgrade—but there are right ways and wrong ways to take action. (Koldark / Flickr)

A Better Way To Fund Infrastructure

Trump’s investor-friendly plan and other conventional approaches are likely to fail—it’s time to try something new.

The other approach would be for the Treasury, Federal Reserve or Congress to create the money and just directly invest it in infrastructure projects.

In their 2017 infrastructure report card, the American Society of Civil Engineers (ASCE) gave the United States a dismal D+—and for good reason. ASCE notes, for instance, that each day 188 million trips are made across the nation’s 56,007 structurally deficient bridges. Another catastrophe like the 2007 collapse of the I-35 bridge in Minneapolis (which killed 13 people and injured 145) seems only a matter of time. In fact, just this past week an elevated section of I-85 collapsed in Atlanta after a fire. A recent state inspection had found numerous cracks and spalling (concrete deterioration) in the structure.

Beyond the visibly decaying bridges, dams and railroads, various hidden issues also plague the country. The people of Flint, Mich., are still without clean, safe drinking water nearly three years after state emergency managers switched the city’s water source to the Flint River. The highly polluted river water was treated with high levels of chlorine, making it around 19 times more corrosive than the previous supply from Lake Huron, causing aging pipes to leach iron and lead into people’s water. Across the country, deteriorating infrastructure—including poorly designed or maintained roads, railroads that don’t use the latest available track technology, and pipelines that leak and explode—is responsible for thousands of deaths, injuries and illnesses every year, to say nothing of tens of billions of dollars in economic costs.

Clearly, America’s infrastructure is in desperate need of repair and modernization. But there are right and wrong ways to take action.

On the campaign trail, and in his February address to Congress, President Donald Trump promised a $1 trillion infrastructure plan that would create jobs and “rebuild” the country. In January, labor leaders from several building and construction unions met with Trump at the White House and affirmed their support for such a program. On the surface, this may seem like a bright spot in the Trump policy agenda—but the plan appears seriously flawed.

As Sean McGarvey, president of North America’s Building Trades Unions, confirmed after the meeting, the administration’s approach to infrastructure involves substantial private sector investment and so-called “public-private partnerships” (PPPs). Once considered an innovative and novel way to finance infrastructure, PPPs have lost their appeal to many experts and policymakers amidst high-profile bankruptcies, extortionary contracts, and spiraling fees, tolls, and rate increases for users. Just last year, the private operator of parts of State Highway 130 in Texas declared bankruptcy. This follows on the heels of the 2014 bankruptcy of the company running the Indiana Toll Road (once considered the country’s marquee PPP project) and similar failures in California, Virginia and South Carolina.

There’s a reason PPPs are a risky, costly bet. In a recently released policy brief for the Next System Project, Ellen Brown (president emeritus of the Public Banking Institute and former Green Party candidate for California Treasurer) explains that one of the problems with private-sector approaches is that the investor (often a large financial corporation) requires a considerable rate of return on its investment to pay off its debt and turn a healthy profit. (Full disclosure: I am director of research at the Democracy Collaborative, where Ellen Brown is a fellow, and which hosts the Next System Project.) This return is generated on the back of higher user fees and rates, subsidies and guarantees from governments, and contractual restrictions on competition.

The traditional alternative of financing infrastructure involves state or local governments issuing bonds to be bought by investors and paid off over time. However, this isn’t ideal either—paying off interest on the bonds can sometimes as much as double the cost of a project. According to Brown, there’s a much better way: The federal government can finance infrastructure by simply issuing new money.

There are at least two ways to go about this. In one, the Federal Reserve would create money just as it did through its post-financial crisis “quantitative easing” (QE) program, when trillions in new money was pumped into the financial system through the purchase of securities from banks. These funds could then capitalize a national infrastructure bank or a network of state-level infrastructure banks. She calls this “qualitative easing,” because the money would be injected into the real economy rather than into the balance sheets of the major Wall Street banks.

The other approach would be for the Treasury, Federal Reserve or Congress to create the money and just directly invest it in infrastructure projects. Whether funneled through a public bank or banks, or invested directly, the funds could be provided at no or very low interest, allowing states and localities to pursue a host of pressing infrastructure projects without levying or raising taxes, tolls and user fees.This isn’t so radical as it sounds: As president, Abraham Lincoln printed $450 million (almost $11 billion in today's dollars) in “Greenbacks” to help pay for the Civil War, and even Milton Friedman proposed “helicopter money”—a metaphor for “dropping” newly printed money directly into communities—as a way to combat deflation.

Critics will, of course, scream “hyperinflation” and conjure up images of wheelbarrows full of money in Weimar Germany or last decade’s worthless Zimbabwean bank notes. But Brown has a different take. Neither QE (despite the dire predictions of many in the economics profession) nor Lincoln’s Civil War money-printing caused hyperinflation. Given the persistence of relatively low inflation (as well as other factors) there is good reason to believe that in the current economic climate, investing new money into the real economy through infrastructure projects would merely provide a much-needed boost.

While Brown’s proposal may seem outside the mainstream of contemporary U.S. political discourse, it is exactly what is being proposed by major economic figures and politicians in Europe, ranging from Yanis Varoufakis, the leftist former finance minister of Greece, to Rick Rieder, the Global Chief Investment Officer of BlackRock, the world’s largest investment management corporation.

A large-scale commitment to rebuilding America’s decaying infrastructure is long overdue. A smart infrastructure policy could directly and indirectly create between 10 and 15 million jobs over the next decade, including good-paying union jobs in some states. It would benefit the economy: Alleviating traffic jams and improving public transit could work wonders for productivity. It would also save people’s lives and keep them healthy, and keep the country competitive with others that already are actively and energetically upgrading their infrastructure.