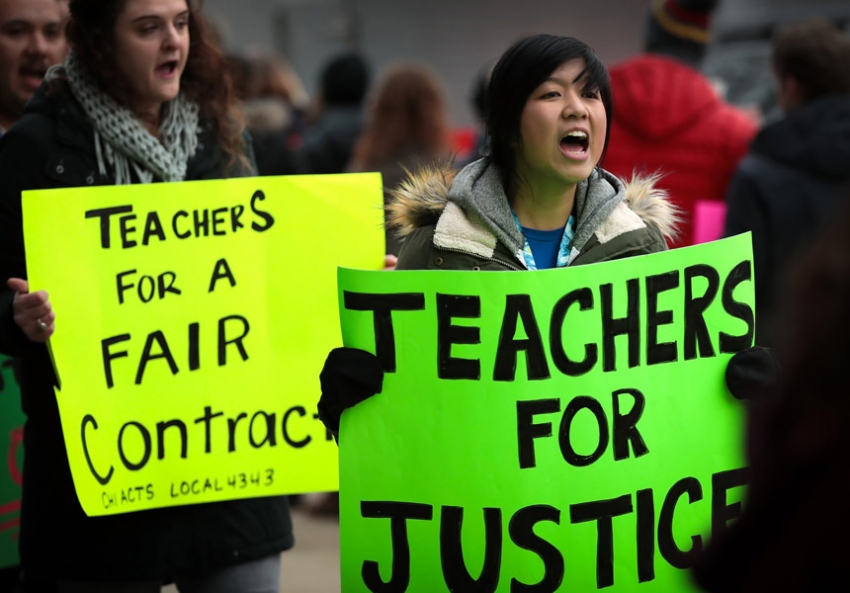 Unionized teachers can help keep charter administrations accountable to their workers—and to students.

"The only accountability charters have is when we form unions in them."

On March 3, the Chicago Association of Charter Teachers and Staff (ACTS) announced an organizing drive at the Noble Network of Charter Schools, which has 18 campuses across Chicago, including Rauner College Prep. If the campaign is successful, Noble will become the nation’s largest unionized charter network. The addition of Noble’s 800 teachers and staff to its ranks would also give ACTS, a local of the American Federation of Teachers (AFT), an impressive density in Chicago’s charter market—the union says it would represent as many as 40 percent of charter teachers in Chicago. About 10 percent of charter teachers nationwide are unionized, according to the pro-charter Center for Education Reform.

The Chicago Teachers Union, a sister local to ACTS, has been a bright spot in a bleak labor landscape. But traditional public school educators aren’t the only ones on the move. Chicago is also at the epicenter of a nationwide push to unionize charter schools. The AFT says it now has 7,000 members across charter schools in 15 states such as New York and California, where large organizing drives are also gaining stream. More than 1,000 of the union’s charter members are in Chicago.

ACTS hopes to increase charter teachers’ pay and benefits (according to data obtained by Catalyst, a Chicago education publication, full-time Noble teachers make about $60,000 a year including bonuses and stipends; CPS teachers make $74,000), increase teacher retention and wrest control away from “unaccountable” charter management. In doing so, the union may eliminate corporate reformers’ incentives for pushing charters in the first place.

The growth of charter schools during the past decade has gone hand-in-hand with the dismantling of public education. In the 2015–16 school year, nearly 3 million students—up 250,000 from the prior year—attended more than 6,800 charters across 42 states, according to the pro-charter National Alliance for Public Charter Schools. In Chicago, charters have spread rapidly at the same time traditional public schools have been shuttered. The city infamously closed 49 schools in one fell swoop in 2013 and closed about 100 in the decade before that. At the same time, new charter schools have continued to open, totaling 130 today. The schools are privately run but operate almost entirely on public dollars.

Charter boosters say the model provides school administrators the freedom to innovate. In a statement responding to the Noble union drive, Superintendent Michael Milkie said that the charter network would “respect the rights of individuals to organize or not organize.” However, he warned that “a restrictive union contract could eliminate the curriculum and flexibility we have to best serve our students’ needs.”

Charter critics, meanwhile, say that this so-called flexibility stems from the absence of worker protections. Unionized teachers, like all union workers, negotiate the terms of their employment; non-union teachers work at the whim of their employers.” Likewise, while “accountability” is a watchword for charter operators who say that they aren’t beholden to anything other than student outcomes, ACTS President Chris Baehrend says this couldn’t be further from the truth.

“The only accountability charters have is when we form unions in them,” says Baehrend. Before then, “you find it was a whole bunch of crony family members and friends” in leadership positions or receiving contracts at charters.

A prime example is Chicago’s large and influential UNO Charter School Network, whose 16 schools serve more than 8,000 students. Before opening its first charter in 1998, UNO’s roots were in Saul Alinsky-style organizing in the city’s Latino neighborhoods, and the organization quickly positioned itself as a power player in Chicago politics. But a series of investigations by Chicago Sun-Times reporter Dan Mihalopoulos in February 2013 found that UNO had engaged in major ethics violations, including handing out large contracts for services to family members of the network’s higher-ups. After several government investigations, millions in public funding were pulled from the network, and UNO CEO Juan Rangel was forced to step down in disgrace.

Up against the ropes, UNO leadership proposed a neutrality agreement, and teachers quickly unionized. Several other leaders were forced to resign, and the school cleaned up some of its most egregious practices.

Likewise, teachers at the ASPIRA charter network, who joined Chicago ACTS in 2010, say that one of their biggest contentions with management was basic budget transparency.

“ASPIRA has been deteriorating for the last five years,” says Marines Martinez, a teacher at ASPIRA and acting head of the union’s council of educators, citing a lack of basic maintenance in classrooms. “That left us to wonder: Where is the money going?”

Baehrend says the union helps ensure that more charter resources go to classrooms, rather than administration. Exact figures on just how much administrators earn are difficult to come by. While the City of Chicago releases names and salaries for all other city employees, including teachers, it does not do so for charter teachers, and most charter networks refuse to provide them.

To achieve its aims, Chicago ACTS has not shied away from workplace militancy. In the last six months, the union has threatened to strike three times when contract negotiations reached a standstill. While all three strikes were ultimately averted, that’s still quite a change from 2012 when, days before the Chicago Teachers Union strike, then-UNO CEO Juan Rangel bragged about his school staying open while public schools shut down. The rapid turn in Rangel’s fortunes, just four years later, probably provided a bit of schauden-freude for teacher unionists. But more importantly, charter organizing and ACTS’ willingness to strike mean that charter teachers cannot be pitted against their counterparts in traditional public schools.

“[We want] a future in which every charter school in Chicago is unionized,” says Baehrend. “That’s a win for both of our locals. No longer will charters be used to undercut the labor of CTU members.”