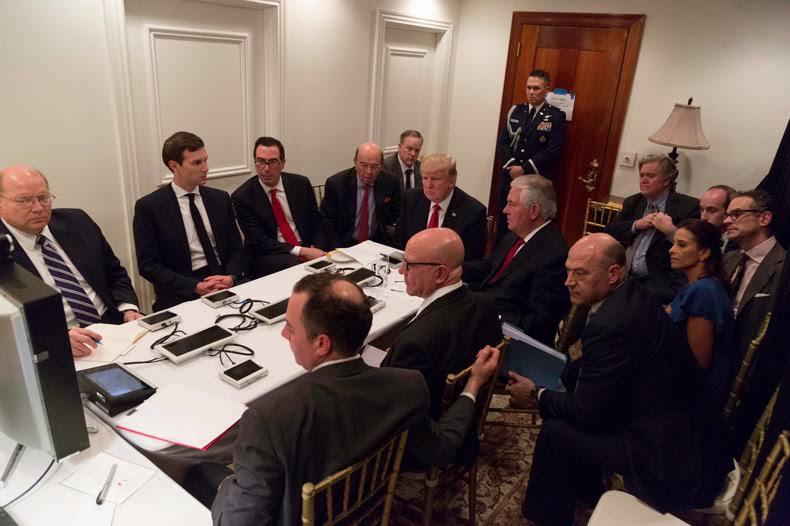 Once Again, Corporate Media Unites To Support U.S. Escalation in the Middle East

Trump’s latest aggression against the Assad regime has won him fans in editorial boards nationwide.

The New York Times insisted, “It was hard not to feel some sense of emotional satisfaction” at the attack.

This article was first posted at Fairness and Accuracy in Reporting.

Of the top 100 US newspapers, 47 ran editorials on President Donald Trump’s Syria airstrikes last week: 39 in favor, seven ambiguous and only one opposed to the military attack.

In other words, 83 percent of editorials on the Syria attack supported Trump’s bombing, 15 percent took an ambivalent position and 2 percent said the attack shouldn’t have happened. Polls showed the US public being much more split: Gallup (4/7–8/17) and ABC/Washington Post (4/7–9/17) each had 51 percent supporting the airstrikes and 40 percent opposed, while CBS (4/7–9/17) found 57 percent in favor and 36 percent opposed.

A list of the editorials with quotes showing support or opposition can be seen here. The list of the top 100 editorial boards in the country was taken from a 2016 Hill piece (10/5/16) on presidential election endorsements.

The San Jose Mercury News (4/7/17) and LA Times (4/8/17) were ambiguous, highlighting Trump’s past opposition to bombing Syria and insisting, in the Mercury News’ words, that he get “serious about setting policies and pursuing diplomacy.”

The one editorial that expressly opposed the attack, in the 15th-ranked Houston Chronicle (4/7/17), did so mainly on constitutional—not moral or geopolitical—grounds, writing, “As we said a year-and-a-half ago, the president cannot and should not use military force against Syria without a legislative framework.”

The Chronicle—like all of the editorials on the list—accepted the government of Bashar al-Assad’s guilt in the April 4 chemical attack on Khan Shaykhun, omitting qualifiers such as “alleged” or “accused.”

A consistent theme in the bulk of the editorials was that the airstrikes were necessary, but Trump needed a broader strategy as well as a constitutional or congressional “framework.” As FAIR (4/7/17) noted last week, the editorial and op-ed pages of top five newspapers in the country were uniformly in support of the airstrikes in the day after the attack, offering up 18 positive columns and zero critical.

Some spoke in emotional or visceral terms, most notably the New York Times (4/7/17), which insisted “it was hard not to feel some sense of emotional satisfaction” at the attack. “The US decision to launch cruise missiles at Syrian President Bashar Assad’s airfield felt good,“ the Denver Post (4/7/17) wrote.

The Pittsburgh Post-Gazette (4/9/17) seemed giddy to the point of incoherence with Trump’s new tough-guy posture, publishing this string of NatSec bromides:

The message for the Russian and Chinese leaders must be to stop using their murderous little proxies, Syria and North Korea, to poke and prod us. We don’t want any more wars, but we also showed with the attack on the Syrian air base that we will not put up with being trifled with by their little friends doing awful things like killing children with chemical weapons and waving missiles around. Russia and China need to get busy and put the reins on the Syrians and the North Koreans, now. The game is lethal and dangerous, and there is no good reason for it to continue.

The overwhelming support for Trump’s Syria strikes—which open a whole new theater of potential war in the Middle East—is consistent with FAIR’s studies of media reaction to US military action. A 2003 FAIR survey (3/18/03) of television coverage in the run-up to the invasion of Iraq, for example, found “just 6 percent of US sources were skeptics about the need for war. Just 3 of 393 sources were identified with anti-war activism.” As the US debated intervening in the civil war in Libya, pro-intervention op-eds outnumbered those opposed to or questioning intervention by 4-to-1 in the New York Times and Washington Post (Extra!, 5/11).