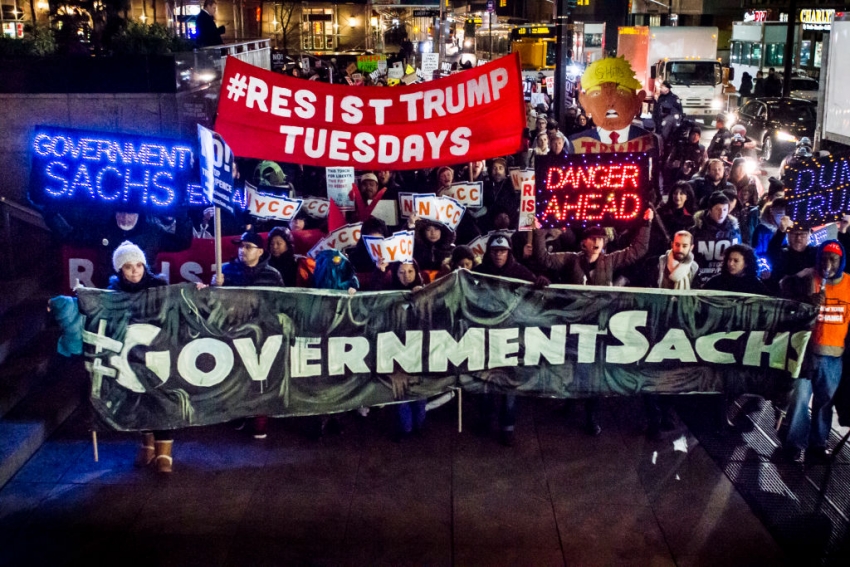 Trump’s Puerto Rico policy is a backdoor bailout for the financial giant.

"Trump should use all the tools at his disposal to help American citizens living in Puerto Rico shed the predatory debt that Goldman Sachs and other Wall Street firms sold them. Instead, he is giving the banks a free pass and using the bully pulpit to shift blame onto the people of Puerto Rico."

Donald Trump took to Twitter this week to deride an alleged bailout of Puerto Rico. However, his tweets belie the uncomfortable truth that his administration’s position on Puerto Rico actually amounts to a backdoor bailout of Wall Street firms like Goldman Sachs, whose alumni control much of his White House.

The federal “fair dealing” rule prohibits financial institutions from misrepresenting or omitting “facts, risks, potential benefits, or other material information” when doing business with municipal borrowers like Puerto Rico. It was standard industry practice for bond underwriters that pitched variable-rate debt deals to violate this rule.

The Securities and Exchange Commission (SEC) has the power to bring a disgorgement action against Goldman Sachs for violating the fair dealing rule and to make the bank return its ill-gotten gains from these predatory deals to Puerto Rico. In fact, the SEC has already taken similar action on behalf of bondholders harmed by banks that misled them about variable-rate municipal finance deals. However, Trump’s nominee to run the SEC is Jay Clayton, an attorney whose clients include Goldman Sachs and whose wife still works for the bank. By nominating a fox to guard the henhouse, Trump is creating a conflict of interest that could cost the people of Puerto Rico millions of dollars.

But Clayton is just the tip of the iceberg. Trump’s chief economic adviser and his choice to run the National Economic Council is Gary Cohn, who was the president and chief operating officer of Goldman Sachs until he resigned to assume his post in Trump’s administration. His Treasury Secretary is Steven Mnuchin, another Goldman alum who later went on to run OneWest Bank, the bank whose foreclosure practices earned him the moniker, “Foreclosure King.” Steve Bannon, Trump’s chief strategist who has recently fallen out of favor, also used to work at Goldman Sachs. And these men are just a sampling of the Goldman alumni who hold high posts in Trump’s White House.

Trump should use all the tools at his disposal to help American citizens living in Puerto Rico shed the predatory debt that Goldman Sachs and other Wall Street firms sold them. Instead, he is giving the banks a free pass and using the bully pulpit to shift blame onto the people of Puerto Rico. The SEC has the legal authority to force Goldman Sachs to return millions of dollars to Puerto Rico but Trump has nominated a man with very close ties to the bank to run the SEC, potentially stifling any legal action. This amounts to a backdoor bailout of Goldman Sachs. This is disappointing but not surprising, since—true to the firm’s nickname, “Government Sachs”—Goldman Sachs alumni run the Trump White House.