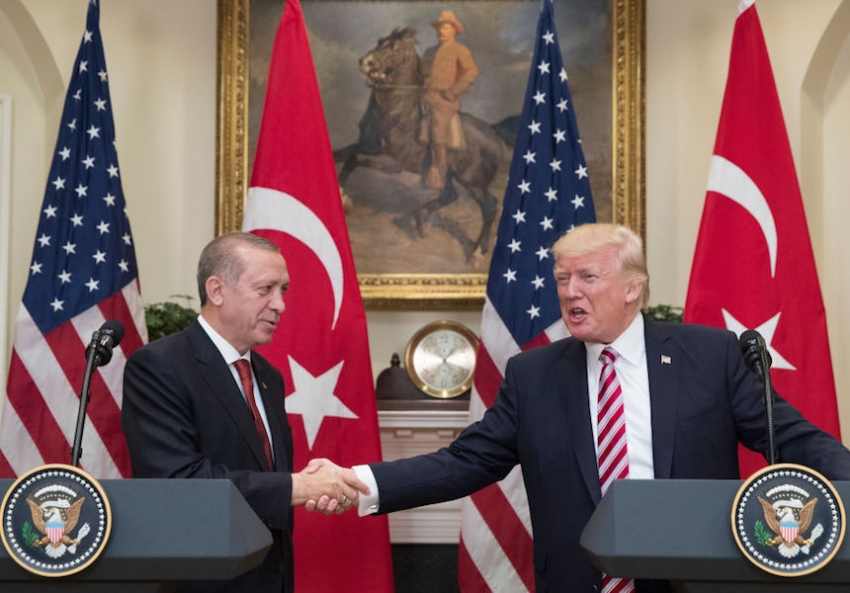 Trump and Erdogan shake hands in the White House on May 16. (Michael Reynolds-Pool/Getty Images)

As Tensions Flare Between Turkey and the Kurds, the U.S. Backs Both Sides

Negotiations, not more U.S. weapons, are needed to resolve the decades-long conflict.

The growing incoherence in U.S. policy toward Turkey and the Syrian Kurds is unsustainable.

On Tuesday, Turkish President Recep Tayyip Erdogan made his first visit to the Donald Trump White House. The visit came amid escalating tensions between the two countries around the growing U.S. military partnership with Kurdish groups in Syria.

The meeting took place three weeks to the day after Turkish warplanes bombed a base belonging to the Kurdish People’s Protection Units (YPG) on Mount Karachok in northeastern Syria, killing at least 18 of its fighters. The bombing resulted in days of cross-border clashes and threats by Turkey to launch a second incursion into Syria. It also heightened long-simmering tensions over the United States’ role as an ally of both parties.

Turkey considers the YPG to be a proxy of the Kurdistan Workers’ Party (PKK), which has fought a decades-long insurgency against the Turkish state. Since 2014, however, the YPG has also become the United States’ primary partner in its fight against ISIS in Syria, and is a central actor in ongoing U.S.-led efforts to capture the city of Raqqa from the Islamic State. The U.S., which ostensibly supports Turkey—a NATO Member and long-term “strategic partner” in the region—in its “War on Terror” against the PKK, navigates this tightrope by maintaining a distinction between the YPG and PKK. But given the intertwined histories and close working relationship between the two groups, this distinction is hard to maintain in practice.

Last year Cemil Bayik, a major leader in the PKK, told the BBC that the group has developed direct contacts with U.S military. Following the bombing, U.S. military personnel were documented touring the wreckage with YPG officials, one of whom was a well-known PKK commander.

In the aftermath of the airstrikes, U.S. officials struggled to convince their Kurdish partners that they were committed to them. The attacks had stoked larger fears among the Kurds that the U.S. could abandon them to fight Turkey alone once ISIS is defeated. Such fears are compounded by the casual manner in which certain U.S. government officials have often spoken about the relationship. Some Kurds alleged that the U.S. had failed to prevent or was even complicit in the attacks.

The U.S. State Department expressed “deep concern” over the strikes, and in a further show of support, U.S. soldiers attended a ceremony for YPG fighters killed in the Turkish bombings. As of now, U.S. soldiers have taken up positions along the Turkish-Syrian border in order to prevent further hostilities between its two wayward allies.

Yet Kurdish officials demanded more from the United States, calling on it to enforce a No-Fly Zone over its territory in northern Syria to prevent future attacks. One Syrian Kurd official even suggested that Trump was in part to blame for the strikes, saying Trump’s congratulatory phone call following Erdogan’s victory in a highly controversial constitutional referendum on April 16 had emboldened the Turkish President.

The day after the attack, Nesrin Abdullah, a spokesperson for the YPJ (an all-women’s branch of the YPG), told reporters the U.S. had not taken a firm enough stance against Turkey’s aggression, saying that simple responses such as “ ‘we are concerned or uncomfortable with these attacks,’ ” were not enough. “If there is another such attack and the response is the same then it would mean they are saying ‘yes’ to Turkey’s approach. This is how we view it.”

She also indicated the YPG could withdraw from the Raqqa operation entirely if the U.S. attitude did not change.

“Our people have demanded an answer from us as to why the coalition has not provided a stronger response to Turkey,” she said. “If the coalition does not take a clear position then we will pull back our forces in Raqqa. … We are not anyone’s stick with which they can just beat their enemies.”

The U.S. has since taken further steps to reassure its Kurdish allies in Syria. Just last week, the Trump administration signed an order allowing the U.S. military to step up its arming of the YPG in preparation for the latest stage of its offensive on Raqqa. A few days later the Syrian Democratic Forces (SDF)—an umbrella group of Arab, Syriac and Kurdish groups built around the YPG—announced that it would resume its operation to capture the city from ISIS, now backed by U.S. weapons and airpower,

The SDF are now positioned just a few miles from the Raqqa city center. The final battle for Raqqa, where ISIS has declared its capital, promises to be particularly long and painful—not only for the combatants, but for the hundreds of thousands of civilians who live there. Scores, if not hundreds, of civilians have already been killed (see here and here) in coalition airstrikes in recent months as SDF forces advanced on the city. As with the battle to capture Mosul from ISIS in Iraq, now in its seventh month, the intensity of the fighting will only increase as the SDF attempts to enter the city itself.

Deep and ongoing tensions between Syrian Kurds and Turkey are only likely to make this situation worse. If Turkey resumes its attacks during the battle, it could overwhelm the capacity of Kurdish officials to cope with the tens of thousands of refugees expected to flee from Raqqa, not to mention the thousands of Syrian internally displaced persons and Iraqi refugees already sheltering in the region. The fighting might be prolonged for months, which could destabilize one of the few safe havens for those fleeing the violence in northern Syria. Finally, escalated conflict could lead to even further violence and political turmoil in Turkey, home to millions of Kurds as well as over three million Syrian refugees. Some commentators have even suggested it could pull the United States into conflict with Turkey.

The growing incoherence in U.S. policy toward Turkey and the Syrian Kurds is unsustainable. Yet there was little that occurred during Erdogan’s visit to suggest the United States has developed a fundamentally new approach under the Trump administration than the one adopted by his predecessor. Before the meeting, Trump promised that he and Erdogan would have “long and hard discussions.” Yet the pair emerged for a press conference after a closed-door meeting lasting just 20 minutes. In the conference, Trump declared his full support for Turkey’s fight against the PKK and declared that the group would be given “no safe quarter.”

A few hours after the meeting—around the time Erdogan’s bodyguards were brutally assaulting Kurdish (and other) protesters in front of the Turkish ambassador's residence in Washington—Pentagon spokesperson Dana W. White announced that Defense Secretary Jim Mattis and Turkish Defense Minister Fikri Işık had agreed to increase cooperation around Turkey’s counter-PKK efforts.

Yet it remains uncertain what such cooperation might mean for both the U.S. partnership with the Syrian Kurds or for the millions living in Turkey’s Kurdish regions who continue to be affected by the conflict, which has left hundreds dead and displaced hundreds of thousands of people over the past two years.

Responding to Erdogan’s meeting with Trump, PKK commander Murat Karasu told reporters May 18th that this policy was bound to fail in practice. “Nothing like this can work,” he said. “According to the outcome of the meeting the [U.S.] relationship with the PYG and SDF will continue, but at the same time support will be given to Turkey to destroy the PKK. This is a dirty policy and cannot be accepted.”

Given the seemingly contradictory nature of the U.S. position there is much that remains uncertain about the U.S.'s role going forward. One prominent Turkish journalist declared the Trump-Erdogan summit the most unsuccessful Washington visit ever by a Turkish leader, insofar as nothing of substance appears to have been accomplished. But one thing is clear: Due to the interlocking conflicts and alliances between Turkey, the Kurds and the United States, any lasting peace in Syria will require a peace in Turkey. Empty saber-rattling about the PKK and terrorism will not help achieve such a peace, nor will easy, albeit justified, condemnations of Erdogan and his autocratic politics—which all too often slip into a generalized anti-Turkish rhetoric that is as dangerous as it is ineffective. Instead, the U.S. must end its hypocritical, destructive and ultimately self-defeating policies in Syria and become a genuine advocate for peace and real diplomacy. It might start with the PKK and Turkey.

Patrick Lewis is a Ph.D. student in anthropology at the University of Chicago who works in Turkey and Kurdistan.