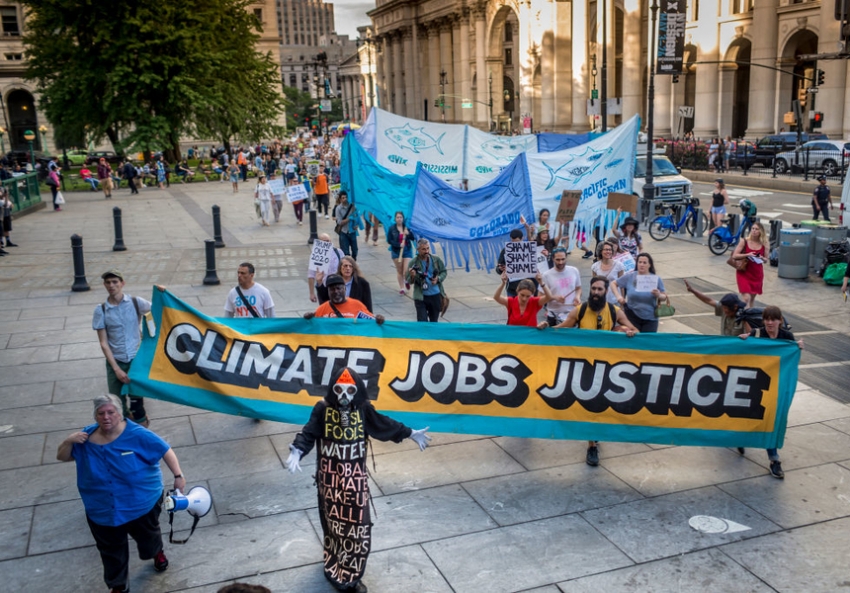 Hours after Donald Trump announced that he will withdraw the U.S. from the Paris climate agreement, hundreds in New York City protested in the streets. (Photo by Michael Nigro/Pacific Press/LightRocket via Getty Images)

Lawmakers stalled as advocates pushed to get an ambitious climate bill through the state senate before the legislative session ended.

“If you cobble together enough city and states, then the federal withdrawal from Paris becomes less and less significant."

This piece has been updated to reflect that the legislative session has ended, and the climate bill was not brought forward to a vote.

The eight members of New York’s Independent Democratic Conference (IDC), may not be the first people you’d expect to sponsor a piece of landmark climate legislation. In the traditionally blue Empire State, the IDC caucuses with Republicans, allowing the state’s GOP to form a majority—all despite the fact that New Yorkers reliably elect a Democratic majority into their statehouse. The reason IDC members cite for the alliance is pragmatism, and a desire to make bipartisan action more possible. The reality, more often than not, is that they put a damper on progressive efforts.

That’s part of why their unanimous sponsorship of the Climate and Community Protection Act (CCPA)—a bill lauded as a model for other states hoping to defy Trump’s attacks on the environment—came as a surprise to Dan Sherrell. Sherrell is campaign coordinator for New York Renews, the coalition of more than 100 labor, community and environmental groups that drafted the CCPA and has attempted to get it passed through New York’s state legislature since just after the Paris Accord was agreed upon in late 2015.

After being introduced by non-IDC Assembly Speaker Carl Heastie, the bill passed through that body by a wide margin on Monday night, after a short debate. In the senate, the CCPA’s fate fell to New York State Senator—and IDC member—Tony Avella, the bill’s lead sponsor who, alongside fellow sponsor and IDC member Jeff Klein, would have had to convince Senate Majority Leader John Flanagan to bring the bill to a vote in the chamber in order for it to get passed. Avella’s office did not respond to In These Times’ request for a comment. Even though the IDC has endorsed the bill, New York Renews members feared Avella may continue stalling until the legislative session is slated to end today, extracting the good PR of having symbolically backed progressive legislative while doing relatively little to get it passed into law. Worryingly for the coalition, two IDC members earlier this week also voted to defund energy and environmental priorities that the CCPA would enshrine into law.

“The IDC has chosen to take leadership on the CCPA. We welcome them to the climate fight, and call on them to bring this bill to a vote,” Sherrell told In These Times bef. “This could not be more crucial after Trump’s exit from the Paris Accord.”

But his fears proved well founded. Flanagan did not bring the CCPA to a vote, and the legislative session expired at the end of the day on Wednesday. Sherrell tells In These Times that New York Renews will be calling on the IDC and the governor to pass the bill in a special session of the legislature this summer, when lawmakers are expected to reconvene to discuss New York City's public school system. “If they're coming back to deal with schooling for NYC kids,” Sherrell says in an email, “then surely they can pass a bill to protect those kids' future from a worsening climate crisis.”

As the prospects for climate action at the federal level grow increasingly bleak, the impact of states like New York—and bills like the CCPA—could extend well beyond their borders.

After the White House announced it was withdrawing the United States from the climate treaty on June 1, attention has shifted increasingly to what cities and states can do to stem rising tides. New York State Gov. Andrew Cuomo, California Gov. Jerry Brown and Washington Gov. Jay Inslee teamed up to create the United States Climate Alliance, now comprised of 13 states, that seeks to uphold the commitments laid out in the Paris Agreement through state-level policy.

The California legislature is pushing its own ambitious legislation, and is one of several Western states teaming up with Canadian provinces to collaborate on climate solutions. Many now see New York, and the CCPA in particular, as presenting the next opportunity for promising state-level action. As Sherrell puts it, New York can be a “beach head for climate progress in the next four years.” Heather McGhee, president of the left-leaning think tank Demos, and progressive economist Robert Reich have called the CCPA “the most progressive climate-equity policy we’ve seen.”

So what exactly is this policy? The CCPA would task state agencies with creating individualized plans to reduce their greenhouse gas emissions, attempting to put some meat on the bones of Cuomo’s 2015 pledge to dramatically reduce emissions by 2050. The bill further stipulates that 40 percent of state energy funding be directed toward the low-income communities and communities of color most likely to be hit worst by climate impacts. The bill also requires that fair labor standards—including a prevailing wage—be enacted at all green projects receiving state funds. Such a transition, the bill’s backers argue, could create as many as 100,000 jobs statewide in the next several decades.

“New York Renews was co-founded by the environmental justice movement … after the People’s Climate March in 2014,” says Eddie Bautista, executive director of the New York City Environmental Justice Alliance. “It shouldn’t be a shock to anyone that justice and equity concerns are at the center of it. How could we possibly demonstrate leadership if we’re not incorporating what everyone now acknowledges to be the disproportionate impacts of climate change on communities of color?”

As Bryce Covert, drawing on a body of research, pointed out in The Nation last year, race is the most significant predictor of whether someone is likely to live near contaminated air, water or soil. Sixty-eight percent of African Americans nationwide live within 30 miles of a coal plant, and Black Los Angelenos are twice as likely to die during a heat wave as their white counterparts. And as Hurricanes Katrina and Sandy both showed, communities of color are more vulnerable to catastrophic damage from climate-fueled storms and the displacement that can follow them. By 2013, for instance, some 80 percent of residents who fled New Orleans’ predominately black Lower 9th Ward had not returned, and black residents were significantly less likely to return to the city in the year after the storm than non-black residents.

With its robust equity provisions, Bautista adds, the specific attention the CCPA pays to climate-impacted communities could be an example for other states. And the bill’s scale also shows that meaningful climate policy needn’t be kneecapped by Trump: “If a state as large and diverse as New York is willing to take this level of commitment, then surely the rest of the states could follow,” says Eddie Bautista, Executive Director of the New York City Environmental Justice Alliance. “If you cobble together enough city and states, then the federal withdrawal from Paris becomes less and less significant.”

But time is running out. NY Renews members and allies have flooded Avella’s office with calls, asking him to introduce the bill. Sherrell estimates from people who’ve told him about their calls to Albany that there have been around 500 so far, “but they’ve lost count,” he told me.

The CCPA has been in a similar spot before. It also passed through the Assembly in 2016 but never made it to the Senate. It was included in a version of the FY2018 budget debated this spring, though was nixed in the final budget Cuomo signed in April, after neither Cuomo nor the state senate made it a priority in their budget bills. But given the Trump administration, Bautista says, the stakes are higher this time. “It’s pretty hard to overestimate how important this moment is, particularly in light of the Paris withdrawal,” he says. “The only way that we’re going to be able to impede at least the worst of climate change is through a combination of local and state actions that fill the void left by the Trump-ocaplypse.”

This isn’t the first occasion progressives have had to be angry at the IDC. Ire against the caucus has been boiling since November’s election, and a number of state and national politicians—including Rep. Keith Ellison (D-MN)—have called on the caucus to rejoin Democrats so that the party can claim a proper majority. Given New York is one of the country’s most deeply blue states, progressive leaders are eager to have it punch at or above its weight in opposing Trump.

As Alex Shepard and Clio Chang wrote for The New Republic, “The situation in Albany would be weird in any political environment, but it’s highly problematic in the Trump era, when proposed federal immigration and health care policies have made millions of New York’s residents vulnerable. A Democratic majority in the Senate could protect these people.”

All this puts Democratic Gov. Andrew Cuomo in an awkward position. He’s generally content to go along with the IDC, in large part because his own priorities tend to favor constrained budgets. He’s refused to actively urge them to rejoin Democrats (though he’s said it would be “optimal” if they did).

Yet in the months following Hillary Clinton’s trouncing in the general election, the centrist wing of the party he represents has never been weaker than it is now on the national stage. Members of the New York Renews coalition—generally closer to the Democrats’ Bernie Sanders wing—see the CCPA as a chance to hold his feet to a fire lit by progressive voters. IDC sponsorship of the bill could turn the CCPA into a politically easy opportunity to challenge Trump on the national stage—something he seems inclined to do, given the flurry of climate-related announcements he made in the days after the White House’s withdrawal from the Paris Accord. Despite this, he's remained quiet about the CCPA.

Regardless of what happens in the Senate, Bautista says shock waves from the bill are already being felt. In early June, Cuomo announced the creation of a task force on climate jobs along with several other measures seemingly inspired by the CCPA. Language from the bill, too—including the 40 percent investment provision—was lifted almost verbatim and included in the “100 by '50” Act introduced by Sens. Jeff Merkley (D-Ore.), Bernie Sanders (I-Vt.) and others shortly before late April’s People’s Climate March, outlining a transition to 100 percent renewable energy usage by 2050. “This bill is just one of a variety of approaches that we’ll be advancing in the coming years,” Bautista says. Now, Avella and his caucus colleagues have to decide whether it will be allowed to move forward.

“The IDC was created as a way to get things done with the Republicans,” Bautista says of the bill’s still-uncertain prospects for passing through the legislature with bipartisan support. “So prove that it can!”