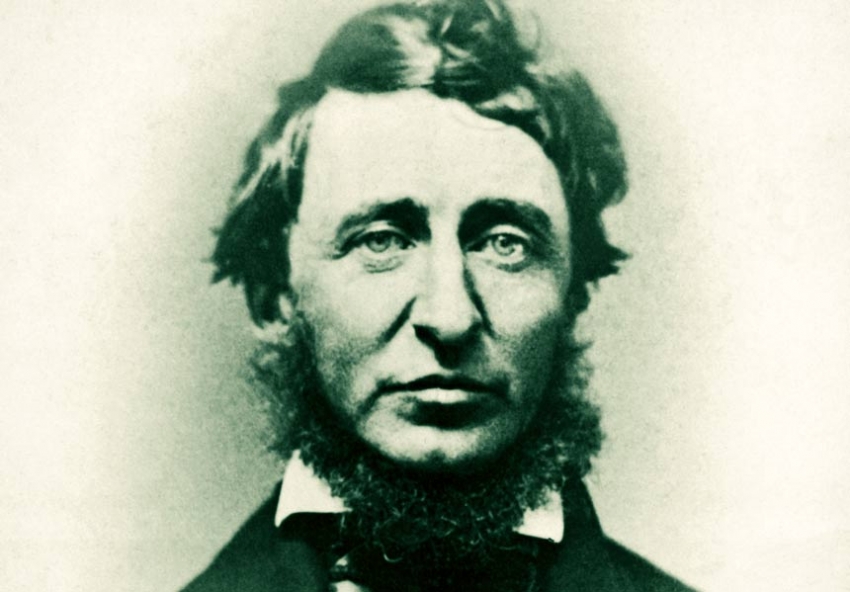 The Abolitionist of Walden Pond

Two hundred years after his birth, Henry David Thoreau is as relevant as ever.

If a law “requires you to be the agent of injustice to another,” he wrote, “break the law. Let your life be a counter friction to stop the machine.”

“Henry Thoreau,” wrote Ralph Waldo Emerson, “is like the wood god who solicits the wandering poet. … Very seductive are the first steps from the town to the woods, but the End is want & madness.”

He meant this as a knock—Thoreau’s friend and mentor was also a critic. But 200 years after Thoreau’s birth on July 12, 1817, the wood god of Walden Pond continues to seduce wandering poets, philosophers and revolutionaries the world over. His sylvan siren song has beguiled some of history’s most influential rebels, from Mahatma Gandhi to Martin Luther King Jr., Emma Goldman to Edward Abbey. Their transformative legacies suggest the “want & madness” found by Emerson weren’t the end, but a beginning.

Notre Dame professor Laura Dassow Walls explores this enduring appeal in the new biography Henry David Thoreau: A Life. Thoreau lived through years of tumult: The early gasps of industrialization transformed the land, slave owners expanded their power through the Mexican-American War and the Fugitive Slave Act, and a commercializing economy reshaped the way people lived and interacted. Thoreau met all three developments with uncompromising opposition. With a resolute individualism and devotion to the public good, he committed to a life of dissent, prodding and badgering his neighbors into consciousness.

One imagines how this behavior could be annoying, and he was sometimes crusty (“as for taking T.’s arm,” wrote Emerson, “I should as soon take the arm of an elm tree”), but on the whole he was popular with his neighbors—especially children and other wild creatures, the latter of whom were said to come at his call. Concord residents repeatedly elected him to coordinate the local lyceum, a speaker series on the issues of the day. He used the pulpit both to workshop his own material and, over the protests of conservative townsfolk, to showcase the North’s most ardent abolitionists.

Walls writes that, for Thoreau, “slavery was … one symptom of a larger sickness preying on a universe of beings, not all of them human.” In his notebooks, support for abolitionists like Frederick Douglass sits alongside support for the fish displaced by a local dam (“armed only with innocence— and a just cause”). The dam and the slave patrol both served to constrain those who should be free to live on their own terms.

Thoreau blames “institutions,” especially the state, for using otherwise well-meaning people as jailers, soldiers and other instruments of oppression. But the bulk of his frustration was directed toward cowardly, unprincipled individuals who let themselves be used—or stood by in silence. In his “Plea for Captain John Brown,” Thoreau excoriates those who would condemn Brown for his violence against slave owners while remaining silent on the violence of slavery itself—let alone the violence of the army, or those who “hunt Indians.”

This critique fits with Thoreau’s radical approach to complicity. He quit his first job as a schoolteacher, despite badly needing the money, when the headmaster demanded that he strike his pupils. Later, Thoreau spent a night in jail for refusing to pay his poll tax in protest of slavery and the Mexican-American War. If a law “requires you to be the agent of injustice to another,” he wrote, “break the law. Let your life be a counter friction to stop the machine.”

This was too much for Emerson, who saw it as an impossible standard of purity. And it’s true that the standard Thoreau set was impossible—he was often vexed by his own failure to meet it. “I cannot fish without falling a little in self-respect,” wrote the sporadic vegetarian.

Today’s progressive may be inclined to dismiss Thoreau’s obsession with purity—an ethical lifestyle being impossible under capitalism—and while this attitude isn’t wrong, it does miss something crucial.

While Thoreau’s refusal to pay the poll tax didn’t slow the operation of the state, it was brilliant propaganda. He forced his peers to examine a machine they might have preferred to ignore, and showed his neighbors—and, later, his readers—that it was possible to say no, even for a day. His attempts at purity expand the imagination, showing us things need not be as they are. His forays into the wild form the other side of this story, offering a glimpse into the lives we could be living. Ultimately, both his guilt over complicity and his sense of connection to the outdoors seem to come from the same radical empathy for all other beings.

Following the trial and re-enslavement of Anthony Burns, a fugitive slave arrested in Boston in 1854, Thoreau wrote, “We are wholly within hell. … My thoughts are murder to the State, and involuntarily go plotting against her.”

But Thoreau wasn’t done: “It chanced the other day that I scented a white water-lily,” he went on. The flower’s pleasant smell “show[s] us what purity and sweetness reside in, and can be extracted from, the slime and muck of earth.”

It’s a simple metaphor, but one that gets at why Thoreau still resonates. Unlike those gurus and saints who float above the mortal plane—and though at times he aspired to be like them—the spiritual fulfillment Thoreau sought was in the physical: the forest, the swamp, the fragrant white water-lily. He shocks us by how much of-the-world he is, jolting us into more direct experience, embedded and embodied in a living planet.