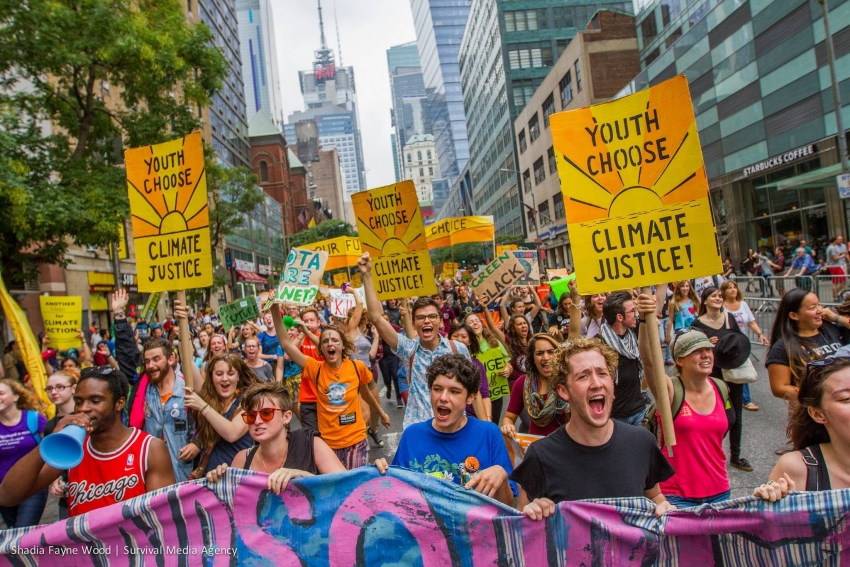 Crowds gathered in New York for the People's Climate March in September of 2014. (350.org)

Millennials Are Killing the Oil Industry

Hell yeah we are.

As is the case with a host of other progressive issues, the overwhelming majority of millennials—91 percent—believe in climate change, and the vast majority support government action to do something about it.

Depending on who you ask, millennials are either lazy, trophy-weaned basement dwellers or ruthlessly efficient killing machines, taking down everything from Buffalo Wild Wings to department stores.

But unless you peruse the business press and semi-obscure trade publications, you may have missed the news about our latest mark: the fossil fuel industry. A handful of articles have pointed out that the workforce of the oil industry is rapidly aging, and companies are having trouble attracting younger workers into their folds.

According to a recent report by pollsters EY, 57 percent of teens now see the fossil fuel industry as bad for society, and 62 percent of those aged 16 to 19 say working for oil and gas companies is unappealing. Other findings suggest that millennials dislike the oil industry the most of any potential employer, with only 2 percent of college graduates in the United States listing the oil and gas industry as their first-choice job placement.

Given that a majority of millennials now also reject capitalism, the fact that we don't feel too much warmth towards the industry that’s been at its dirty, beating heart of it for 300 years shouldn’t come as a surprise.

Millennials are now the largest part of the U.S. workforce, meaning their flight could spell massive problems down the road for the world’s most destructive companies. To win back the youth, a series of recent ads from the American Petroleum Institute, the fossil fuel industry’s lobbying arm, announced “This ain’t your daddy’s oil…Oil strikes a pose. Oil taps potential. Oil pumps life,” flashing pictures of products made with oil—like spray paint! Because young people like graffiti, right?

Not more than we like being able to breathe air and drink water. Aside from having a few suspicions about an industry whose business model stands directly at odds with a habitable planet, millennial workers also want more from their jobs than a paycheck—including a sense of doing something halfway decent for the world.

As the consulting group McKinsey wrote in its report on the industry’s future, “Millennials don’t just want personal career growth; they expect to make a positive contribution to society … If companies want to attract the best and brightest, they must design ways for employees to make an impact beyond the walls of the company.”

This might be difficult for an industry hell-bent on wrecking the planet. Some 75 percent of existing coal, oil and natural gas reserves have to stay buried in order to avert catastrophic levels of warming, and de-carbonization needs to happen rapidly at every level of the economy.

As is the case with a host of other progressive issues, the overwhelming majority of millennials—91 percent—believe in climate change, and the vast majority support government action to do something about it. Because of this, there have been massive, millennial-led campaigns targeting the fossil fuel industry, like the one to divest major institutions’ holdings from coal, oil and natural gas companies.

If there’s any other defining trait of millennials, it’s that we’re a political generation, and lean fairly far to the left. We occupied Wall Street and turned out in droves to back socialists Bernie Sanders here and Jeremy Corbyn in the United Kingdom.

So, when it comes to killing the fossil fuel industry, game on.