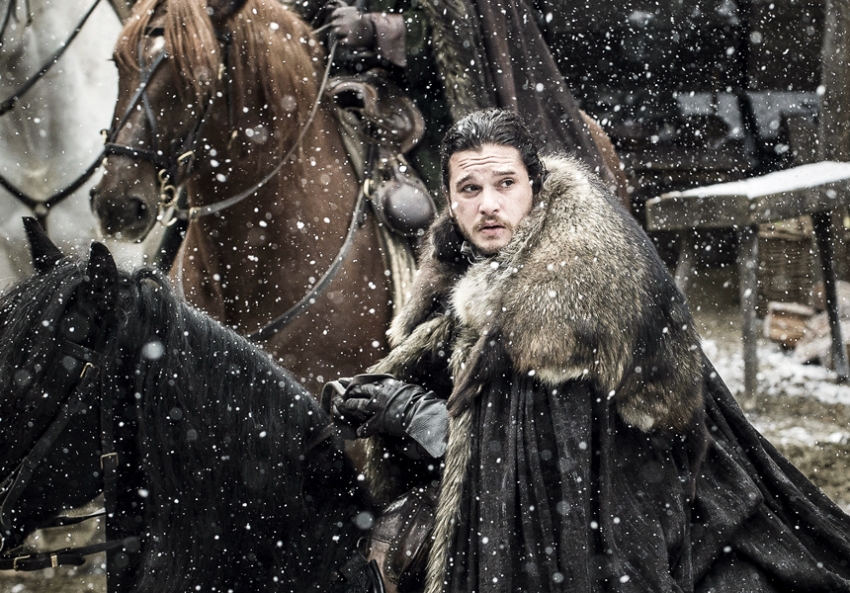 Jon Snow is the only main character to have encountered the real threat to the North. (HBO)

The hit HBO drama makes a carefully constructed argument for the futility of war.

Every fight between humans undercuts the solidarity of the peasant-class men and women whom Jon will one day need to call upon to combat the true foe.

The sprawl, the spectacle, the sex, the swords, the sorcery—if you’re looking for reasons why Game of Thrones has become the most popular show on TV, they’re easy to find. But the epic fantasy might also be pop culture’s most prominent anti-war satire since Dr. Strangelove. It’s one long shaggy dog joke at the expense of military conflict. For the bulk of its six-plus seasons, Game of Thrones has chronicled the bloody power struggles of various aristocrats and their hapless followers—while, unbeknownst to most, an army of demons and zombies in the icy northern wastes masses to swoop down and slaughter them all. The wars making up most of the series’ action are not only pointless, but self-defeating: The only enemy these characters need to be fighting is a supernatural one.

Somehow this lesson is often missed, both by moralists who find the series’ violence exploitative and “bad fans” (as The New Yorker’s  Emily Nussbaum calls them) in it for the beheadings. Perhaps it’s the simplicity of the conceit that hides the anti-war message in plain sight. Or maybe it’s the show’s unflinching depiction of man’s inhumanity to man that enables viewers to confuse portraying violence with endorsing it.

Yet the show has been true to the approach of George R. R. Martin, author of the novels on which the show is based and a conscientious objector during America’s assault on Vietnam. As Martin said in a 2012 interview, he does not shy away from capturing the “emotional stirring we feel when we see the banner flying in the wind and we hear the bugles charge”—which, “those of us who are opposed to war … tend to forget.” However, he noted, “If you’re going to write about war and violence, show the cost. Show how ugly it is. Show both sides of it.”

For its first few seasons, Game of Thrones misdirected viewers with a tale of civil war between the Starks and the Lannisters. Later, that central conflict spiderwebs, with bloodthirsty lesser lords entering the fray. Meanwhile, to the east, the deposed heir to the Iron Throne, Daenerys Targaryen, leads a rag-tag alliance of soldiers and freed slaves (plus three semi-tame dragons) against their former masters. Noble as this cause may be, her main goal remains unseating the Lannisters and reclaiming the throne—in other words, playing the titular game.

So it has fallen to Jon Snow, a black-clad bastard raised in House Stark, to attend to the real story. On the far side of the Wall, a 700-foot-tall, continent-wide defensive fortification, looms a threat far more fearsome than any rival House. This is the stalking ground of the White Walkers, icy demons with crystal-blue eyes whose slain foes rise again as an army of the dead. If they win, they’ll bring an eternal winter that could wipe out all life on the planet.

Even at the Wall, however, senseless infighting often carries the day. Season 4’s centerpiece, “The Watchers on the Wall,” shows Jon and the forces he commands defend against the “wildlings,” rustic humans unfortunate enough to live on the wrong side of the Wall. It’s a tooth-and-nail struggle for survival, but also a refugee crisis: The wildlings are only trying to flee the undead hordes. Indeed, Jon’s empathy for their plight eventually leads him to allow them through peacefully, an act of mercy for which his xenophobic underlings murder him. Every fight between humans undercuts the solidarity of the peasant-class men and women—routinely drafted into their supposed betters’ battles—whom Jon will one day need to call upon to combat the true foe.

The show’s creators use meticulous audio and visual cues to convey this message, depicting death and horror on a scale previously unimaginable on television. The series’ first major battle, Season 2’s “Blackwater,” has the Lannisters fend off an invading fleet with “wildfire,” an explosive analogous to napalm. Director Neil Marshall, whose prior films double as minor-key dirges about the cost of violence, scores the battle with the screams of burning, drowning men—a sound effect most TV shows would just as soon eschew.

Other battle sequences make war’s consequences even clearer. In “The Battle of the Bastards,” Jon’s soldiers collide with the forces of the psychotic Ramsay Bolton in a fight so intense that the bodies actually pile up into a geographical feature of the battlefield—a mountain that the survivors must climb, or suffocate under and die.

As far as the show is concerned, that’s what war is: a pile of massacred bodies. It’s the laser focus of the powerful on accruing more power, regardless of the costs—the pileup of the dead, the pillaging of the land, the immiseration of the living—and heedless of external threats. In the new season, overcoming this lethal myopia has become the characters’ central challenge. The real world may not have White Walkers, but in them we see the all-too-real forces threatening us all: looming climate catastrophe, the grinding inequality of late capitalism, the brutality not of our so-called enemies but of war itself. We can face them together, or keep playing the game.

We’re fortunate to have a series willing to make this case forcefully, without didacticism. Until next year’s finale, we won’t know what political system will arise south of the Wall when (and if) humanity beats back its existential threat, and there’s no reason to think it will be an improvement. But while solutions may be in short supply, the illustration of the futility and waste of war is, well, stark. Game of Thrones challenges us to rise above our squabbling and confront the common threats ahead.

Sean T. Collins has written for the New York Times, Rolling Stone, Vulture, Pitchfork, Vice, The Comics Journal and other publications. With his partner, cartoonist Julia Gfrörer, he co-edited Mirror Mirror II, a comics and art anthology published in June. He can be found online at SeanTCollins.com and BoiledLeather.com, on Twitter @theseantcollins.