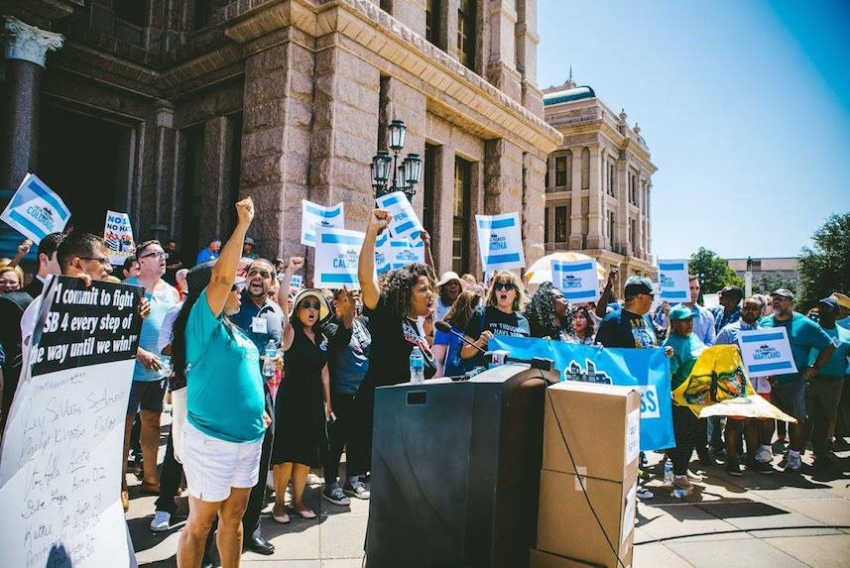 Local Progress officials took a break from the conference to demonstrate with the Workers Defense Project and Texas Organizing Project in front of the Texas capitol. They were protesting anti-immigrant S.B. 4, a measure to preempt sanctuary city policies. (Local Progress/Bryan C. Parker Photography)

Diverse, Radical and Ready to Resist: Meet the First in the New Wave of Local Progressive Officials

Informed that she was “outside the norm for St. Louis politics”—at least in the view of its “white, wealthy, political power establishment”—St. Louis Alderwoman Megan Green has, nevertheless, won several election contests since 2014.

AUSTIN, TEXAS—When San Francisco supervisor John Avalos helped form Local Progress, a national network of progressive elected officials, he was dismayed by his own city’s left-leaning political scene. The Bay Area was a hotbed of innovative policy-making. But getting his city hall colleagues to work together more closely, rather than just promote their own pet projects and personal “brand” was not easy. “Politics should be a team sport,” he says. “And we didn’t have that enough.”

On the other side of the country, Bill Henry, a progressive on Baltimore’s city council, often felt like a minority of one. Henry was among 30 municipal officials from around the country who joined Avalos at a founding meeting of Local Progress in November 2012. He found the other attendees to be “people who weren’t afraid to say things should be a lot different”—in short, the meeting looked like “the council I wanted to have at home.”

Local Progress initiators began reaching out to peers in other cities—some in solidly blue states, some bucking conservative state governments. The resulting network has a twofold goal, according to Avalos, “not only [planting] the seeds of local progress—planting seeds of resistance.”

When Local Progress members—now numbering more than 600, from 328 municipalities in 41 states—met in Austin on July 27-29, their theme was, in fact “Resistance and Progress.” Trump’s victory drove turnout and sharpened the focus on the former, with progressive city councilors, mayors, school board members, and county supervisors discussing how to fend off conservative counter-attacks from Washington and many state capitals. But participants didn’t lose sight of plans to make “rebel cities” a model for what government can accomplish, now and in the future, under better leadership. They swapped advice on passing measures like model ordinances for rent control, minimum wage increases, police accountability measures, protections for immigrants, and keeping the planet from over-cooking through public investment in sustainable infrastructure. (Late July temperatures in the Lone Star state certainly helped focus attention on the impact of climate change, even inside the air-conditioned bubble of a University of Texas conference center!)

The high turnout also reflected in part the new energy around local progressive races coming out of the Bernie Sanders campaign. Groups like the Working Families Party, People’s Action, and Our Revolution are all encouraging and supporting progressives to run for office. For example, one attendee was Andrea Jenkins, a transgender African-American woman running for city council candidate in Minneapolis, who has earned the backing of Our Revolution, Congressional Progressive Caucus co-chair Keith Ellison, and SEIU and AFSCME locals.

Local Progress adds a layer of support for these new candidates: having ready access to a national clearinghouse of information about successful municipal reforms is helpful during a first-time campaign and, if that’s successful, in post-election work. At Local Progress annual gatherings, most of the discussion is organized, in small workshops, to help actual practitioners share personal experiences, political tips, and policy ideas directly.

What it looks like to be successful in “down ballot” elections was very much on display in the ethnic, racial, geographical and gender diversity of the crowd. Some of this year’s participants, like Kansas City, Mo., city councilor Jermaine Reed, need little instruction on why poor and working class Americans can benefit from municipal uplift. Now running for mayor, Reed is one of four African-American brothers raised by a single mother who is still working and “never made more than $11 an hour.”  He personally experienced having gas and electricity shut off at home because bills couldn’t be paid. At age 14, he found himself living in a homeless shelter.

“On an issue like raising the minimum wage, you don’t have to convince me,” he told his colleagues. “I know the story. I’ve lived the story. I am the story.”

Another compelling speaker was Rashida Tlaib, the first Muslim woman to serve in the Michigan legislature (and from a district only 2 percent Arab-American). The daughter of an auto worker born in Palestine and the oldest of his 14 children, Tlaib grew up in southwest Detroit among neighbors predominantly African-American and Latino; they, like her, assumed that the ever-present smell of local industrial pollution was “normal,” she recalls.

Now termed out, like John Avalos in San Francisco, Tlaib urged Local Progress members to be pro-active in causes ranging from public health to environmental protection. “We have to go beyond introducing bills, holding a press conference, and just showing up,” she told them. During her six years in office, Tlaib created a neighborhood service center, helped constituents raise money for community improvement projects, become a plaintiff in public interest lawsuits, and organized regular “Town Hall” meetings so citizen complaints, about public services, could be aired in the presence of relevant city and state officials .

Fixing problems often requires that union or community organizers run for office themselves. Former labor council leader Cindy Chavez is now a Santa Clara County supervisor representing 360,000 people. But she attributes her political career to becoming a home-owner in downtown San Jose, CA. After someone fired shots into her house, she was told by an investigating officer that her new neighborhood was “unsafe” (hardly a revelation at that point). His advice was: “You should move.” Instead, she ran for city council, then mayor (unsuccessfully) and four years ago, the Board of Supervisors.

As an elected official, Chavez has worked on public safety issues like how police handle “intimate partner violence” and formerly incarcerated residents re-enter the community. Next month, Santa Clara County will begin a trial program—that she and other supervisors supported—to place non-violent drunks in “sobering centers” with support services provided by the county’s behavioral health department, rather than jailing them for public intoxication.

Unlike Chavez, who graduated from San Jose State, or Tlaib, who went to law school, 44-year old Jennifer Mecozzi has only a high school degree. But that didn’t stop her from getting elected to the Buffalo Board of Education, where her colleagues include Trump supporter Carl Paladino, a wealthy upstate New York real estate developer and former Republican gubernatorial candidate.

A public school parent and mother of four, Mecozzi was endorsed by the Buffalo Teachers Federation. She campaigned for more school-based services for the children of refugees and other foreign immigrants recently arrived in Buffalo. “I’m a watchdog for my community but I’m a bulldog for my babies,” says Mecozzi, a long-time staff member for PUSH-Buffalo, a non-profit group that fights for sustainable low-income housing.

Like other successful candidates who are now part of a progressive faction on a local elected body, Mecozzi faced the post-election challenge of rallying her neighbors to do more than just vote for her. “I’m challenging my constituents to help me make change,” she said. “I’m the only person on the board from a grassroots background. So everyone is looking to me to solve everybody’s problems. And I can’t do it alone.”

Hanging like a pall over the Austin meeting was the growing use of legislative pre-emption to thwart local problem solving (or related Trump Administration defunding threats). In state capitals across the country, foes of reform are working—often in bipartisan fashion—to block the creative exercise of municipal power on behalf of workers, consumers, undocumented immigrants, transgender people and the environment. During their convening, Local Progress leaders trekked over to the Texas state capitol building to protest Republican Governor Greg Abbott’s signing of state Senate Bill 4 earlier this year. That draconian measure, now being challenged in court by the city of Austin and others, would impose criminal penalties on elected officials and local law enforcement personnel who uphold sanctuary city policies.

Local officials facing such threats got some bracing advice from Larry Krasner, the civil rights attorney and death penalty foe on track to become Philadelphia’s next District Attorney. In a keynote address, Krasner recounted his past representation of people arrested for civil disobedience, some of whom helped engineer his upset victory in a Democratic primary three months ago.

In Philadelphia, he said, “the next generation of progressive leaders are labor and community organizers…activists who do politics better than politicians.” But he urged anyone in the room, whether facing re-election or a first time bid for office, “to be as radical as the truth requires and do it without fear.”

St. Louis Alderwoman Megan Green has been one such profile in courage already. Only 34, she ran initially, as an independent when her local Democratic committee wouldn’t back her. Then, she participated in Ferguson-related police brutality protests, supported the Black Lives Matter movement, and tackled public safety reform issues in a way that made her instantly unpopular with the St. Louis police union.

Informed that she was “outside the norm for St. Louis politics”—at least in the view of its “white, wealthy, political power establishment”—Green has, nevertheless, won several election contests since 2014. She survived a blitz of negative ads by well-funded opponents. She helped organize a Bernie Sanders-backed effort to shake up the local Democratic Party establishment and now serves on the state and national Democratic committees.

“It’s not enough just to have progressives in St. Louis,” Green acknowledged. While in Austin, she and others in Local Progress pledged to strengthen their mutual support network through more personal financial donations and joint action. Examples of the latter, cited at the meeting, included “sign-on” statements by hundreds of elected officials calling for a minimum wage hike in New York state, rejecting anti-Muslim bigotry everywhere, and protesting collusion between federal housing officials and private equity firms in the sale of distressed mortgages.

Local Progress also unveiled a flashy new advertisement for itself, in the form of a short video celebrating its coordinating role, collective accomplishments, and six years of steady growth.

The film’s message: “if you’re outraged by the Trump agenda, you should run for local office” because that’s where the action is going to be until the “local and state leaders of today become national leaders.”