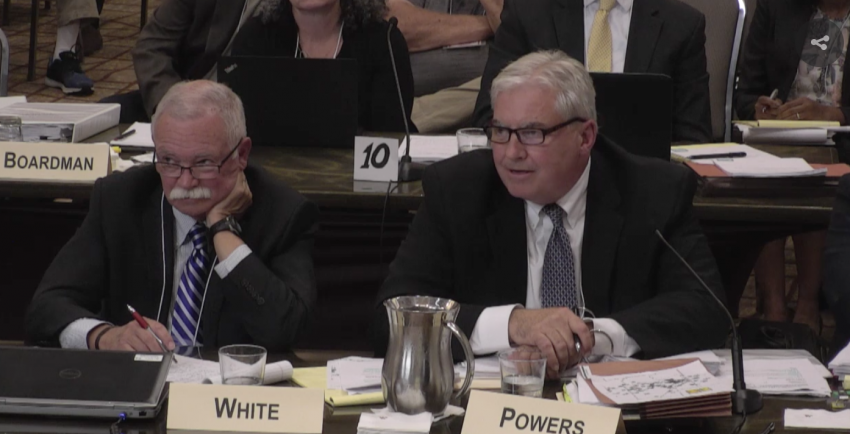 Tribes and other anti-pipeline advocates say Big Money may have kept Nebraska’s public service commission from hearing the whole story.

“As Native Americans, our rights are always pushed to the side."

More than a day ahead of schedule, the Nebraska Public Service Commission (PSC) hearing on the Keystone XL pipeline was called to a close Thursday in downtown Lincoln. The landowners, tribes and environmentalists opposed to the massive infrastructure project, though, say the commission didn’t get the full story.

By order of the state law that allowed for the PSC hearings to take place, all parties were barred from talking about pipeline safety, including the risk of leaks and spills. Also off the table for discussion were points about the necessity of the pipeline, eminent domain issues and negotiations between TransCanada and landowners along the route.

Brian Jorde of Domina Law Group is one of the attorneys representing landowners in this week’s hearing, and he has been working with landowners to fight Keystone for the last several years. He says there’s a relatively simple reason why the terms of the legislative statutes—and the hearing, by extension—have been so favorable to the company: money. TransCanada is a massive lobbying force in the state, and anti-pipeline advocates suspect they played a heavy hand in setting the terms of the hearing. A TransCanada subsidiary donated $20,000 to the Nebraska Republican Party in February, and the company has spent a total of $925,000 on lobbying in the state over the last five years.

“The reality is that TransCanada and its lobbyists had a hand in drafting those laws…It’s unfortunate that the state of Nebraska can’t consider one of the most foreseeable problems when evaluating whether or not the route is in its proper location, if there is any,” Jorde said of potential leaks.

Given the preponderance of pipeline malfunctions, the exclusion of any discussion of such dangers seems like an especially odd move. In 2012, ProPublica found that the United States’ 2.5 million miles of oil and natural gas pipelines experience hundreds of leaks and ruptures each year, in some cases involving serious injury and even death. Another operational Keystone pipeline—of which Keystone XL would be an extension—leaked some 17,000 gallons of oil into South Dakota in the spring of 2016, just after water protectors founded the encampment at Standing Rock. The project at the heart of that encampment—the Dakota Access Pipeline, plus a feeder line into it—ruptured in two locations even before it started shipping oil, unleashing more than 100 gallons of oil into North Dakota.

“It’s like we’ve all got lottery numbers,” says retired teacher Art Tanderup, who lives with his wife, Helen, on their farm along the pipeline’s proposed route. “When is our lottery number going to come up? It may never come up, but in this kind of situation the odds are great that somebody in Nebraska is going to have a severe leak a few years after they put that in. It’s not good if it happens any place in Nebraska, but especially if it happens over our most precious water supply in our most porous soil,” he said, referencing the Ogallala Aquifer—the country’s largest—and the fact that Nebraska’s sandy soil would be particularly vulnerable to absorbing spilled oil. “That would be a total disaster.”

Jorde also said that the commission’s prohibition on considering arguments about easements—rights to land on which the pipeline would be built—presented serious challenges to giving the PSC a holistic view of the project. “All a route is is a string of connected easements,” he argued. “If we can’t talk about the easements, we can’t really have an intelligent conversation about the route.”

Because the scope of the hearing was so narrow, several lines of testimony were excluded from the thick stack of documentation the PSC will be considering over the coming weeks.

“We’re two separate, sovereign nations,” says Jason Cooke, an elected chairman of the Yankton Sioux tribe of Nebraska who took the stand on Wednesday. “They said we’re ‘common,’ ” he added, referencing the PSC’s assertion that his and the Ponca tribe have common interests regarding Keystone XL. “Are we common because of our color?”

In the hearing’s final minutes, former Lancaster County Judge Karen Flowers, who presided over the hearings, debated with lawyers for each tribe about how many pages each would be allotted for their written closing arguments, to be submitted in mid-September. While TransCanada, NGOs and landowners can write 50 pages each, the Ponca and Yankton Sioux were required to split the 50 pages among them.

Lawyers for tribal nations were also only allowed to collect testimony and call witnesses that discussed cultural resources, or sites of sacred or historical importance.

“The idea that tribes only have cultural interests is ridiculous,” Brad Jolly, attorney for the Ponca tribe, told In These Times. “Obviously the tribe shares the same interest as everybody else: environmentally, socially, economically—everything. There’s a due process problem there. The tribe has recognizable rights of self-government…we see that and several other things as violations of due process.”

Perkins stated that his employees would be subject to drug tests in his testimony to the PSC, though he admitted on the stand that TransCanada has not yet met with police departments along the route where they would be working about how to handle the enforcement of drug-related or other offenses. He also stated that the company doesn’t preclude workers who are convicted sexual offenders, demurring about whether the pipeline developer would enforce federal laws requiring such offenders to file in the Nebraska state registry.

The man-camps that sprung up in North Dakota during the oil boom there were notorious for bringing high levels of sexual assault and domestic violence, and at one point the state had the highest ratio of single young men to single young women, according to The New York Times.

Cooke said his tribe is deeply concerned about the impact of similar dynamics on the tribe-owned Fort Randall Casino & Hotel, one of few places to drink along the sparsely populated border between Nebraska and South Dakota where Keystone XL would cross. “These guys from the man camp are going to come to the casino. They say they won’t but they will. And they’re not going to come to gamble,” a major source of revenue for indigenous-owned casinos. “They’re going to come to drink and prey on our women and children,” he said.

For tribes, adding potentially thousands of new, non-native residents to areas near reservations creates a particular challenge. Like other tribes, the Yankton Sioux don’t have either a memorandum of understanding with local police departments, or a program for cross-deputization of law enforcement officers inside and outside of the reservation.

Among the biggest concerns for the Yankton Sioux and several other tribes is the danger a spill could pose to their water supplies. “Our land that we farmed barely makes enough for our people,” he said. “Water is our number one asset on our reservation. If it’s contaminated from upstream, what are we going to do? Are we going to have to start buying water?”

And even within the cultural resources framework that the Ponca and Yankton Sioux were permitted to testify about, arguments about spills are all but unavoidable. Jolly, who’s spent his career as a tribal rights attorney, recalled legal proceedings several years ago to remove underground septic tanks on reservations. “The process was terrible because it’s not just removing the tank. The problem is they all leaked,” he said. “You have to dig up every bit of that soil and take it away. You can’t wash it. You can’t clean it. It’s done. You do that with a cultural resource and it’s gone. It’s not just a matter of bringing in new dirt.” As he had pointed out during the hearing, the route TransCanada has applied for—and that could be vulnerable to a spill—butts up against the Ponca Trail of Tears, along which several members of the tribe died while being forcibly relocated to Oklahoma in 1877.

Landowners were quick to criticize how tribes were siloed during the proceedings. “Their voice was stifled,” Tanderup told In These Times shortly after the hearing concluded. “I feel so terrible the way the tribes have been treated here. We stand behind them … they were severely mistreated, as they’ve been mistreated for generations. It’s something huge companies think they can do, is continue to mistreat people.”

On the legal end, the PSC will now have until November 23rd to make a final decision, before which time attorneys from each team will submit final briefings to the commission. Whatever they decide, appeals are expected from the losing parties. In the case of anti-pipeline forces, those appeals will take place inside and outside the legal system. At a press conference just after the hearing was adjourned, Bold Alliance founder and Nebraska Democratic Party chair Jane Kleeb pledged civil disobedience should the PSC rule in TransCanada’s favor: “Standing Rock was a dress rehearsal compared to what this will be. We are not going to let an inch of foreign steel touch Nebraska soil.”

Asked what’s next, Cooke had a straightforward answer: “Keep fighting,” he said. “As Native Americans, our rights are always pushed to the side. I think that’s what makes us strong, though. We never give up.”