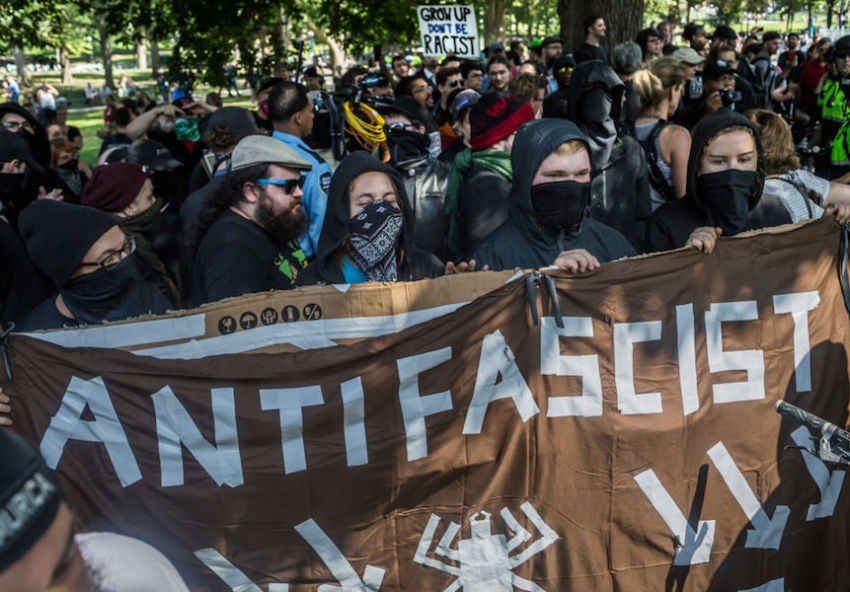 We’ll Beat the Fascists With Ideas, Not Fists

As bad as the far Right is, shutting them down is poor strategy.

The successes of Bernie Sanders and Jeremy Corbyn show that even amid fierce right-wing opposition, a clearly articulated left vision can win people over on its own merits.

This piece is part of a debate package written for In These Times' September issue. The print version went to press before the recent white-supremacist violence in Charlottesville, Va.

This article is a response to “Why I Helped Shut the 'Alt-Right' Down,” by Mukund Rathi, and “Don’t Give Fascism an Inch​,” by Natasha Lennard.

Natasha may be right that highly contested terms like “free speech” and “rights” can be unproductive in this discussion, so let’s frame the question without reference to either: Should leftists support the shutting down of right-wing speakers on college campuses, in particular through disruptive protest? For several reasons, I would answer no.

But this perspective does not seriously evaluate the tactical question. In theory, stopping individual racists from speaking inhibits the spread of racism. In practice, exactly the opposite is true. Yiannopoulos might have dwelt in permanent obscurity had the Left simply ignored him. Instead, attempts to shut down his events helped turn him into a national figure. The Right argues that leftists suppress speech because we fear having to defend our ideas. Shutting down events makes it seem as if they are right, giving them a powerful way to further their persecution narrative and win supporters. For the Left, this approach has been a public relations disaster.

Next, the trouble with supporting any amount of “no-platforming” is that nearly every justification for the tactic also justifies massive additional curtailments. After all, if Yiannopoulos and Murray should be kept off campus, surely any member of the mass-murdering Bush administration should, too. But then what about Democratic politicians who voted for the Iraq War, or who support our viciously racist criminal justice system? If the rule is “no platforms for racists,” and nearly everyone is racist to one degree or another, universities swiftly cease to be places of meaningful dialogue.

This “where do you stop” question isn’t merely academic. In 2015, Natasha’s principle that “transphobic hate speech will be confronted and besieged” was exactly why Cardiff University students petitioned to ban pioneering anarchist feminist Germaine Greer from speaking. Natasha says there “cannot be a fixed rule” as to what should be allowed, and that “we wish we could shut down [more].” The question never dealt with is: If there is no actual rule or principle in place, what will determine who is too problematic to speak? People have vastly differing conceptions of who the bigots are, and often the preferences of those with administrative power will govern. As Mukund acknowledges, pro-Palestinian activists are generally the first to be deemed racists. Establishing a universal norm that university speakers should be free from both administrative and private interference helps protect left-wing dissent.

Finally, one popular notion on the Left has it that allowing right-wing speakers on campus “legitimizes” them and subscribes to the illusion that racists can be vanquished through public debate. The fear here is that if racists were permitted to be part of the public discourse, they would win. I have far more confidence in the persuasive power of left-wing ideas. The successes of Bernie Sanders and Jeremy Corbyn show that even amid fierce right-wing opposition, a clearly articulated left vision can win people over on its own merits.

Natasha says that racial justice is not “proved” but “fought for.” I agree, but the most important way to fight for an idea is to convince people to adopt it. And the purpose of public debate is not to speak truth to “power,” but to speak truth to people, showing the audience (rather than the opponent) why they should join you.

The appeal of shutting down right-wingers is easy to see; after all, nobody should want to see these speakers’ poisonous doctrines spread. But in the short term it’s counterproductive, and in the long term it’s suicidal. Establishing a principle that a “mob veto” should govern who gets to speak will only empower those most inclined to form mobs—i.e., the fascists. The Left will lose in a battle of physical force because it has the smallest force, but will win at a battle of ideas because it has the best ideas.

This piece is part of a debate package written for In These Times' September issue. The print version went to press before the recent white-supremacist violence in Charlottesville, Va.

This article is a response to “Why I Helped Shut the 'Alt-Right' Down,” by Mukund Rathi, and “Don’t Give Fascism an Inch​,” by Natasha Lennard.

Nathan Robinson is the editor of Current Affairs magazine and the author of Trump: Anatomy of a Monstrosity.