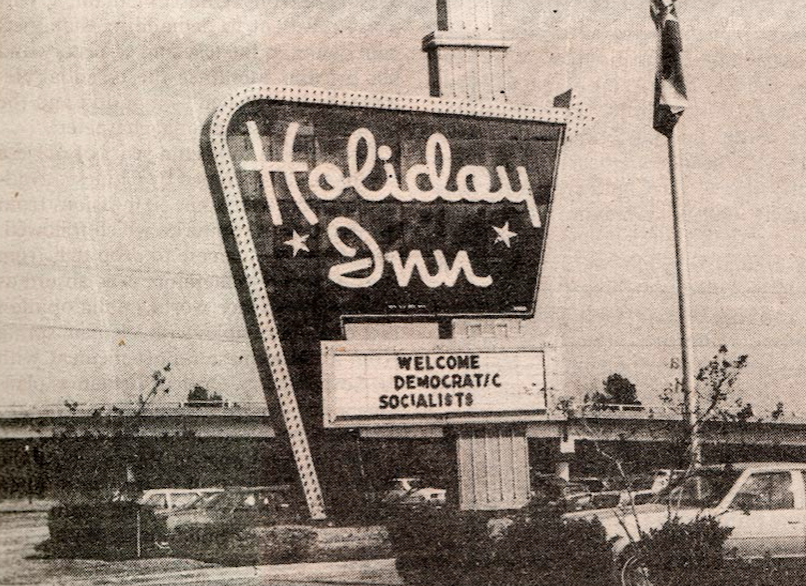 The Feb. 28, 1979, issue of In These Times featured John Judis' report from the Democratic Socialist Organizing Committee (DSOC) convention in Houston, along with this photograph.

Not My First Democratic Socialist Convention

At age 23, I attended the 1979 Democratic Socialist Organizing Committee (DSOC, pronounced dee-sock) convention as an “at-large” delegate from Columbia, Mo. Memorable moments included founder Michael Harrington’s keynote speech in which he criticized liberals for adhering “to the New Deal strategy of leaving the corporate infrastructure alone and creating an economic environment in which it can function”; the vocal presence of Harry Britt, the gay San Francisco Supervisor named to fill the seat of Harvey Milk, who had been assassinated the previous November; and the gradual realization that besides us socialists (150 delegates and 100 observers), the only other people with rooms at the Houston airport Holiday Inn were sex workers.

Reporting on the convention, In These Times’ John Judis noted that at a time when the Right was “setting the terms of public debate,” the six-year-old DSOC, with 3,000 members, was showing “surprising signs of vitality.”

As a delegate at the 1982 convention in Detroit, I witnessed DSOC merge with the New American Movement to found the Democratic Socialists of America (DSA). Democratic socialism’s time had come, or so I thought. But as the decades rolled on, I wondered if I had been wearing pink-colored glasses.

Then came Bernie Sanders and a day this summer—Saturday, August 5—when I sat at the In These Times table selling subscriptions to the 700 delegates, most of them under 30, at the biennial convention of DSA, which now boasts more than 25,000 members, with chapters or branches in 49 states.

That evening, In These Times and Jacobin co-sponsored the convention after-party at our offices. As scores of socialist millennials overflowed onto the Milwaukee Avenue sidewalk, I stood at In These Times’ front door enforcing Chicago’s open container ordinance. The next morning, I awoke to read about the convention, our party and my Marx-inspired beverage donation signs in the Washington Post. Political revolution seems to be back on the agenda.