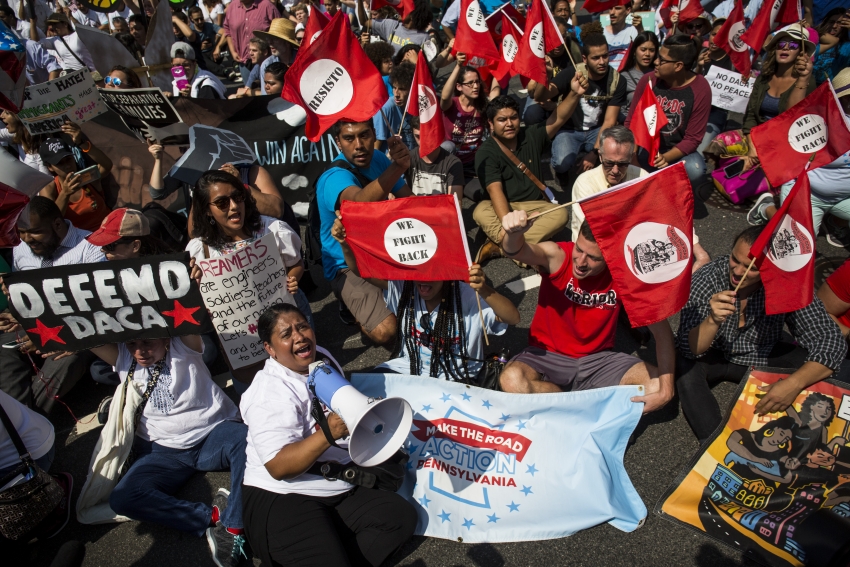 There is simply no going back for the youth at the frontlines of the crisis. (Zach Gibson/Getty Images)

DACA Was Won By a Vibrant Movement of Immigrant Youth. Now, That Movement Will Rally to Defend It.

By ending the DACA program, Trump is awakening the same nationwide movement that won the protections for young immigrants in the first place.

Despite all its inherent uncertainties, DACA is a reflection of both what is achievable and of the long struggle ahead.

While President Trump rolls out plans for building a new border wall and vows to reconstruct storm-ravaged Houston, he is simultaneously uprooting the lives of countless young immigrants.

Trump has decided to kill the Deferred Action for Childhood Arrivals (DACA) program, the temporary reprieve granted under Obama that for the past five years has enabled nearly 800,000 immigrant youth to work and remain in the country legally. On Tuesday, the administration announced that the program would be terminated by next March, giving Congress a six-month grace period to legislate a permanent fix. Meanwhile, those about to lose their thin shield from deportation are now caught in legal limbo as they face the gradual expiration of their immigration status. After hedging for months around the future of DACA, Trump’s decision to go forward with the repeal is partially a response to a threat by 10 states to sue the administration if it did not move to end the program by today.

Trump’s decision to eliminate DACA adds to a slew of anti-immigrant policies his administration has embraced, from the expanded border wall to stepped up ICE raids to the Muslim travel ban. But losing DACA would be uniquely damaging for immigrant communities because it would directly affect hundreds of thousands of young people already living, working, attending school and raising families in the United States. The campaign to preserve DACA, a status that, while temporary, allowed many to work legally and attend college for the first time, has fueled snowballing nationwide protests—branded with the slogan “#Heretostay”—as well as vocal opposition from progressive policymakers and business groups. As one of the most sympathetic faces of the immigrant rights movement, the “DACAmented” community have rallied schools, employers and civic institutions across the country who have come to embrace them, despite the deep dysfunction of the American immigration system.

At a rally to defend DACA on Tuesday, activists with the advocacy network Movimiento Cosecha announced that the DACAmented community was unbowed. Cosecha organizer Thais Marques acknowledged an impending “economic crisis in our community,” but vowed to redouble the group’s nonviolent resistance. Tens of thousands of jobs may soon be endangered, but the youth say they will keep working, getting an education and organizing to protect the rights of all immigrants nationwide. “We are angry, for all the plans that DACA recipients had that now seem impossible.” Marques said in a statement. “But we are also strong. Our strength and resilience have never depended on a work permit.”

Beyond the real-life impacts of the repeal, the optics are part of what makes the debate so complex: Though only a small fraction of the total 11 million undocumented immigrant population in the United States, the DACA recipients represent a sympathetic subset, as eligibility is premised on having long-established residency and a squeaky clean record.

According to surveys of DACA recipients from 2014, “almost two-thirds reported getting a higher-paying job. Six percent of survey respondents started a business, 54 percent bought a car, and 60 percent purchased a home.”

The reprieve also allowed young people to fully “come out of the shadows” as immigrant rights advocates. Many of the DACAmented activists had been pushing for expanded reforms toward the end of the Obama administration, including the extension of DACA protection for undocumented parents. Trump has now stifled those earlier hopes, while galvanizing his far-right base by aggressively dismantling Obama's moderate reforms.

The six-month timeframe for Congress to intervene suggests that Trump is aiming to soften the political blow of the decision. But it will hardly insulate him from mass protests and legal challenges from state officials, as advocates press for sanctuary for all migrants nationwide.

Although Trump’s decision will hit communities nationwide, in the wake of unprecedented rainfall and flooding, immigrant youth in Texas now face a triple-blow: losing DACA, Harvey's devastation and Texas’s new law outlawing “sanctuary cities” that offer extra protections to undocumented immigrants, which is currently being challenged in court. Last week, youth activists with United We Dream declared: “We call on Governor Greg Abbott, Attorney General Ken Paxton, and all Texas politicians of conscience, that they publicly ensure that this moment will not be used to hunt down and persecute immigrant families in need of refuge and shelter.”

Trump has turned his back on their appeal, but the call for accountability and compassion wasn’t lost on the millions who support the DACA community's economic and social contributions.

According to Seattle-based lawyer Jorge Barón with the Northwest Immigrant Rights Project, which works with DACA recipients, the legal threat is serious. But the fate of DACA is still going to come down to whether Congress acts to preserve the program’s protections. And the threats facing immigrant communities will depend on the severity of enforcement actions against current DACA recipients, and, ultimately, where people live, as some states have actually expanded on DACA protections with measures like “sanctuary cities,” while others have actively cooperated with ICE agents.

“There is undoubtedly a sense of anxiety among the DACA recipients and their families with whom I have talked in the past few weeks. However, I don't see people making big changes yet,” Barón said. “There is also a strong sense that the community and the undocumented community members themselves can push back against this decision.”

However the politics unfold, in many ways, the program’s future may also lie with the youth themselves, if they can leverage the power that DACA has enabled them to seize. DACA status has evolved into more than a mere legal designation. Despite all its inherent uncertainties, DACA is a reflection of both what is achievable and of the long struggle ahead.

“This was a victory that we made,” said United We Dream organizer Josue de Luna Navarro, who has lived in the United States since age 9 and currently attends college in New Mexico. “It wasn’t just an act of grace from Obama’s administration. It was our own energy that we put into this, our own strategies, and our own communities working up to this moment. And we have to protect it and have that message that we’re here to stay.”

There is simply no going back for the youth at the frontlines of the crisis. By going against a growing consensus over what is fair and just for America’s undocumented youth, Trump may well find himself playing with an empty hand, while the movement in the streets that helped win DACA in the first place continues to mobilize for migrant justice.