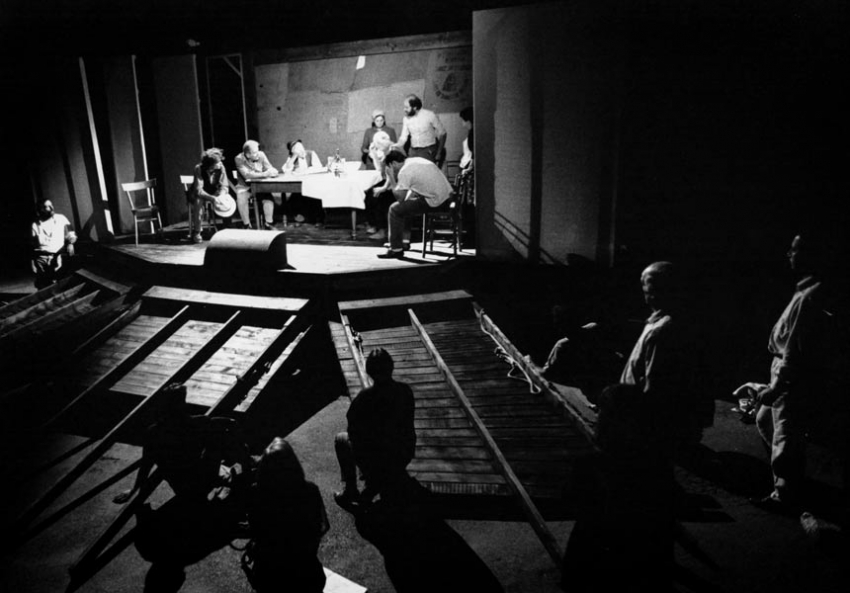 Residents of the small Tuscan village of Monticchiello prepare an annual play about the previous year of town life. (Courtesy of Grasshopper Films)

The town is aging and shrinking, and by 2016 the global economic crisis had sucked away the play’s sponsorship.

The new documentary Spettacolo has such a sumptuously rich and delicious subject on its hands, it’s almost as if the film coalesced organically out of sheer fabulousness. In the absurdly adorable, medieval Tuscan village of Monticchiello, the entire village of 136 stages a unique, very personal play about itself, every year. For 50 years now, nearly all of the citizens participate, or have participated, often playing themselves and mustering the text of the play from what happened in their lives over the last 12 months.

The Monticchiello “autodramas” have explored the village’s experience of changing sexual and social norms, economic travails, Italy’s bloody Years of Lead, modernization and so on. It all began in 1967, as a way for the villagers who had been partisans fighting Fascists during WWII to memorialize the experience—and Spettacolo (“spectacle” in Italian) features black-and-white footage from the production, fuzzy enough to be mistaken for footage from the war.

There were few in the audience then; the play began as something the villagers did for themselves. In the years since, the village’s amateur production has become famous in Italy and has garnered corporate sponsorship, national reviews and a healthy tourist trade.

That is, until recently—the town is aging and shrinking, and by 2016 the global economic crisis had sucked away the play’s sponsorship. Directors Jeff Malmberg and Chris Shellen’s movie is wistful and besotted about the village, but also infected with an autumnal sense of doubt, as everyone worries that Monticchiello’s Teatro Povero (“Poor Theater”) won’t survive in the 21st century.

The film is essentially a portrait of an Old World enclave stubbornly resisting post-industrialization, whose inhabitants have come to define themselves by their annual creation. Malmberg and Shellen, Americans whose previous film was the remarkable outsider-art doc Marwencol (2010), are clearly in love with the whole dynamic, and as a result the film is likely to seduce more than a few viewers into buying a plane ticket. Certainly, it will be difficult for many American viewers to resist not only the vacation porn, but the vision of a village so intimately bonded by its years of collective self-expression that it’s nearly a social ideal, a community that found the secret of togetherness.

The central figure is Monticchiello’s suave, supercool resident artiste, Andrea Cresti, the play’s organizer and director. A superb graphic artist and watercolorist, Cresti is the latest in a line of impresarios, and his approach is patient, tolerant and quietly passionate. (Little is said, amidst the talk of economic downturns, of how Cresti and others make their livings; ticket revenue for the Poor Theater play may be a primary source of income for all concerned, sustaining the town in more ways than one.)

The six-month schedule begins with town meetings in the winter, where everyone attending contributes ideas, aggregated by Cresti into drafts of a finished script. Attacking commercial modernity is a recurrent theme: One earlier play transformed every person in attendance into a shopping consumer, buying a prized canned product no one cared to define—until the cans were opened, and it was Tuscan soil being bought and sold. In another recent year, the town was split over allowing housing development or not, and the resulting performance (which we see a bit of on video) looks like a Samuel Beckett play, with the villagers’ disembodied heads arguing like lost souls about whether the play they’re in should be about the development or not.

In the end, though we’ve glimpsed rehearsals, we do not see the play—presumably, we would’ve had to buy tickets. Afterward, we watch the serene Cresti calmly eating gelato in a café, wryly watching tourists absorbed not with Tuscany or gelato, but with their phones. The sense of what we’re losing as we plow into a techno-commercial future couldn’t be clearer.