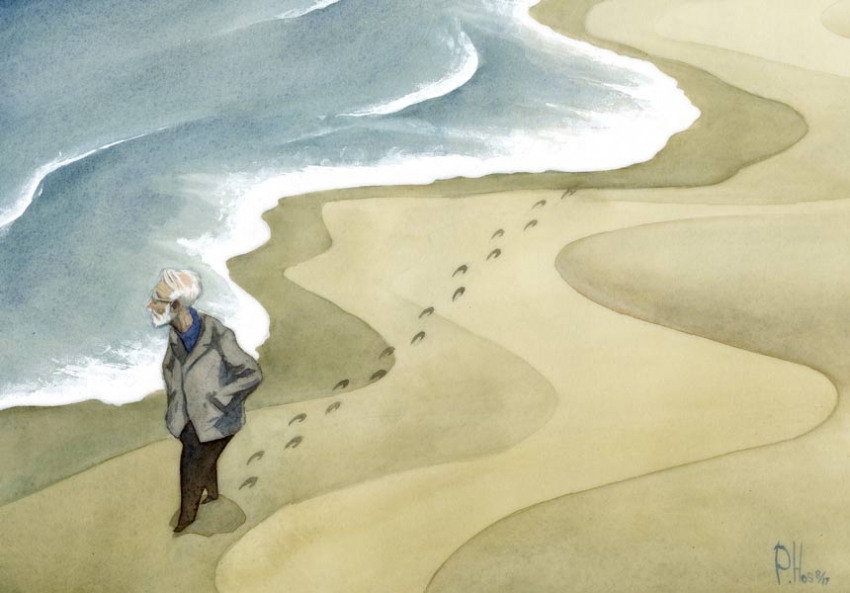 On funerals and socialist revivals.

In this country and yours, there are new, optimistic, socialist movements being led by men who are both grandfathers.

I’m beginning to feel a survivor’s shame as my generation of friends and relations are regularly picked off. We old relics sit, stand, even kneel (this, with great difficulty) in churches and theatres and lecture halls while our contemporaries are praised to the skies in ways some of them might have welcomed in their lifetime. As one of a diminishing band, I’m sometimes asked to speak at my old friends’ funerals. Quarrels, failures, drunkenness: all is forgotten as we remember their charm, their virtues, their achievements. Arrangements for the occasion will have been in the hands of the next generation, the ones of 40, 50, 60, who are beginning to feel rather old themselves. They’re not as good at the new technology as their children are, but nowadays there may, nonetheless, be programmes full of poems and photographs, rapidly assembled and glossily printed.

As well as funerals there may be memorial occasions, where too many people will have their say, and there’ll be a hobbled rush to the toilets when they’re finally over. Some of us old egotists may wonder what on earth will be said about us when it’s our turn.

Funerals are often billed these days as celebrations of a life, offering a tentative promise that family, friends, achievements and so on will somehow manage to keep that life going. But the emptiness is real for many of us, and I am apt to feel on these occasions something like a slipping away of a generational agreement about what it was all like back then. Are we making it all up? Fewer and fewer people are left to confirm or counter our accounts of the past.

There’s no one left, for example, who remembers the horrors of Passchendaele in 1917. The centenary ceremonies, with the Belgian and British royals in their best clothes reading their mournful eulogies against the apparently infinite rows of identical white graves, were respectful and dignified. But while commemoration is better than nothing, it is a good deal less powerful than the vivid particularity that memories provide.

The film Dunkirk is a brave attempt to recreate the confusion and terror of the retreat from northern France in 1940, and is timely allusion to Britain’s chauvinism then and now. There are still people who remember it all, and most of them will have been, as I was, a child at the time. My memories of that moment and of the whole war are, above all, of a confusion that is caught by the film, as my elders tried to make sense of clipped and doctored news bulletins on the radio, while protecting us children from the horror of what was going on.

We all become repositories of a version of the past, though with every death something of that is lost. Historians, novelists and filmmakers work to convey their account to a generation that may have other things on its mind.

I’m not sure that we’re very popular, we old funeral goers. We cost a lot. Much of the social care and National Health Service budgets are spent keeping us alive. More is spent on state pensions for the retired than on other benefits. Sheer longevity means that we’re likely to develop diabetes or cancer or heart disease or dementia, or all four, and so absorb unconscionable amounts of other people’s time and money. We are constantly advised to exercise our brains and our bodies and eat less, and too many of us don’t do as we’re told. The recent news that the rise in life expectancy has actually slowed down was greeted with lukewarm lamentation. It is a characteristic paradox, however, that the old continue to lobby to decide for themselves how and when they’ll die—a request that is regularly refused on the grounds that it would expose the vulnerable to the murderous intentions of their nearest and dearest. Perhaps those younger relations are afraid they’d be tempted and simply wish to circumvent temptation.

We are thought to be a drag on progress and change, and to be nostalgic for a past coloured rosily by the fact that we were young in it. It’s assumed that the old vote more conservatively than the young.

Yet in this country and yours, there are new, optimistic, socialist movements being led by men who are both grandfathers. I don’t need to tell you about Bernie Sanders, who is 76. Jeremy Corbyn is only 68, but still. His election to the leadership of the Labour Party in 2015, and again in 2016, was greeted by most Labour members of parliament—and almost everyone else—as hopelessly backwardlooking, weakly reminiscent of the old Left of the 1980s, when politicians like Michael Foot and Tony Benn warmed the cockles of some hearts (mine, certainly) but were never expected to win elections, manage economies and thrive in a modern, global world. For a decade or two some of my generation have criticised the young for not voting, and now, suddenly, the young of both our countries are not only involving themselves in politics, but doing so in numbers that could radically change things.

Jeremy Corbyn has heard the frustrations of the young—their student debt, when college used to be free; the near impossibility of buying a house— and responded to them. It is no longer out of the question that Corbyn could win an election.

I don’t remember a period that was not thought a difficult time by people of all ages, and we are undoubtedly living in difficult times today. Yet something is stirring, an energy and some imagining, that combines what the old bring with them and what the young are looking for.

The old and the young must join forces. We all want and need time, support, resources and freedom to do the things and know the things that matter to us.

A marvelous exhibition in the British Museum featured the work of the Japanese artist Hokusai, who lived to be almost 90, and whose last known words were, “If heaven will afford me five more years of life, then I’ll manage to become a true artist.” We should all hold out for as much time as we can get. But that can’t be at the expense of the young.