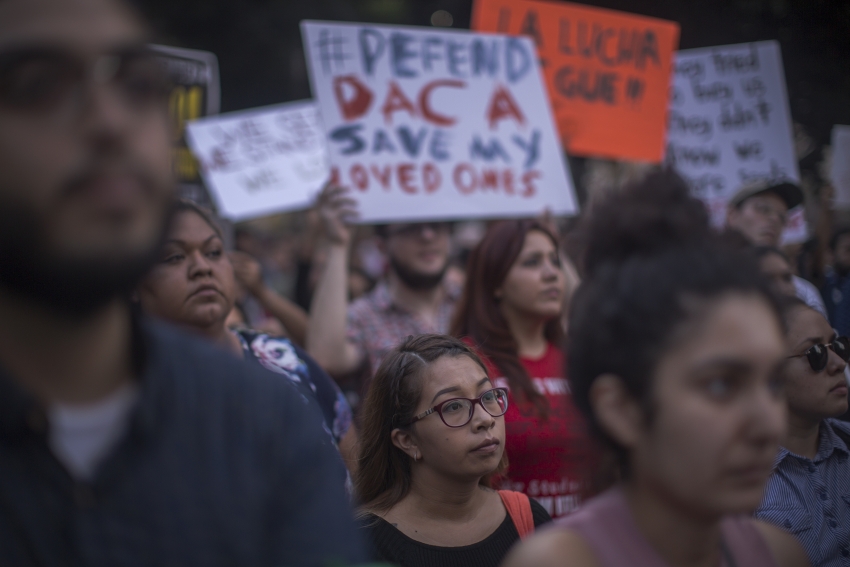 Immigrants and supporters rally and march in opposition to the President Trump order to end DACA, on September 5, 2017 in Los Angeles. (Photo by David McNew/Getty Images)

The Attack on DACA Is About Racism. Period.

A conversation with the young people on the front lines of Trump’s crackdown.

On September 5, the administration of President Donald Trump announced a “phase-out” of the Deferred Action for Childhood Arrivals (DACA) program for immigrant youth. This decision leaves hundreds of thousands of young people vulnerable to deportation—young people who voluntarily gave the government personal information about themselves in order to gain protections in the first place. In response, emergency protest rallies swept the country. In Kingston, N.Y., outside of the office of newly-elected Republican Congressman John Faso, I spoke with two immigrant organizers about the decision to revoke DACA and the struggle for justice for immigrants.

Sarah Jaffe: So we're outside of Congressman John Faso's office at a rally for DACA right now on Tuesday, September 5. Tell us your story.

Alan: I came to this country very young. More than two decades ago, my family brought us here. I started kindergarten all the way to high school. Everything was working fine: I didn't worry about my status or anything like that. I was young. It wasn't until I was 16, when I wanted to get a license just like everyone else, that it hit me: I didn't have papers. I let that slide, thinking it was okay, I could live without a license.

Then when I was trying to go to college, my counselor was telling me to fill out the Free Application for Federal Student Aid (FAFSA). But then I found out that, for the FAFSA, you need Social Security number and a legal primary residence. I still went to college, but it was hard, and it got expensive. It was good that New York had in-state tuition—that's a great thing, but I needed to bring my parents' taxes, passport and all these type of IDs just to qualify. It was embarrassing for me when everybody else showed their licenses, and I had to show a passport. People found out that I was undocumented.

My major is engineering, and I'm still continuing in school. I'm an industrial technician with a very good job, and I'm afraid of losing it. I'm happy now, I'm content, but you now that DACA's going to end pretty soon, I am worried. What if, when it ends, my job asks me for my papers and I can't show them anything? I would lose a pretty good base salary and then go back to hiding. I don't want to do that anymore.

There's a lot of things going on, one of them is racism. I can't see it any other way. They keep saying, “America First!” They keep saying that, but it's just racism towards us. We are the minority now and we're going to become the majority eventually. They're afraid of that. My parents are not criminals. They're not.

Sarah: What can the state of New York do if the federal government is going to eliminate DACA? Is there something you would like to see the state government do?

Alan: Yes. Take the “Temporary Visitor” mark off our license, that shows the cops that we are temporary visitors. If that expires, we can't renew our licenses. If Gov. Cuomo was in front of me, I would tell him to take the “temporary visitor” mark off. If we're driving and we're pulled over, we could lose a lot of stuff with that. And that's something that I want the state to do.

And protect our information. Even though the federal government has our information, just protect us at your state by not taking away our license when it expires.

Sarah: What would you say to Rep. Faso if he popped his head out of the office and came to talk to people?

Alan: Listen. I would definitely tell him to listen. Read about DACA, read the benefits, don't listen to Fox News. I've seen that, tried to comprehend it. I would tell him just listen to us, help us out. There's a lot of immigrants in this community, in the mid-Hudson Valley. Help them out.

Sarah: Tell us how you got involved with Nobody Leaves Mid-Hudson?

Alan: I've known the main organizer, Ignacio, for quite some time. I've done work with Rural Migrant Ministry on advocacy for farmworkers, so I've been in this type of group before. Ignacio brought me in and said, “Listen, you're a DACA recipient. I need your voice—not just for Kingston, but for many.” That's what I'm doing here.

It's a great organization. He tells me, “I'm there for you but I also want you to help yourself. I'm going to be right there backing up for you.” If people could donate to it, it's a great cause. Membership is not that much: It's $25, you would greatly benefit from it.

Sarah: How can people find out more about it?

Sarah: Anything else you want people to know?

Sarah: We're outside of John Faso's office, you were just speaking and sharing your story.

Renee: I am what happens without DACA. I didn't get DACA, because I was two months too old for it, and I missed out on being able to go to school. I don't have a work visa, and I haven't been able to work for a year. I actually would be on disability, for various reasons, but I can't claim anything that I've paid into since I was 16 because of my status.

Sarah: One of the things I wanted to ask about is that a thing that often happens is that different groups of immigrants get played off against each other as “good” and “bad.” I wonder if you could speak to that.

Renee: Oh, I hate that. And I am part of a forgotten demographic of immigrants. Black immigrants tend to be completely left out of the conversation. It's not at all right to play any of us against each other, because we're literally all in the same position. There are different benefits with the immigration system depending on where you come from, but that's not our fault—that's the American immigration system. As immigrants, we need to come together as our own bloc of people and say, “We're here, we are some of the biggest contributors to U.S. society. We get the job done.”

We need to come together and make our voices heard.

Sarah: Talk about how you got involved with the different organizing you do, with Community Voices Heard.

Renee: It started with going to the Millions March in NYC as a protester. I went to the Women's March, and it just started with this feeling that now is the time to kind of take control of our destiny—it is time to make our voices heard.

I would rather do anything else, but at this moment in history I have to speak out or I will fall by the wayside.

Sarah: In New York, what can be done on the local level if the federal government is in Trump's hands?

Renee: I live in Poughkeepsie, and I helped get safe city legislation passed in my city just by showing up to Common Council meetings. I met the mayor, befriended him on Facebook, talked to people I know locally and made sure that people know that I'm here. I put a human face on the issue.

Sarah: If John Faso's office were to actually come out and talk to you, what would you say to him?

Renee: I would say that it is cruel to dangle DACA in front of so many people's eyes and then snatch it away.

Sarah: What else do you want people to know?

Renee: I want people to know that we're just people. The strain of being undocumented for a really long time puts a lot of stress on you mentally. I am very high functioning, and I'm very outspoken, but I know that's because I'm a strong person. I speak for the people who can't speak for themselves. I just want people to know that we're here, and we aren't trying to take anything from you. We're trying to add to the whole melting pot.

Workers Are Essential, CEOs Are Not