The Attack on DACA Is About Racism. Period.

A conversation with the young people on the front lines of Trump’s crackdown. 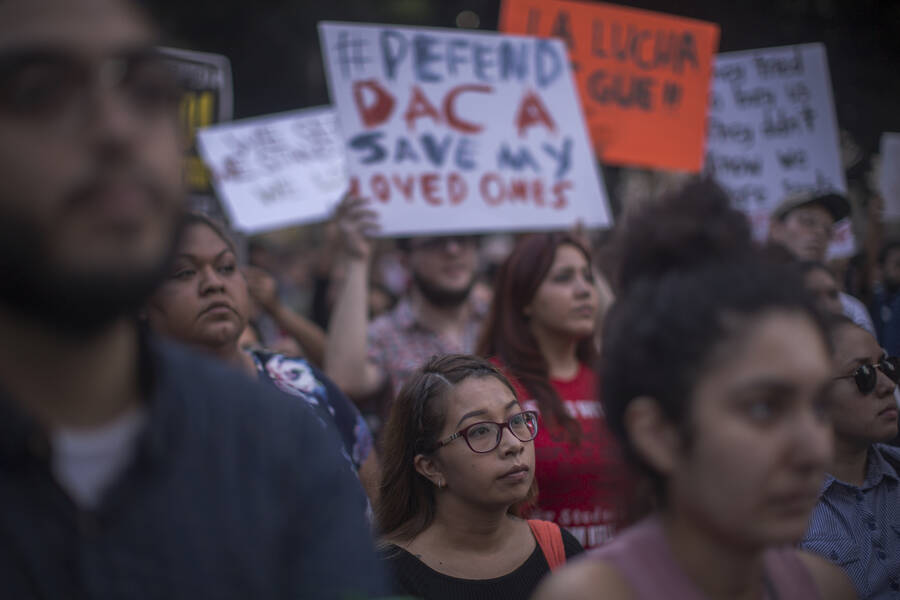 Immigrants and supporters rally and march in opposition to the President Trump order to end DACA, on September 5, 2017 in Los Angeles. (Photo by David McNew/Getty Images)

On Sep­tem­ber 5, the admin­is­tra­tion of Pres­i­dent Don­ald Trump announced a ​“phase-out” of the Deferred Action for Child­hood Arrivals (DACA) pro­gram for immi­grant youth. This deci­sion leaves hun­dreds of thou­sands of young peo­ple vul­ner­a­ble to depor­ta­tion — young peo­ple who vol­un­tar­i­ly gave the gov­ern­ment per­son­al infor­ma­tion about them­selves in order to gain pro­tec­tions in the first place. In response, emer­gency protest ral­lies swept the coun­try. In Kingston, N.Y., out­side of the office of new­ly-elect­ed Repub­li­can Con­gress­man John Faso, I spoke with two immi­grant orga­niz­ers about the deci­sion to revoke DACA and the strug­gle for jus­tice for immigrants.

Sarah Jaffe: So we’re out­side of Con­gress­man John Faso’s office at a ral­ly for DACA right now on Tues­day, Sep­tem­ber 5. Tell us your story.

Alan: I came to this coun­try very young. More than two decades ago, my fam­i­ly brought us here. I start­ed kinder­garten all the way to high school. Every­thing was work­ing fine: I did­n’t wor­ry about my sta­tus or any­thing like that. I was young. It was­n’t until I was 16, when I want­ed to get a license just like every­one else, that it hit me: I did­n’t have papers. I let that slide, think­ing it was okay, I could live with­out a license.

Then when I was try­ing to go to col­lege, my coun­selor was telling me to fill out the Free Appli­ca­tion for Fed­er­al Stu­dent Aid (FAF­SA). But then I found out that, for the FAF­SA, you need Social Secu­ri­ty num­ber and a legal pri­ma­ry res­i­dence. I still went to col­lege, but it was hard, and it got expen­sive. It was good that New York had in-state tuition — that’s a great thing, but I need­ed to bring my par­ents’ tax­es, pass­port and all these type of IDs just to qual­i­fy. It was embar­rass­ing for me when every­body else showed their licens­es, and I had to show a pass­port. Peo­ple found out that I was undocumented.

My major is engi­neer­ing, and I’m still con­tin­u­ing in school. I’m an indus­tri­al tech­ni­cian with a very good job, and I’m afraid of los­ing it. I’m hap­py now, I’m con­tent, but you now that DACA’s going to end pret­ty soon, I am wor­ried. What if, when it ends, my job asks me for my papers and I can’t show them any­thing? I would lose a pret­ty good base salary and then go back to hid­ing. I don’t want to do that anymore.

There’s a lot of things going on, one of them is racism. I can’t see it any oth­er way. They keep say­ing, ​“Amer­i­ca First!” They keep say­ing that, but it’s just racism towards us. We are the minor­i­ty now and we’re going to become the major­i­ty even­tu­al­ly. They’re afraid of that. My par­ents are not crim­i­nals. They’re not.

Sarah: What can the state of New York do if the fed­er­al gov­ern­ment is going to elim­i­nate DACA? Is there some­thing you would like to see the state gov­ern­ment do?

Sarah: What would you say to Rep. Faso if he popped his head out of the office and came to talk to people?

Alan: Lis­ten. I would def­i­nite­ly tell him to lis­ten. Read about DACA, read the ben­e­fits, don’t lis­ten to Fox News. I’ve seen that, tried to com­pre­hend it. I would tell him just lis­ten to us, help us out. There’s a lot of immi­grants in this com­mu­ni­ty, in the mid-Hud­son Val­ley. Help them out.

Sarah: Tell us how you got involved with Nobody Leaves Mid-Hud­son?

Alan: I’ve known the main orga­niz­er, Igna­cio, for quite some time. I’ve done work with Rur­al Migrant Min­istry on advo­ca­cy for farm­work­ers, so I’ve been in this type of group before. Igna­cio brought me in and said, ​“Lis­ten, you’re a DACA recip­i­ent. I need your voice — not just for Kingston, but for many.” That’s what I’m doing here.

It’s a great orga­ni­za­tion. He tells me, ​“I’m there for you but I also want you to help your­self. I’m going to be right there back­ing up for you.” If peo­ple could donate to it, it’s a great cause. Mem­ber­ship is not that much: It’s $25, you would great­ly ben­e­fit from it.

Sarah: How can peo­ple find out more about it?

Alan: Go to the web­site, NobodyLeavesMid​Hud​son​.com

Sarah: Any­thing else you want peo­ple to know?

Sarah: We’re out­side of John Faso’s office, you were just speak­ing and shar­ing your story.

Renee: I am what hap­pens with­out DACA. I did­n’t get DACA, because I was two months too old for it, and I missed out on being able to go to school. I don’t have a work visa, and I haven’t been able to work for a year. I actu­al­ly would be on dis­abil­i­ty, for var­i­ous rea­sons, but I can’t claim any­thing that I’ve paid into since I was 16 because of my status.

Sarah: One of the things I want­ed to ask about is that a thing that often hap­pens is that dif­fer­ent groups of immi­grants get played off against each oth­er as ​“good” and ​“bad.” I won­der if you could speak to that.

Renee: Oh, I hate that. And I am part of a for­got­ten demo­graph­ic of immi­grants. Black immi­grants tend to be com­plete­ly left out of the con­ver­sa­tion. It’s not at all right to play any of us against each oth­er, because we’re lit­er­al­ly all in the same posi­tion. There are dif­fer­ent ben­e­fits with the immi­gra­tion sys­tem depend­ing on where you come from, but that’s not our fault — that’s the Amer­i­can immi­gra­tion sys­tem. As immi­grants, we need to come togeth­er as our own bloc of peo­ple and say, ​“We’re here, we are some of the biggest con­trib­u­tors to U.S. soci­ety. We get the job done.”

We need to come togeth­er and make our voic­es heard.

Sarah: Talk about how you got involved with the dif­fer­ent orga­niz­ing you do, with Com­mu­ni­ty Voic­es Heard.

Renee: It start­ed with going to the Mil­lions March in NYC as a pro­test­er. I went to the Wom­en’s March, and it just start­ed with this feel­ing that now is the time to kind of take con­trol of our des­tiny — it is time to make our voic­es heard.

I would rather do any­thing else, but at this moment in his­to­ry I have to speak out or I will fall by the wayside.

Sarah: In New York, what can be done on the local lev­el if the fed­er­al gov­ern­ment is in Trump’s hands?

Renee: I live in Pough­keep­sie, and I helped get safe city leg­is­la­tion passed in my city just by show­ing up to Com­mon Coun­cil meet­ings. I met the may­or, befriend­ed him on Face­book, talked to peo­ple I know local­ly and made sure that peo­ple know that I’m here. I put a human face on the issue.

Sarah: If John Faso’s office were to actu­al­ly come out and talk to you, what would you say to him?

Renee: I would say that it is cru­el to dan­gle DACA in front of so many peo­ple’s eyes and then snatch it away.

Sarah: What else do you want peo­ple to know?

Renee: I want peo­ple to know that we’re just peo­ple. The strain of being undoc­u­ment­ed for a real­ly long time puts a lot of stress on you men­tal­ly. I am very high func­tion­ing, and I’m very out­spo­ken, but I know that’s because I’m a strong per­son. I speak for the peo­ple who can’t speak for them­selves. I just want peo­ple to know that we’re here, and we aren’t try­ing to take any­thing from you. We’re try­ing to add to the whole melt­ing pot.

Inter­views for Resis­tance is a project of Sarah Jaffe, with assis­tance from Lau­ra Feuille­bois and sup­port from the Nation Insti­tute. It is also avail­able as a pod­cast on iTunes. Not to be reprint­ed with­out permission.

Sarah Jaffe is a for­mer staff writer at In These Times and author of Nec­es­sary Trou­ble: Amer­i­cans in Revolt , which Robin D.G. Kel­ley called ​“The most com­pelling social and polit­i­cal por­trait of our age.” You can fol­low her on Twit­ter @sarahljaffe.
Have thoughts or reactions to this or any other piece that you'd like to share? Send us a note with the Letter to the Editor form.
More articles by Sarah Jaffe
Feature
Will Dems Fight the Nomination of Brett Kavanaugh? Organizers Are Pushing Chuck Schumer To Act.
A conversation with an organizer from Indivisible.
Labor
What the Supreme Court’s Week of Hell Means for People of Color
Feature
An Immigration Lawyer Explains What’s Really Happening with Family Separation
A conversation with Eve Stotland, director of legal services for The Door.
Similar articles
Feature
Cook County Jail Is on Lockdown Over Van Dyke Verdict—And Activists Are Furious
“These people are being punished because a cop is going to jail? It doesn’t make sense," says activist Hesna Bokoum.
Sarah Lazare
Feature
Escape From Recession
What you should know about the economic stimulus package
Jared Bernstein and Lawrence Mishel
Feature
Why the DNC’s Superdelegate Reforms Were a Major Victory for the Sanders Wing
From stripping power from superdelegates to enforcing financial oversight, backers of Bernie Sanders scored a number of huge wins at the DNC summer meeting. And they could have a major impact in 2020.
Branko Marcetic
Subscribe to our free newsletter
Fearless journalism that speaks truth to power
Limited Time: