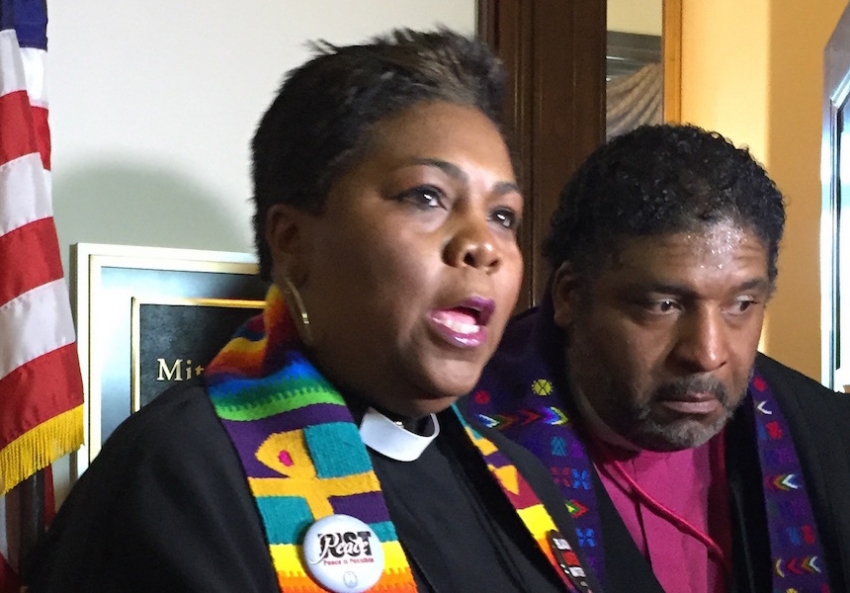 "We’re going to be a multiracial country, and we’re going to have to figure out how to live together, and how to share power in a collective manner. That’s the reality," says Missouri Rev. Traci Blackmon.

The Reverend Who Preached Against Hate While Nazis Marched on Her

There are some things that cross all sacred texts: caring for the vulnerable, love of neighbor as love of self. At a time when those basic principles are under assault, all faiths must come together.

The Rev. Traci Blackmon is senior pastor of Christ the King Church in Florissant, Mo., and executive minister of justice and witness ministries for the United Church of Christ. Her organizing work in nearby Ferguson after the killing of Michael Brown made Blackmon a leading voice on racial justice. She led an interfaith service in Charlottesville, Va., just before the August 12 white nationalist rally. In These Times spoke with her in August, soon after.

Did you expect violence in Charlottesville?

The flyers that promoted the event talked about weapons and being armed. But we knew as people of faith, we had a responsibility to hold our moral center and not return that violence. So we were in church to prepare ourselves spiritually in that regard. [During the service] we received a notification that we would not be able to leave right away because this mass was coming our way with lit torches, chanting messages from Hitler’s regime. They were chanting, “Jews will not replace us” and “White lives matter.” We were ushered out of back doors and side doors into cars. I had to drive through them.

Why do you participate in interfaith services?

There are some things that cross all sacred texts: caring for the vulnerable, love of neighbor as love of self. At a time when those basic principles are under assault, all faiths must come together, not in uniformity, but in unity around what we all hold sacred. Though Christianity is the dominant religion here—and I am Christian, I believe in Jesus Christ as my Lord and Savior—I also must accept the fact that there are people who have other ways of worshipping God. I will protect their right to do so, just as I want my right protected.

That’s especially powerful when you think about how the same people who say the Left is waging a war on Christmas are those trying to strip Muslims’ right to practice their faith.

I find that most ironic. I am comfortable with [interfaith services] because I am secure in my faith.

Right-wing preachers are angry that Jesus is being characterized by progressive Christians as a social justice fighter. What would you say to them?

An Afrocentric Palestinian who was born on the wrong side of the tracks challenging the empire of his day and challenging the religious voices of his day … I don’t see how you serve that Jesus and [think] the gospel [is not] social. It deals with the ills of society. The scriptures tell us to care for the least of these. So I can only assume that we, even clergy, have in some cases become so comfortable in our privilege and our narratives that mingle the gospel with messages of nationalism, messages of capitalism and messages of white supremacy.

Why did your congregation at Christ the King United Church feel compelled to step up and fight the attempt to repeal Obamacare?

There’s a moral mandate that supersedes legality. We should care for the sick, shelter the stranger, feed the hungry. If we have policies that are contrary to that, that are morally bankrupt, people of faith are compelled to speak out on behalf of those who cannot speak out for themselves. I was also vocal against deportation policies under President Obama.

Are you afraid of the rise of white supremacy?

Elizabeth Adetiba is freelance writer based in New York. Her writing has appeared in The Huffington Post, Fusion, The Black Youth Project, and SB Nation.