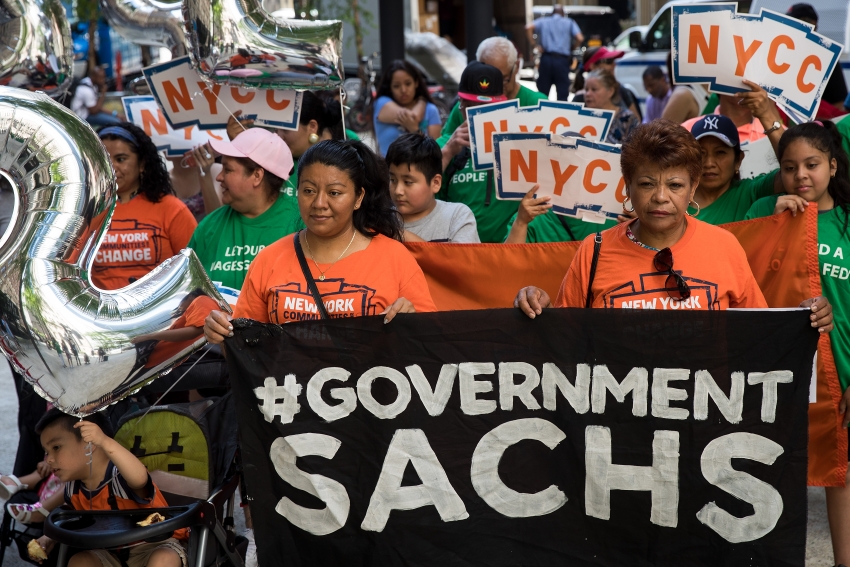 A new report explains that money impacts politicians’ decisions far more than they are willing to admit. (Drew Angerer/Getty Images)

Want Proof that Corporate Money Influences Politicians? This New Study Has It.

It really is no coincidence that the members of Congress who receive the most money from Wall Street are also the most hands-off on regulating it.

Politicians may boast about their personal integrity as a bulwark against corruption, but the influence of political spending is far-reaching, murky and often shapes real legislative outcomes.

Ask just about any politician whether financial contributions influence their decision making and you will hear that they’re entirely incorruptible.

Take Hillary Clinton. At a February 2016 town hall with CNN, the then-presidential-hopeful said she accepted $675,000 in speaking fees from Goldman Sachs because, “that’s what they offered.” She went on to explain why this corporate cash wouldn’t have any impact on her decision-making anyway. “Anybody who knows me, who thinks that they can influence me, name anything they’ve influenced me on. Just name one thing,” she said.

Many critics point to Clinton’s record on Wall Street regulation as a prime example. During her two terms as a U.S. senator, Goldman Sachs, Citigroup and J.P. Morgan Chase were all among Clinton’s top five campaign donors. In 2001, soon after entering the Senate, Clinton voted for a bankruptcy bill that was being pushed by big banks, earning her the ire of consumer advocates at the time, including Elizabeth Warren.

Over the course of Clinton’s career in the Senate, she legislated with a light touch on the industry, co-sponsoring only 25 out of 189 bills that financial-industry lobbyists identified as significant banking or finance legislation. As the Boston Globe has reported, this hands-off approach helped contribute to the financial sector’s ability to largely avoid regulation.

Other politicians suggest there’s hardly a need to regulate political spending at all. After the Supreme Court’s 2010 Citizens United ruling, which opened the floodgates for unlimited outside political spending from corporations, then-GOP Senate candidate Marco Rubio lauded the court’s decision.

Claiming that the regulations overturned by Citizens United “infringe on fundamental rights,” Rubio explained that, rather than advocate for campaign-finance restrictions, voters should simply “elect leaders who value policy and principles over politics and special interests.”

There may be no convincing Clinton or Rubio, but a new report explains that money impacts politicians’ decisions far more than they are willing to admit.

The authors of a recent Roosevelt Institute paper identified a series of high-profile cases in which political contributions influenced members of Congress on key floor votes involving financial reform.

To examine the influence of big money, the authors of the study focused on five votes in the U.S. House of Representatives relating to the Dodd-Frank financial-reform bill. They isolated specific representatives who initially voted in favor of the bill and subsequently voted to dismantle some of its key provisions. What they found was a direct link between voting behavior and campaign contributions from the financial sector.

According to the paper, “for every $100,000 that Democratic representatives received from finance, the odds they would break with their party’s majority support for the Dodd-Frank legislation increased by 13.9 percent. Democratic representatives who voted in favor of finance often received $200,000–$300,000 from that sector, which raised the odds of switching by 25–40 percent.”

The authors found similar results with telecommunications legislation. In a 2006 vote on network neutrality, every $1,000 in contributions from an anti-net-neutrality firm equated to a 2.6 percent greater chance of voting in those interests’ favor.

Thomas Ferguson, Professor Emeritus at the University of Massachusetts Boston, a Roosevelt Institute Senior Fellow and a co-author of the paper, says clearly money doesn’t just influence politics—it drives it. But many academics, like politicians, reject this view, arguing that contributions are unrelated to voting behavior.

This trend, Ferguson says, arises from an academic environment where ideology and funding are as inseparable as “siamese twins.” Austerity measures have slashed university funding and put pressure on academics to seek private grant money for research. As a result, says Ferguson, “There aren’t very many outside grants to do serious studies of political money.”

The outside interests driving academic funding operate in subtle ways, as does most political spending.

Ferguson and his co-authors, Jie Chen and Paul Jorgensen, point out that direct campaign contributions only scratch the surface of money in politics. “Political money resembles the electromagnetic spectrum,” they write. “The portions that you see represent but a fraction of the whole phenomenon.”

Their “spectrum of political money” highlights eight ways outside cash shapes political decision-making. These include payments to lawyers, politicians and foundations; money spent on lobbying and think tanks; formal campaign spending; the value of stock tips to political figures and public relations spending. Money flowing through these avenues is perfectly legal but often difficult to trace, creating countless opportunities for corruption.

Fortunately, voters seem far more attuned to this dire situation than many politicians and academics. Ferguson’s paper cites a June 2015 CBS News poll that found 84 percent of Americans believe money has too much influence in political campaigns.

So what reforms can the public push to tame the undue influence of money over U.S. politics? Ferguson stresses that publicly funded elections would go a long way toward lessening corruption. Under such systems, which exist in some form in 13 states and some cities, candidates raise money through democracy vouchers or matched contributions from public funds, allowing their platforms to reach voters without the megaphone of corporate cash.

The other major reform championed by Ferguson is a constitutional amendment barring all corporate and special-interest money from elections. “Corporations are creatures of the state; they’re legal entities. They’re not natural persons,” he says. “So I would ban them from direct political contributions, and I would also put ceilings on cash [from individual contributors].”

Even these reforms wouldn’t solve the revolving door issue in which former government officials use their Capitol Hill clout to score access for their new private-sector employers. Ferguson offers two solutions to this problem. “I would ban any contact with supervised entities by regulatory personnel for many years, not just one or two,” he says. “And I would pay government employees, especially at high levels, enough so that they do not need to go to the private sector to get their children educated.”

Politicians may boast about their personal integrity as a bulwark against corruption, but the influence of political spending is far-reaching, murky and often shapes real legislative outcomes.

Only by acknowledging how money drives politics can we hope to pass democratic reforms that force politicians to be accountable to their constituents, not their wealthy donors.