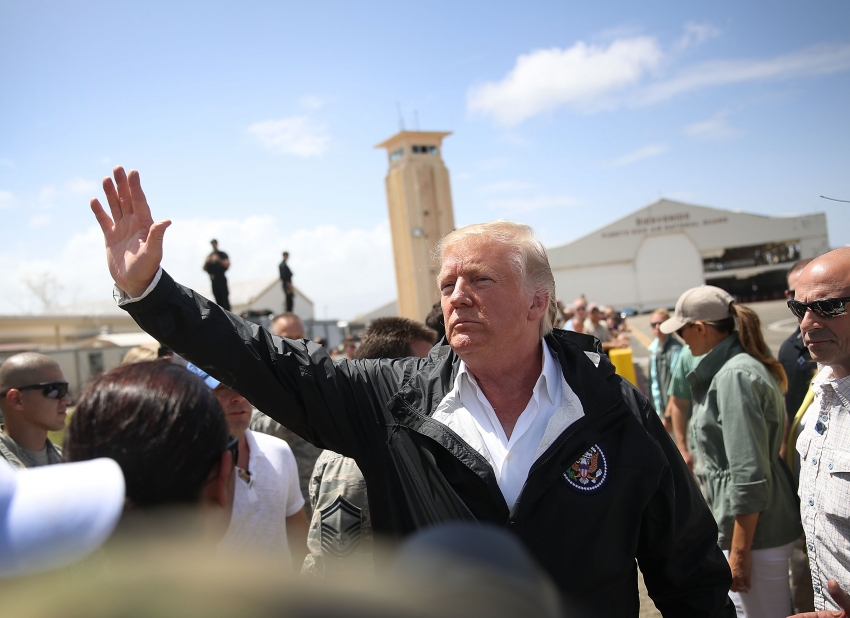 President Donald Trump waves as he arrives at the Muniz Air National Guard Base for a visit after Hurricane Maria hit the island on October 3, 2017 in Carolina, Puerto Rico. (Photo by Joe Raedle/Getty Images)

The president’s upside-down priorities were on full display during his visit to Puerto Rico on Tuesday.

Speaking in front of an audience in Puerto Rico on Tuesday, Trump—sitting between his wife Melania and the island’s governor Ricardo Rosselló—motioned to White House Budget Director Mick Mulvaney, who, as he said, “is in charge of a thing called budget.”

“I hate to tell you, Puerto Rico,” Trump spat, “but you’ve thrown our budget a little out of whack, because we’ve spent a lot of money on Puerto Rico, and that’s fine.” He also suggested that Hurricane Maria—which has left 3.4 million U.S. citizens without power and struggling to meet basic needs—didn’t qualify as a “real catastrophe” like Hurricane Katrina. Later on, he told a family of Maria victims to “have a good time.”

Trump doesn’t care about Puerto Rico. He also doesn’t care much about spending, which is what makes the remarks he gave on Tuesday so disingenuous. Like the rest of the party, Trump’s main concern is that federal money is spent on the things he likes.

He didn’t moan about the budget when Congress passed a $700 billion defense bill last week. The Committee for a Responsible Federal Budget estimated that the White House’s tax plan would add roughly $2.2 trillion to the federal deficit, a charge top economic advisor and tax reform architect Gary Cohn found easy enough to dismiss as immaterial in a White House press briefing last week. Talking about the budget this past Sunday, Mulvaney himself said, “We need … deficits. If we simply look at this as being deficit-neutral, you’re never going to get the type of tax reform and tax reductions that you need to get to sustain 3 percent economic growth.”

Given that he kicked off his tax reform push in front of an oil refinery in North Dakota, Trump also likely also doesn’t care much about the results of a study released Tuesday from Oil Change International, which finds that Congress each year extends $14.7 billion in federal subsidies and $5.8 billion in yearly state-level incentives to the fossil fuel industry. According to the report’s findings, the cost of annual federal fossil fuel production subsidies equals the projected 2018 budget cuts from Trump’s proposals to slash 10 public programs and services. “Misplaced priorities, not a scarcity of resources,” authors write, “are driving this administration’s efforts to balance the national budget at the expense of the most vulnerable.”

Janet Redman, U.S. policy director of Oil Change International and principal author of the report, told In These Times that Trump’s statements about the budget impacts of Hurricane Maria in Puerto Rico were “morally offensive, especially at the same moment that the U.S. government is still handing out about $15 billion a year in subsidies to some of the most profitable industries in the US.”

“That he would have the gall to say there’s not money for recovery for American families, taxpayers and workers,” she says, “really shows Trump’s primary agenda: to serve the fossil fuel industry, not the American public—either here in the mainland or in parts of the country that aren’t right in front to this face.”

The New York Times reported that the White House tax plan would bring “a potentially huge windfall for the wealthiest Americans.” It would also be a major boon to the fossil fuel industry, cutting the corporate tax rate and making it easier for them to repatriate profits made from exploration abroad.

The American Petroleum Institute (API), a trade lobby for the oil industry, said in a statement that the proposal would “strengthen” the U.S. “energy renaissance.” API President and CEO Jack Gerard beamed: “Our industry supports pro-growth tax reform, and today leaders in Congress and the administration demonstrated their commitment to achieving this shared goal.”

Redman says that her group’s new study considers the definition of subsidies used by the World Trade Organization and Organization for Economic Co-operation and Development, including “any government action that would either lower the cost of production or consumption, or raise the price received by producers.” These sorts of policies range from industry-specific tax breaks like the “intangible drilling costs deduction” to preferential leasing rates on resource-rich public lands. And because new fossil fuel infrastructure tends to last for 30 or 40 years—well beyond when climate scientists warn many of the world’s economies should be moving to decarbonize, Redman says, “We’re most concerned about the subsidies that drive decision-making on the producer side.”

Ending fossil fuel subsidies is something of a shibboleth for world leaders: The G20 first pledged to phase them out in 2009, with little motion made since in that direction. Even countries considered leaders in renewable energy, like Germany, still get large parts of their fuel from coal.

A study released in January by the non-profit Stockholm Environmental Institute (SEI) found that subsidies can be the make-or-break factor for whether a drilling project moves forward. In the absence of these federal and state incentives, researchers note that an estimated 45 percent of U.S. oil production would be unprofitable. Examining more than 800 undeveloped U.S. oil fields, the SEI team concluded that—sans subsidies—nearly half would never be set up for production.

That the oil industry has been struggling of late isn’t news to corporations like TransCanada, the company behind the Keystone XL that’s grown increasingly ambivalent about whether the controversial infrastructure project should be built at all. For many reasons, the collapse of oil prices in the last several years has left the industry weaker than in its heyday before the crash. Cutting subsidies could be a way to kick it while it’s down, and spur the transition to renewables.

“There’s more than enough money for support for Puerto Rico to rebuild, and rebuild in a way that makes it a model for a new energy system,” Redman emphasized. “Trump could find that money immediately if he wanted to.”