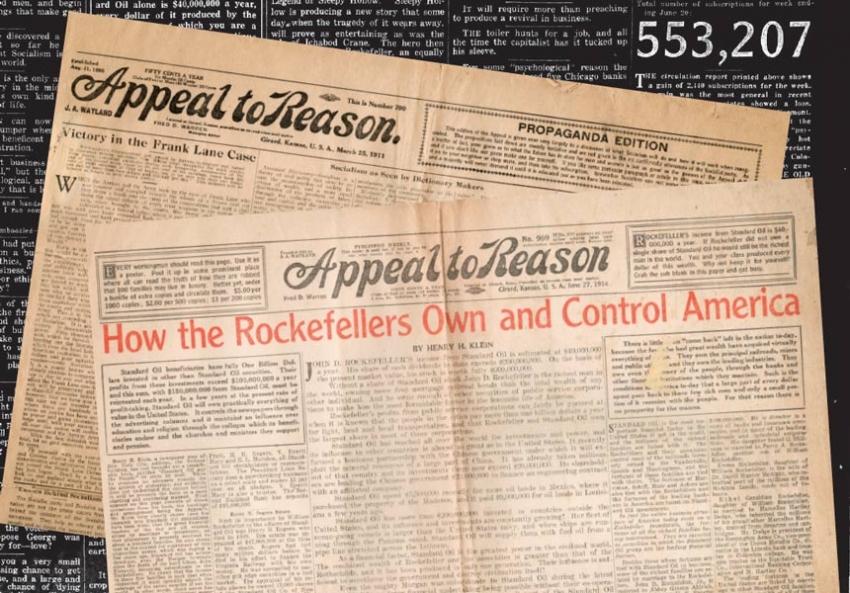 The socialist newspaper Appeal to Reason was published from 1895 to 1922, and served as an inspiration for In These Times.

Inside Appeal to Reason, the paper that inspired In These Times

When In These Times began 41 years ago, founder James Weinstein looked for inspiration to Appeal to Reason. This Kansas-based socialist newspaper ran from 1895 to 1922, reaching 720,000 subscribers at its height in 1912.

For most of its 27 years, the Appeal operated out of Girard, a small southeastern Kansas town. Today, if you drive the back roads around Girard, you’ll pass old mining pits filled with water and resident waterfowl. In the 2016 presidential election, 58 percent of the county’s voters went for Donald Trump. But the history of the Appeal is a reminder that current rhetoric reducing the complexity of the Midwest and the Plains to red-state stereotypes ignores the other “red” history of the region, the country and, of course, the press.

Julius A. Wayland, a longtime independent socialist journalist and editor, founded the Appeal in Kansas City, Mo. He moved the paper to the smaller, less expensive Girard two years later. The town’s social conditions also made it ripe for a press project focused on labor issues. It had railroad access and was located in the middle of coal country, in a region full of recently arrived European mine workers.

By the early 20th century, large stacks of the paper had to be carried off in long lines of carts or railroad cars, and the town drew leftists from across the nation. The Appeal published a range of socialist writers, from Eugene Debs, Mother Jones and Kate Richards O’Hare to William Morris, Charlotte Perkins Gilman and Jack London. In 1904, editor Fred Warren gave Upton Sinclair the advance that sent him to the Chicago stockyards for what became one of the most famous works of American social criticism, The Jungle (1906), which first appeared as a serial in the Appeal.

John Graham, author of Yours for the Revolution, a definitive history of the Appeal, writes, “If there were working conditions or a strike to publicize in West Virginia, Colorado or California, the Appeal was there; if Milwaukee, Wis., and Schenectady, N.Y., voted the Socialist ticket, Appeal correspondents reported the victories; if states were without their own socialist papers, the Appeal printed individual state editions.” The Appeal sponsored “study clubs” and sent special editions to union organizers and strikers around the country.

American socialism in the era of Appeal to Reason was diverse and persuasive to many, but socialists had their limitations. Reading through the archives is a cautionary reminder of the contradictory history of the American Left, especially with respect to race and immigration.

You will find, for example, Appeal articles calling for segregationist approaches to labor organizing. In 1915’s “Socialism and the Negro,” staff writer John Walker Gunn argued for “the same rights of freedom and opportunity” for African-American workers, but assured his white readers this did not mean “intimate social equality.”

The Appeal weathered many legal and political attacks. In 1909, Appeal editor Fred D. Warren was sent to Leavenworth penitentiary for mailing “defamatory and threatening” materials. (In a publicity stunt meant to highlight union issues, he’d offered a reward for the capture of Kentucky’s ex-governor, who had been indicted for murder.) Warren used his time behind bars to document atrocious conditions at the prison itself. He and Appeal staff were then indicted for sending “indecent” materials through the mail—namely, Warren’s report on prison conditions, including sexual assaults against inmates. (The charges were dismissed.)

The toll of these attacks became especially severe for Wayland, who was left exhausted by his work and personal struggles; he committed suicide in 1912. When World War I broke out, the Appeal initially opposed the war, in line with the Socialist Party. But under an escalating Red Scare, including censorship of the radical press, then-editor Emmanuel Haldeman-Julius renamed the paper the New Appeal and shifted its stance. After the war, editorial focus continued to drift away from socialist politics, and circulation wobbled under subsequent editors until the paper finally ceased publication.

Pressures against an open and progressive press never subside in the United States—but neither does public appetite for progressive journalism. The challenge of finding the places, people and means to do vibrant work is ongoing, and on us.

Sharon Carson works in progressive journalism and humanities, and teaches literature and philosophy at the University of North Dakota.