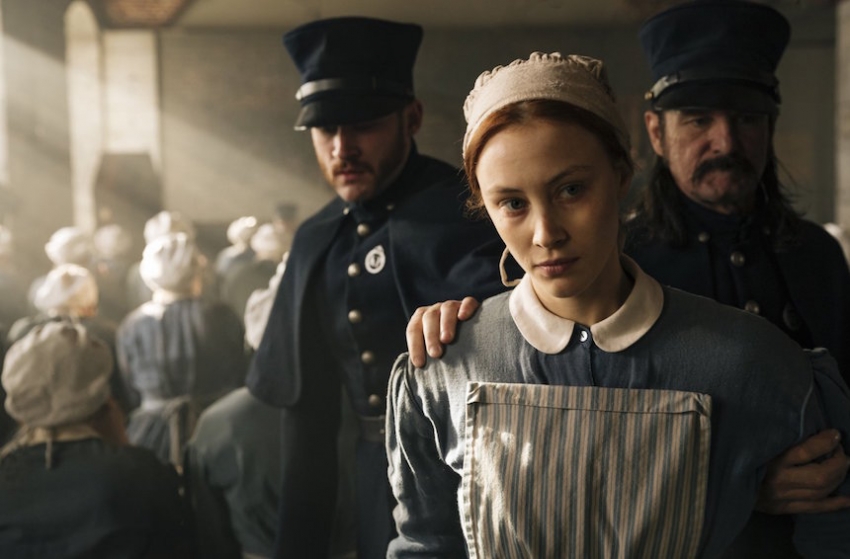 The Handmaid’s Tale is used as a catch-all feminist allegory. But it’s the specificity of Alias Grace, Netflix’s latest Margaret Atwood adaptation, that makes it so pertinent.

Margaret Atwood is blessed and/or cursed with the credit for 2017’s go-to feminist analogy. Any time our legislature moves to defund Planned Parenthood, any time we hear a bizarre bill about “fetal personhood” or a horrific court case about women being forced to give their rapists custody, any time an old white man makes it clear that women are best kept silent and pregnant, someone says that it’s “just like The Handmaid’s Tale.”

Atwood’s 1986 dystopia provides an instantly legible meme for today’s protesters. More than one sign at last January’s Women’s March read “Make Margaret Atwood Fiction Again.” Other Handmaid-derived protest slogans have been around for what feels like decades: Nolite te bastardes carborundorum (Latin for “don’t let the bastards get you down,” which I used to find carved into bathroom stalls in college) and “The Handmaid’s Tale is not an instruction manual.” In a queasy mix of protest and marketing, Hulu sent women dressed as real-life handmaids to wander around the South by Southwest festival in Austin, Texas—and, in short order, feminists whipped up their own handmaid costumes to taunt anti-choice state legislatures in Texas and elsewhere.

All this is well-deserved. The Handmaid’s Tale is a great book, one that reclaimed the moral high ground for reproductive justice. In the mid-‘80s, reproductive rights activists were on the defensive; they’d forsaken the sexual radicalism of the ‘70s, and were framing their points in the anodyne language of “choice” so as to evade the ever-heavier stigma of abortion. The Handmaid’s Tale was a cry from the gut, and made it impossible to forget that we were talking about women’s lives.

It is also—and I hate to have to point this out—not the only book Margaret Atwood has ever written. Treating it as such undermines the complexity of her thought, and makes her seem less relevant and prophetic than she is. Case in point: The new Netflix series based on her 1997 novel, Alias Grace, adapted for the screen by Sarah Polley and directed by the legendary Mary Harron (I Shot Andy Warhol, American Psycho). Not only is it a success on all levels, it’s an even better fit than Handmaid for the sexual politics of the Trump era.

The plot of Alias Grace is drawn from the 1843 murder trial of Grace Marks, a 17-year-old Irish-Canadian domestic worker. She was convicted of colluding with another servant, James McDermott, to bludgeon and strangle housekeeper Nancy Montgomery before shooting their mutual employer, Thomas Kinnear. McDermott insisted the murders had been Marks’ idea; Marks claimed McDermott had forced her to participate; the public was captivated by the salacious nature of the case (Montgomery had been sleeping with Kinnear, and living basically as his wife) and by “some doubt over whether the female prisoner had been a willing or reluctant participant in the murder.” It helped that Grace Marks was, by all accounts, extremely pretty. The case was sort of a dry run for the 20th and 21st century’s economy of murder-as-media-spectacle; on the day of her trial, so many people crowded into the courtroom that authorities were worried the floor would collapse.

Alias Grace preserves the ambiguity at the heart of Marks’ case; we enter the story uncertain of her guilt, and we leave with the same uncertainty, though our reasons have changed. Nor do we see much of that famous trial. As with I Shot Andy Warhol—the Harron project that feels like a direct forebear of this one—the crime is not the point of this true-crime narrative. What Alias Grace does, more than anything, is to de-sensationalize Grace Marks by putting her in context.

Through her conversations with a fictional psychiatrist, we learn about Grace’s traumatic immigration from Ireland; the torture she experienced, both in prison and in the mental asylum where she was at one point sent in lieu of incarceration; and, most pertinently, the intense sexual precarity of life as a housemaid. Grace is sexually abused, first by her father, then by a series of male employers—but then, every female domestic in this story, including Nancy Montgomery, was seen as both a servant and a potential sexual outlet. In telling her story, Grace continually returns to one of her fellow housemaids, Mary Whitney, who slept with her master’s son and died as the result of a botched abortion. Grace was paid to keep quiet, and Mary’s story becomes a sort of talisman for the injustices that have directed the course of her life: The vast power imbalances between servants and masters, the secrets women are asked to keep for men, the question of who becomes a “celebrated murderess” and whose crimes go unreported and unpunished.

There are strong echoes of The Handmaid’s Tale here. Housemaids and handmaids both constitute a sexually disposable female underclass, and the predatory master’s son calls to mind the queasy “flirtation” between Offred and her designated rapist, Fred. At one point, Grace explains that she didn’t know what a particular man looked like because her bonnet blocked her view, and “I’d’ve had to turn my head,” which would have been unladylike; the gaze-blocking effect of female headgear is the subject of one of the most memorable passages in Handmaid. The difference is that this time, the setting is real, and the injustices depicted are historical fact. Atwood famously claimed that, in The Handmaid’s Tale, she “[did] not include anything that human beings had not already done in some other place or time, or for which the technology did not already exist.” But those long-ago cruelties, like Grace Marks herself, benefit from being put in context.

The Handmaid’s Tale has retained its power as a metaphor in part because it boils all social power dynamics down to the simple math of male = oppressor and female = oppressed, with only creepy patriarchy-enabling Serena Joy standing as an avatar of women’s ability to participate in oppressive systems. The narrator, Offred, is well-educated, upper-middle-class, and white; the shock comes from seeing a woman with every advantage being reduced to chattel. But in 2017, this has the troubling effect of making Atwood’s story seem blind to intersectionality, especially given that lots of the atrocities Offred endures—institutionalized rape, having children sold or taken away, abuse by a jealous mistress—are imported directly from American slavery. Atwood is too smart to overlook racism; in her novel, white supremacy shows its head when the “Children of Ham” (people of color) are mysteriously disposed of in purges. Still: Offred’s story has an alarming amount of unacknowledged overlap with, say, Harriet Jacobs’. As Evan Narcisse wrote for io9, the story “invokes the specificity of oppressions that people of color have faced in American history, only it applies them almost exclusively to white women.”

Victorian Canada and Trump-era America are a lot closer than we think. The series focus on Marks’ sexual exploitation never wavers; the story is already being called a fictional reflection of the #MeToo movement. But the story also speaks to our present-day xenophobia, class prejudice, or cuts in healthcare that cruelly target the disabled; it asks us to consider how those, too, conspire to render women disposable and easily silenced. If we can empathize with Grace Marks, the series implicitly insists, we should be able to empathize with all the other women our society renders invisible. We should be prepared to see ourselves, not in the heroine of the piece, but in Nancy Montgomery’s cruelly self-absorbed climb up the class ladder, or in the lady of the house, paying off the housemaid to conceal certain truths about her son.

In its final hour—beautifully shot by Herron, and even more beautifully acted by Sarah Gadon as Marks—Alias Grace tilts into full-fledged horror. The twist, which I won’t spoil here, involves where women’s voices go when we refuse to hear them, and what happens to women who bury their rage. It’s sheer luck, I suppose, that this hour aired in a moment when women’s rage and hurt is surfacing so explosively, and when we’re seeing story after story of powerful male predators and the women they’ve kept quiet. But even as Grace Marks’ pain feels universal, this story reminds us that much about it—and about the stories of the women most hurt by our current dystopia, many of whom will live and die without a public platform—remains wholly particular. In the miniseries’ final, heart-stopping shot, Grace Marks’ gaze rests on us, a reminder that she has never told us everything she knows. Knowing everything about Grace Marks is not the point. The point is that we can see her—and that, by doing so, we have committed ourselves to being seen.