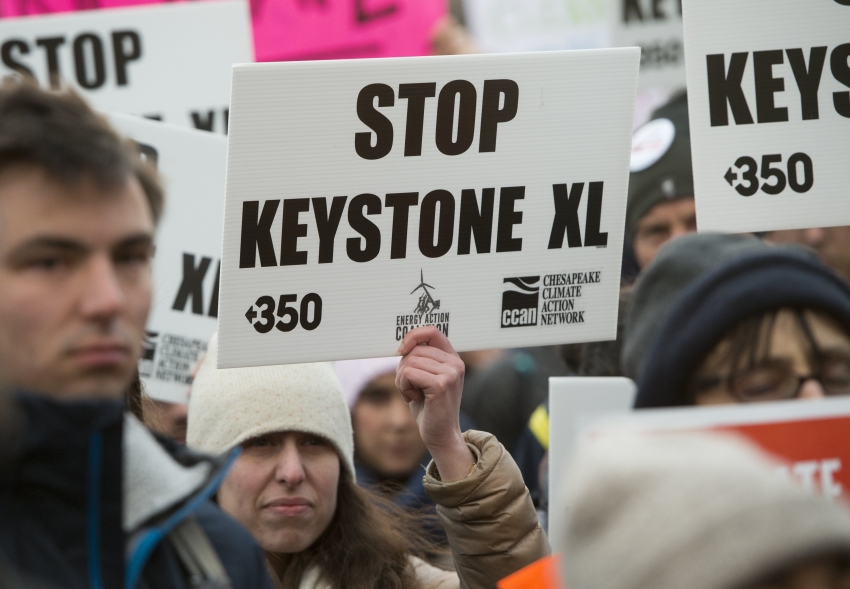 Opponents of the Keystone XL and Dakota Access pipelines hold a rally as they protest US President Donald Trump's executive orders advancing their construction, at Lafayette Park next to the White House in Washington, DC, on January 24, 2017. (SAUL LOEB/AFP/Getty Images)

After the Keystone XL Approval, Here’s What’s Next for the Climate Movement

The battle is far from over—and has already transformed the way environmental campaigns are waged.

By naming an enemy, the battle against TransCanada in the Great Plains defined the terms of the debate and drew a firm line in the sand: Either stand with a multinational corporation out to wreck the planet or with the people whose lives they stand ready to destroy.

After months of public hearings and deliberation, Nebraska’s Public Service commission on November 20 approved a route for the Keystone XL pipeline in a 3-2 decision. The years-running fight against the controversial infrastructure project, however, is far from over: Organizers up and down the project’s route are already lining up to stop it, whether in courts or on construction sites. And whether Keystone XL ends up getting built or not, the battle against it has already changed the way Americans relate to the fossil fuel industry.

Last Monday’s outcome wasn’t an ideal result for either side. The confines of what the commission was allowed to consider in its decision were strict. Commissioners were barred from considering either the economic viability of the project—whether TransCanada actually wants to build it—as well as environmental harm from oil spills. Just days before the ruling, the original Keystone pipeline blurted 200,000 gallons of crude oil into South Dakota.

The decision wasn’t a total win for TransCanada. While the points where the pipeline could enter and leave Nebraska remain the same, the route the PSC approved differs significantly from the one the company first floated, and involves six counties that weren’t included on the route before. It remains to be seen what kinds of additional permitting will be required before construction can begin, and what sort of consultation either the state, the company or federal government will need to engage in before there’s an official green light to start building.

The Canada-based oil company isn’t likely to see opposition to their now-trademark project stop anytime soon. Before the ruling came down, members of the Sioux Nation gathered in South Dakota to sign a historic treaty, pledging to resist the pipeline. “Nothing has changed at all in our defense of land, air and water of the Oceti Sakowin Lands,” pipeline fighter Faith Spotted Eagle told that gathering. “If anything, it has become more focused, stronger and more adamant after Standing Rock.”

At least 8,000 people have also already pledged to risk arrest to get in TransCanada’s way, through a document being circulated by environmental groups.

TransCanada faces legal challenges over the Keystone XL elsewhere along its proposed route as well. Montana’s initial environmental review of the pipeline is being challenged in court, with critics alleging the process that led the way for its approval wasn’t thorough enough. Two days after the PSC issued its decision, a federal judge rebuffed TransCanada and the White House by ruling that a lawsuit against the Trump administration’s approval of the pipeline could proceed, erecting yet another barrier to its construction.

For these and other reasons, the business press has been cool on the pipeline’s prospects. Oil markets have shifted dramatically since the project was proposed, and the kinds of fuel prices that made the pipeline a profitable investment almost a decade ago—when the project was first floated—are a thing of the past.

For that and a host of other reasons, including opposition along the proposed route and elsewhere, TransCanada has been famously ambivalent about the project. As of this summer, the company said it would decide whether to invest in the Keystone XL by December.

Reporting on Monday’s ruling, the vice president from Moody’s Investors Services told Reuters, ”While today’s Keystone XL pipeline approval is an important milestone, it does not provide certainty that the project will ultimately be built and begin operating.” Bloomberg noted that the PSC’s decision “could throw more uncertainty into the mix.”

Even TransCanada itself demurred about Keystone XL’s future. “As a result of today's decision, we will conduct a careful review of the Public Service Commission's ruling while assessing how the decision would impact the cost and schedule of the project,” said Russ Girling, TransCanada's president and chief executive officer, in a statement.

Whatever the fate of the Keystone XL project ends up being, the fight over the pipeline has changed the way climate and environmental campaigns are waged.

The Keystone battle gave the climate fight a much-needed shot in the arm following the collapse of both UN climate negotiations in Copenhagen in 2009 and Waxman-Markey, the doomed cap-and-trade trading bill filled with giveaways to polluters. Big green groups had invested in these behind-closed-doors processes for years, all while the physics behind global warming seemed to be looking bleaker by the week. A 2013 post-mortem of Waxman-Markey by political sociologist Theda Skocpol found that several of the groups pushing for that legislation systematically disinvested from grassroots organizing, doubling down on lobbying staff in Washington for the sake of getting a bill passed by any means necessary.

In contrast to the top-down strategies employed before it, the big successes in the Keystone fight stemmed from the not-always-easy alliances between traditionally disparate groups: Indigenous communities and white ranchers working with larger green groups working with student activists and even elected officials, all while lawyers waged a legal battle in court rooms dotted all around the Great Plains and beyond. All at once, the Keystone fight became one over native sovereignty, against eminent domain and for clean water and the future of life on earth. The battle against the Keystone XL pipeline has almost always been about much more than a single oil pipeline. And though it was hardly the first such fight, Keystone’s prominence made it possible to start seeing environmentalism at a national scale as a movement with room for people who aren’t hippies and tree huggers.

By naming an enemy, the battle against TransCanada in the Great Plains defined the terms of the debate and drew a firm line in the sand: Either stand with a multinational corporation out to wreck the planet or with the people whose lives they stand ready to destroy. Unlike Waxman-Markey-style cap-and-trade, a policy difficult to grasp for even policy wonks, what pipeline fighters wanted was clear and made intuitive sense to the American public, be it clean water or the right not to have land taken away for the benefit of a foreign corporation.

Just a few years ago, mainstream environmentalism—dictated by a handful of environmental NGOs—was virtually synonymous with corporate-friendly pushes to change lightbulbs and bike more. While a strain of lifestyle activism remains in the climate movement, even organizations with multi-million dollar budgets—like 350.org—have been injected with an anti-corporate zeal. That’s the result both of timing—Occupy Wall Street kicked off within months of hundreds getting arrested in Washington D.C. to protest Keystone XL—and ample pressure from the grassroots, particularly those living along the pipeline’s path. This trend even led a legacy green like Sierra Club to change its policy in partaking in civil disobedience.

Two massive waves of arrests propelled hundreds of college students (myself included) into years of climate organizing, and a new understanding of what it meant to lower emissions. In that sense, anti-Keystone organizers also helped put the extraction—and the outsized responsibility of coal, oil and natural gas companies—at the center of the conversation about climate change, prompting a shift away from talk of recycling and the sausage-making behind climate policymaking.

On the heels of COP23, there’s a danger of slipping backward on the progress the Keystone XL fight made to the climate fight more broadly. The self-appointed official face of the resistance to Trump’s climate policies in Bonn earlier this month—convened under the banner “We Are Still In”—contains a throwback to corporate-friendly environmentalism. Largely bankrolled by former New York City Mayor Michael Bloomberg, this contingent featured a rotating cast of corporate executives from Walmart to big banks to the country’s largest electric utility. Voices from fights like Keystone were almost totally absent, and several people who’d worked against that pipeline and other fossil fuel infrastructure disrupted California Gov. Jerry Brown’s opening remarks over his support for fracking. Throughout the week, Brown touted California’s cap-and-trade program—drafted in part by the fossil fuel industry itself—as a model climate policy for states around the country.

Besides the wind he’s putting behind the wings of the fossil fuel industry, Trump is dangerous because he sets such a low bar for what constitutes leadership on climate change. For that, we might do better to look toward tribes and ranchers along the Keystone’s route than Bloomberg, Al Gore or any number of self-appointed billionaire climate saviors.