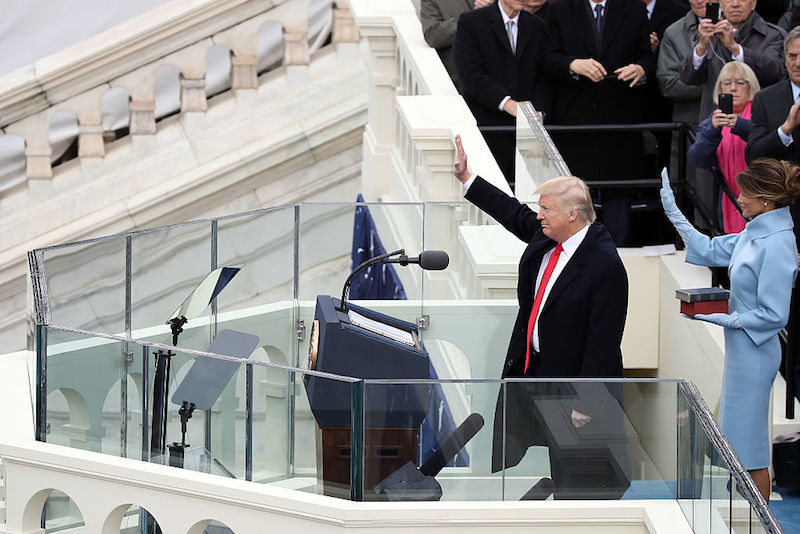 After taking the oath of office, President Donald Trump and his wife Melania salute the crowd gathered on the West Front of the U.S. Capitol on Jan. 20, 2017. (Photo by Drew Angerer / Getty Images)

The Life-Changing Magic of Tidying Up Hillary

"The Other Betsy" made a profession out of serving as Hillary’s high-school gatekeeper, allowing access only to the loyal circle. They made jewelry for her. They made hats for her. They cheered her when she debated against Bernie. It’s good I wasn’t invited.

It’s been a year, exactly, since we’ve had a new president. Some of us have marched, some have written letters, others haven’t gotten out of bed yet. Me, I keep returning to my basement. It’s time to move on, and there’s stuff down there I need to let go. There are these boxes—all alike, all pretty full, and all neatly lettered: H-I-L-L-A-R-Y.

Inside are newspapers and magazines, letters and invitations, books, bumper stickers, photos, fridge magnets, and “Bill Clinton and his Family” paper dolls. I could have started a presidential archive or made a killing on eBay. But now it’s too late.

Like most of you, I voted for Hillary in the general election. But in the primary, Bernie was my guy. That made me feel more than a little guilty, like I was cheating on a friend—because in a way, I was. Hillary and I, you see, go way back together—same hometown, same schools, and birthdays just five days apart.

In grade school, we were pretty close, like when I helped make posters for her first failed presidential campaign—for eighth-grade class president. In high school, not so much, as she found her tribe among the student council reps. Me, I was an alto cowgirl in the high school production of “Oklahoma.” Need I say, we didn’t eat lunch together?

But fame is a funny thing. When Bill began to run for president, I couldn’t help myself. I wrote her long political mash notes, and she sent back little handwritten replies. And then, I got the invitation to the 1993 inauguration! There I was at the Arkansas Ball with Bruce Hornsby, Carole King and Bill Clinton on the saxophone. How could I toss all that stuff into a dumpster?

I found a possible way: the New York Times best-selling book by the Japanese organizing genius, Marie Kondo: The Life-Changing Magic of Tidying Up. She tells us: “We should be choosing what we want to keep, not what we want to get rid of. Take each item in one’s hand and ask: ‘Does this spark joy?’ If it does, keep it. If not, dispose of it.”

It was worth a try. I opened the box with the last clippings I had saved:

At the top: The front page of the Chicago Tribune from Nov. 10, 2016, two days after the election: “A New Reality Sinks In.” Easy call—this was the opposite of joy.

Below that, I had kept everything from the election, the primaries, Hillary’s years as Secretary of State and as New York Senator.

Much could go, but I spotted a small forgotten clipping from 2003. A two-hour Hillary TV bi-op had been in the works. For the title role, the producers were considering Sharon Stone. Sadly, it never got made, but somehow it brought joy.

The deeper I went, the more I saved: 1999: Parade magazine wondered why she “stayed with Bill.” Didn’t we all? 1998: Clinton impeached. 1997: She celebrated her 50th birthday. (So did I.) 1996: The website hillaryshair.com was created—if we needed it or not. And three years and two inches of clippings below: The scoop by the Weekly World News: “Hillary Clinton Adopts Alien Baby.” Of course I kept the whole paper.

Not all the memories were joyful: The failed health care plan, the Whitewater “scandal,” and at the bottom lay Jennifer Flowers and all the other women.

There was just too much stuff to make a decision about each piece. Marie Kondo tells us: “Tidying by category works like magic”. And the pay-off? “Putting your house in order is fun!” My fun category was going to be our hometown of Park Ridge. There was Hillary’s house, where we made those campaign posters, and Hillary’s church, where we were in the same confirmation class! But it was also complicated with articles about her real best friend—same school, same age, and the very same name—Betsy. I like to call her: “The Other Betsy.”

The Other Betsy didn’t sing, so she was in the student-council clique, and 50 years later, she still pretty much was. That’s the thing about high school. If it worked for you then, you never leave. Anyway, The Other Betsy made a profession out of serving as Hillary’s high-school gatekeeper, allowing access only to the loyal circle. They made jewelry for her. They made hats for her. They cheered her when she debated against Bernie. It’s good I wasn’t invited.

Of course the Clintons—both Hillary and Bill—had lots of other friends, too. But many found that if you didn’t adapt to their politics, things didn’t go well. Remember Lani Guinier, whom Bill nominated for Assistant Attorney General for Civil Rights? He wouldn’t defend her when the conservatives went on the attack. Or Hillary’s friendship with her mentor, Marian Wright Edelman of the Children’s Defense Fund? That took a serious hit when the Clintons went all in on welfare “reform.”

Is there a lesson here?

Not for me. After her nomination for president, I started magically thinking that maybe it’s never too late to re-connect. Put in a little work, post some stuff on Facebook, and we could still be best buds. Her inaugural ball was going to be amazing.

The opportunity came in September, when my son-in-law suggested that we join a group campaigning for her in Dubuque, Iowa. On a perfect fall day, we knocked on what seemed like hundreds of doors, and of course, most everyone was out.

But we still saw plenty: Grand old river mansions chopped up into cramped apartments; young white women so high on drugs that they couldn’t focus when we talked to them; young white men, quickly crossing the street to avoid us once they spotted our Hillary buttons.

And where was our candidate? Didn’t she see what’s going on? I should have written her a letter to let her know. That’s what a friend would have done. I didn’t.

So here I am with my basement of memories. It could be worse. I could have gone to school with Roy Moore. Or Harvey Weinstein.

Maybe it’s not so bad to give a few feet of shelf space to someone who won the national popular vote and was that-close to being our first woman president—even if I rarely supported her? She’s done more, risked more—and probably made more mistakes— than any other woman I’ll ever know. And I did know her.

I said to my husband, “I still can’t decide what to do with these boxes I’ve saved.” He said, “Just think how Hillary feels.”

But let’s give Marie Kondo the last word: “The space in which we live should be for the person we are becoming now, not for the person we were in the past.” That’s good advice for us all, especially starting out a difficult New Year.

I think I’ll send that to Hillary.