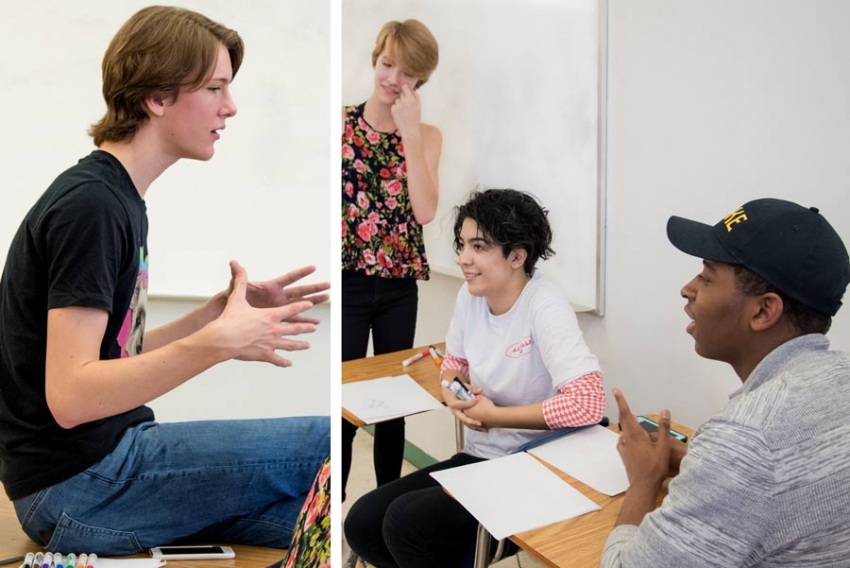 Behind the Explosion in Socialism Among American Teens

The dramatic growth of YDSA chapters confirms that millennials don’t think capitalism is working for them.

“There are a lot of myths about what socialism is,” says Ginty. “High school is the perfect time to start educating ourselves. We are the next generation of voters. We can’t keep depending on older adults to lead the way.”

TAMPA, FLA.—In a fluorescent lit classroom with handmade posters covering one wall, approximately 15 high school students are chanting the words of black revolutionary Assata Shakur: “It is our duty to fight for our freedom. It is our duty to win. We must love each other and we must support each other. We have nothing to lose but our chains.” With some embarrassed giggling, they recite it once, twice, three times, led by their visiting speaker, Pamela Gomez of the Hillsborough Community Protection Coalition, an alliance of local progressive groups.

These students are some of the 40-odd members of the Blake High School chapter of the Young Democratic Socialists of America (YDSA). The Tampa high school has 1,697 students, a majority of them black or Latino, and the YDSA chapter reflects that. The chapter also has a high concentration of LGBTQ students, the club’s biggest demographic bloc.

The chapter is the brainchild of Graham Shelor, 17. Slim and sandy-haired, a contemporary dancer as well as an organizer, Shelor grew up in a “fairly liberal” household but became disillusioned with the Democratic Party during the 2016 elections. “They lied to me and the people of America that they were going to make it work,” he says. “It led to a domino effect of me seeing the flaws in the current American system.”

Blake’s chapter is part of the youthful explosion of interest in socialism that has led to YDSA’s impressive recent growth, with 130 chapters and organizing committees, a five-fold increase in two years. Since 2015, the average age of a DSA member has dropped from 64 to 30.

YDSA’s members must be under 31 and are usually affiliated with a university or high school chapter. University chapters outnumber high school chapters by about 10 to 1. Like its parent organization, YDSA is multi-issue and “big tent.” It doesn’t require members to subscribe to any particular ideology beyond a commitment to feminism and an opposition to racism, imperialism, homophobia, transphobia and, of course, capitalism.

Chapters are largely autonomous: Though many work with their local DSA chapter, they’re not required to. Often, they focus on youth and campus-specific labor issues, like graduate student organizing or fighting the privatization of facilities staff at state universities. Blake’s YDSA has rallied in support of a long-promised wage hike for their teachers.

The meeting begins with announcements about upcoming actions, like canvassing for Medicare for All with the Tampa DSA. Then an invitation is issued to join Hillsborough Community Protection Coalition in campaigning for Black Lives Matter, immigrant rights and environmental justice.

For co-chair Kayla Ginty, 16, YDSA is more than a conduit to political action: It’s led her to question inherited political beliefs and define her adult political identity.

“There are a lot of myths about what socialism is,” says Ginty. “High school is the perfect time to start educating ourselves. We are the next generation of voters. We can’t keep depending on older adults to lead the way.”

“When the [2008 financial] crisis hit, I think a lot of [young] people experienced the impact of that on their home lives,” says YDSA National Coordinating Committee co-chair Michelle Fisher, 20. “Their parents got laid off, they got evicted from their homes, and they needed to be able to do something about it.”

In the 2016 primaries, 2 million people under 30—YDSA age—voted for Bernie Sanders, far more than voted for Clinton (770,000) and Trump (830,000) combined. A survey conducted by Harvard University’s Institute of Politics found only a minority—42 percent—of millennials support capitalism.

There’s a popular belief that youthful radicals turn into middle-aged conservatives. A 2014 study by Columbia University political scientists, however, found that “the political events of a voter’s teenage and early adult years, centered around the age of 18, are enormously important in the formation of these long-term partisan preferences.”

For the students in Blake High School YDSA, the “enormously important” political events of their formative years will include the surprisingly successful campaign of Bernie Sanders, the election-year failures of the Democratic Party and the rise of Trump. These events took place against a backdrop of skyrocketing student debt, a dismal job market, a significant decline in upward mobility, and the first shocks of capitalism driven climate change.

“Our generation is really political because we have to be,” says Fisher.

Rebecca Stoner is a writer in Chicago.