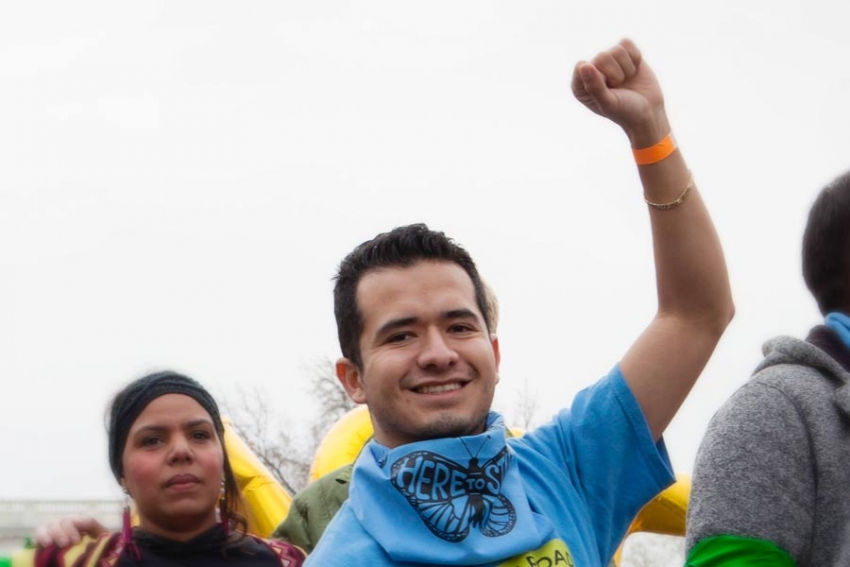 “We Won’t Let Him Sleep”: The Dreamers Hounding Chuck Schumer.

Talking immigrant justice with a DACA recipient taking the fight to Schumer’s doorstep.

For Republicans or Democrats to say that they need more time is very frustrating. People have waited 17 years and it’s not fair that we constantly have to be out there pushing for something. We’re angry.

Tell me about what motivated the action.

The name of that rally was “Our Lives Are On The Line, Chuck!” because that’s the reality. Many of us can’t return to our countries because of natural disasters or civil strife.

I’m from a Mexican state called Puebla known for being very religious. I’m openly gay here in New York and I wouldn’t be able to go back to my country and feel safe. There are many people who are in that situation. We’re angry with Schumer for not holding firm. He constantly promises us there’s going to be a fix.

But it’s 2018 and the Dream Act was introduced in 2001. So for Republicans or Democrats to say that they need more time is very frustrating. People have waited 17 years and it’s not fair that we constantly have to be out there pushing for something. We’re angry.

What’s most concerning about the present debate?

It’s emotionally draining to have your life played with like a football. There’s all this back and forth on these deals. On Twitter, Trump says he loves the Dreamers. That there’s nothing to worry about and DACA’s going to be fixed. But he’s the one who caused this chaos, right? He’s set on getting funding for the wall and I don’t think he’ll stop until he gets that.

For undocumented immigrants like myself, who have undocumented parents, it’s very scary to accept a deal that does not include protections for my people. I think that’s why many of us are fighting. This fight is not even about people with DACA status. This fight is about respect, justice and dignity for all our families.

How many years of school do you have left?

I have one year left. If there’s no fix on DACA or the Dream Act, then by the time I graduate I’m not going to be able to legally get a job. I will be at risk for deportation if there’s no fix for this.

How are immigrants you know dealing with the fear of immigration raids or having their status reported to ICE by neighbors?

Our parents are afraid of going out and doing day-to day things. My mom watches TV and she’s up to date on everything that involves immigration. When she hears that there are these ICE raids in places like Staten island, Long Island or at 7-Eleven stores she freaks out. She’s not able lead a normal life for herself in New York.

She always feels like she has to stay in the apartment because anytime she steps out she’s at risk of being deported or coming into contact with an ICE agent. I’m pretty sure that if I wanted to be like, “Hey mom let’s go to Philadelphia on a bus, if you’d like to take a day trip,” she’s going to be scared. She’s going to be concerned on the whole ride that at some point an ICE agent is going to stop us. That’s no way to live our lives.

What does true immigration reform look like for you?

I understand every country wants to defend their borders. But we don’t see the United States building a $25 billion border wall next to Canada. Trump’s policies are attacking immigrants of color mostly. People who are Muslim, Mexicans and other Latinos—people from places he considers “shithole” countries.

Democrats should consider the work that we do for this country. I’m proud to say that I’ve cleaned toilets growing up to be able to go to school. I’ve served at restaurants. I even worked at one of Trump’s hotels before he ran for president. My stepfather has been a server for twenty years. My mom cleaned houses. We do the jobs that not many people want to do. But we also know that we’re just as important as any other person who is American.

We take pride in these jobs because this is ultimately how we’re able to provide for our families. These jobs are how our undocumented parents are able to send their children to school. We take a lot of pride in that. We’re not taking any of the benefits that many Republicans say we are. I’m a student and can’t receive state or financial aid. I don’t even have health insurance. I think that’s the same story for the 11 million undocumented immigrants who are here and who have jobs.

Immigration reform should be acknowledged our contributions to the United States. That means giving us a path to citizenship. It also means that our communities need to be able to feel safe. That they don’t have to live with the fear of being separated from their families.