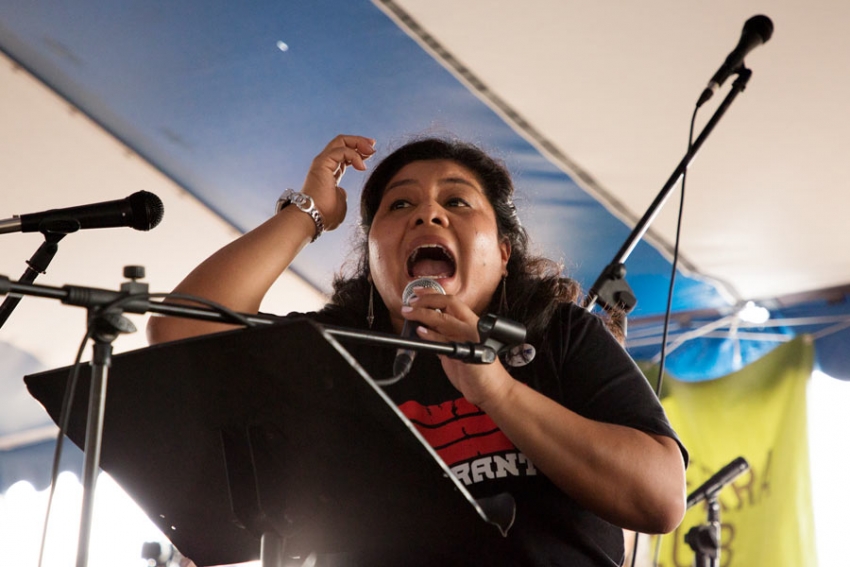 Tania Chávez of La Unión Del Pueblo Entero speaks out January 27 for a clean DREAM Act, with no provision to fund the proposed border wall.

In South Texas, a community rallies to protect both its wildlife and residents.

BY Yvonne S. Marquez
Share TweetReddit0 EmailPrint
Alamo, Texas—Defying the threat of rain, more than 600 protesters gather January 27 in an agricultural field next to the Santa Ana National Wildlife Refuge. They are here to oppose President Donald Trump’s proposed border wall, which would slice through not only the refuge, but the vibrant immigrant community that surrounds it.
Led by Esther Martinez, guitarist and vocalist of local punk rock group Fantástico, the lively crowd of environmentalists, immigrants, students, labor activists, poets, families and members of the Carrizo Comecrudo tribe kick off the event with a group rendition of Ben E. King’s “Stand By Me.” People clap in unison, their voices swelling in solidarity.
Taking the mic after the performance, Amanda Salas, a 31-year-old community organizer and the program emcee, jokes, “You didn’t think you were coming to church today, did you?”
The wildlife refuge, located along the banks of the Rio Grande, will be one of the first construction sites for the border wall if Congress approves funding. Unlike private land along the border, which the government would need to use eminent domain to acquire, the 2,088-acre preserve is an easy target.
Called by some the “crown jewel” of wildlife refuges, it is one of the world’s top birding destinations, home to 400 bird species. It also boasts 450 species of plants and more than 300 butterfly species, and provides habitat for the endangered ocelot.
A border wall would likely close off public access to parts of the refuge and cut through animals’ habitats. The wall may also trap animals on low ground, making them more vulnerable to flooding.
“This is really a local treasure,” says Clarissa Riojas, a middle school teacher who volunteers with the Lower Rio Grande Valley Sierra Club and helped organize the rally. “It is considered this very pristine natural sanctuary. That’s [one] reason why people are mobilized right now.”
Another reason is the threat to the larger community. The RGV No Border Wall Coalition, formed in May 2017, is a loose alliance including the local Sierra Club chapter, immigrants rights organization La Unión Del Pueblo Entero (LUPE), Defenders of Wildlife and other organizations. It organized the January event to spotlight not only the wall’s potential effects on the refuge but also on residents, including the region’s largely Mexican and Mexican-American population. Speakers ranged from a civil rights attorney discussing eminent domain to DACA recipients who are fighting for the passage of a clean Dream Act—one without a deal to fund a border wall.
“This is an intersectional issue,” Salas says. “The more we get together and realize that everything is related—this is not just an environmental issue, it’s not just an immigration issue—the better chance we have to defeat all this stuff.”
The Rio Grande Valley comprises four counties in South Texas, where residents shift easily between English and Spanish, often settling into Spanglish. Many have family ties across the border, and travel back and forth for visits and holidays. Mexican shoppers cross on day trips to frequent local businesses and access U.S. stores and brands at the recently remodeled La Plaza Mall in McAllen, Texas.
The border wall threatens this liminal way of life. Salas, whose family has lived on both sides of this stretch of border for four generations, believes the racist rhetoric around the wall could hurt the Valley’s robust international commerce by deterring Mexican shoppers who feel insulted by Trump’s attacks on their country.
“Our brothers and sisters in Mexico are hearing” Trump’s racist rhetoric, Salas says, “and they have made it very clear that they’re not going to fund the wall and they’re not okay with this rhetoric.”
In addition to a physical divide, a border wall would place a psychological burden on residents with deep ties to both countries, and add to the already constant surveillance from Border Patrol.
“On a spiritual level, I think marginalized people down here have been consistently hit for generations,” Salas says. Even the struggle against the wall is a longstanding battle, she says, noting that local activists have been fighting its various incarnations, such as the Secure Fence Act of 2006, for more than a decade.
To justify building the wall, Trump has built an inaccurate caricature of immigrants as killers and criminals. Elizabeth Rodriguez Marquez, president of the Mexican-American civil rights organization RGV Carnalismo Brown Berets and a single mother of five, says the wall “won’t protect anyone,” and that the proposal contributes to xenophobia and racism.
“False constructs have been created to dehumanize and stereotype Mexican Americans, people of color,” Rodriguez Marquez says. “People that don’t live in this area don’t get to see that they’re false stereotypes—we’re a really hardworking, united community.”
At the rally, Valley culture is on full display, with smoked sausage tacos, elote, aguas frescas and the conjunto music that’s ubiquitous at outdoor gatherings here. Volunteers in black T-shirts that read “no border wall” and “no al muro” hand out information on their respective organizations. Children draw colorful pictures of birds and animals trapped behind a fence, and write postcards to Congress. Visitors also take advantage of the cool, cloudy day to enjoy the wildlife refuge, which is offering free admission in celebration of its 75th anniversary.
“They try to sell the border wall as something that’s just happening in this rural, isolated community, that it’s not going to affect anyone,” says Gabriel Sanchez, 30, an activist from nearby Mission, Texas. “The truth is, it’s going through historical landmarks, through people’s homes, through communities in which people have lived for hundreds of years.”

Yvonne S. Marquez was born and raised in the Rio Grande Valley. She’s a journalist based in Dallas, and a senior editor at Autostraddle, a forward-thinking online feminist publication for queer women.