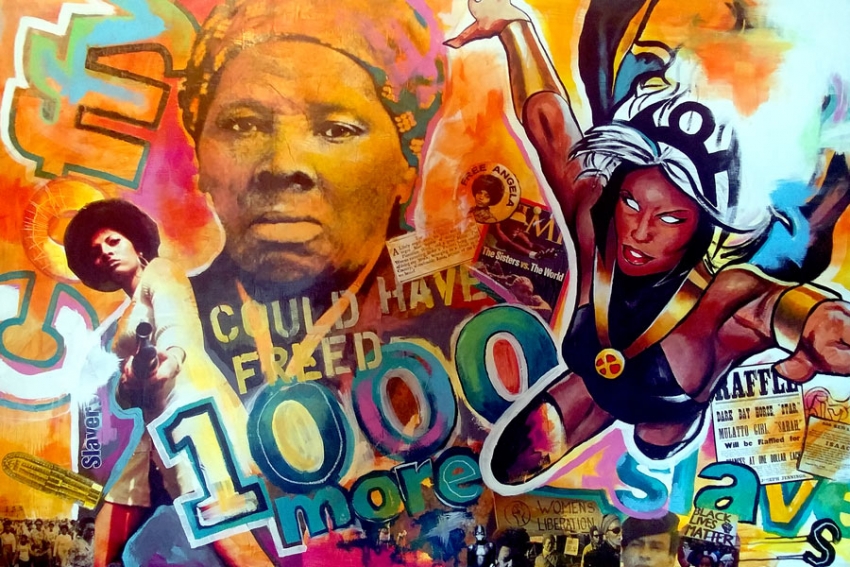 From Harriet Tubman to Black Panther

An artist speaks on heroism in the Black community.

My piece works well with the whole idea of the film and the subtext of African Americans, Africa and armed revolution.

Raymond A. Thomas has been working on the art soon to be featured in Hero•ism, an exhibit at Gallery Guichard on Chicago’s South Side, for almost two years. His timing couldn’t have been better, as the new film Black Panther has put Black heroism in the spotlight to a degree rarely seen. In These Times spoke to Thomas, former art director at Ebony and former interim art director at In These Times.

What does “hero” mean to you?

For me, a hero is someone devoted to truth, courage and conviction, and someone who has a profound love for the people. I tried to speak on heroicness as a sense of community, people who strive to better our situation.

How does gender play into your art?

I was raised by strong, powerful Black women and so the piece, “1000 More,” is a celebration of women. They were powerful liberators as well. Who was more powerful than Harriet Tubman, Storm, Pam Grier or Angela Davis?

What do you hope viewers take away from your art?

It’s about celebrating the triumphs and tears of the African-American experience while also exposing the symptoms and situations that have perpetuated and continue to perpetuate evil and misrepresentation. I’m always hoping that my art is something that people can use to revisualize themselves. It’s about creating something that’s against the onslaught of lies and that reaffirms the humanity of my people.

It’s like in Black Panther. A young child, or anyone, can be inspired by that.

My piece works well with the whole idea of the film and the subtext of African Americans, Africa and armed revolution. I applaud Marvel for giving the filmmaker the latitude for his craft—the intricacies of culture, all those nuances and having women in these powerful roles. I was amazed that I was watching a Disney film

Madiha Hussaini is a winter 2018 In These Times editorial intern.