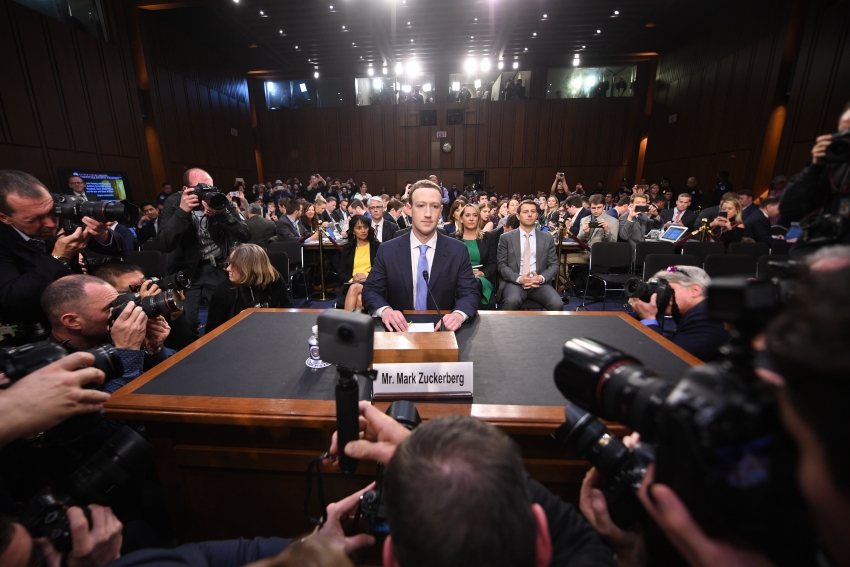 The Zuckerberg Hearings Were a Show Trial, And Facebook’s Monopoly Remains Unthreatened

Despite public outrage, Congress is not taking meaningful steps to break the power of Facebook.

Facebook is a vehicle of surveillance capitalism and, even under increased scrutiny, will find ways to circumvent the constraints that may be placed upon it to serve its own ends.

Last week, Facebook CEO Mark Zuckerberg testified before Congress to address concerns about his company’s collection of personal user data. The appearance attracted a maelstrom of media coverage, as it was the first time the notoriously press-averse Zuckerberg has appeared in front of Congress.

Yet, as members of the public are increasingly questioning the monopolistic power that Facebook has amassed, Congress seems content to preserve the self-regulatory orthodoxy of the technology industry. As a for-profit operation that does not charge cash for basic use, the company is fundamentally predicated on harvesting user data for advertising purposes. Once the storm has cleared, Facebook will, in all likelihood, return to business as usual.

At the hearings, members of Congress claimed to have concerns about Facebook’s approach to generating profits. Silicon Valley Congressperson Anna Eshoo (D-Calif.), for example, asked Zuckerberg if he is willing to change his business model “in the interest of protecting individual privacy.” In addition, a number of other Democratic senators raised questions about the company’s scope and methods of data mining. Free-market champion Lindsey Graham (R-S.C.), meanwhile, broached the subject of regulations for technology companies.

However, as journalist David Dayen cautioned in a report on the hearings, Congress appears unwilling to take forceful action. Senator Orrin Hatch (R-Utah) requested Zuckerberg’s assistance in drafting regulations. Senator Bill Nelson (D-Fla.) warned, “If Facebook cannot fix the privacy violations, we are going to have to.” This remark suggestings that technology companies should self-regulate by default, and positionings government as a reactive, laissez-faire force. Zuckerberg has also managed to ingratiate himself with some policymakers, earning compliments on his demeanor from the likes of Sen. Dianne Feinstein (D-Calif.) and Sheldon Whitehouse (D-R.I.).

Facebook, of course, likely has no intentions of changing its policies, and certainly won’t do so in any meaningful way if it’s expected to govern itself. The platform has already had numerous opportunities to change in response to public scandals. As ProPublica revealed in 2016, Facebook’s ad platforms have repeatedly allowed racial discrimination, violating the Fair Housing Act and Fair Employment Act. Now, the company seemingly encourages legal racially targeted ads through an advertising strategy with the deceptively benign name “lookalike.” Amid heightened anxieties over digital privacy, Facebook has been lobbying to adjust an Illinois piece of legislation to protect its ability to harvest biometric data without user notice or consent.

This anti-regulatory climate is rooted in decades of neoliberal policy, and also—most likely—in lawmakers’ personal stakes in Facebook’s success. Facebook has spent nearly $52 million on lobbying since 2009. Eshoo was the top recipient of Facebook contributions on the House commerce committee. What's more, Whitehouse owns stock in Facebook, along with Reps. Kurt Schrader (D-Ore.) and Joseph P. Kennedy III (D-Mass.). Nearly 30 lawmakers in total are estimated to have invested in the company.

Facebook’s stakeholders, meanwhile, seem to be under the impression that the company is not in peril: After plummeting in the wake of the Cambridge Analytica scare, Facebook’s stock began to recover at the beginning of the month and rose precipitously upon Zuckerberg’s testimony.

That so many conflicts of interest cloud the process of questioning Zuckerberg raises questions about any solutions he might offer. Though he’s been largely evasive and made no promises to Congress, Zuckerberg has claimed he’ll globally implement the European Union’s digital-privacy standards, which are far more stringent than those in the United States. Naturally, Zuckerberg has been miserly on details, and, under no legal pressure so far to enact such changes, has no conceivable incentive to do so.

What’s more, the bill—and the hearings—evoke last year’s wave of tension between Facebook and the federal government over Russian advertisements. As a result, Senators Mark Warner (D-Va.), Amy Klobuchar (D-Minn.) and John McCain (R-Ariz.) proposed the Honest Ads Act, which would require Facebook to maintain a public record of advertisers that had spent more than $500 during the previous year. Despite the flurry of handwringing over this issue, the legislation born of it asks virtually nothing of tech companies, save some small improvements to transparency that pose no challenge to its ad-targeting methods. Tellingly, Zuckerberg and other tech leaders now endorse the bill—an easy act of damage control that won't compromise their bottom lines.

Congress may take small steps towards curbing Facebook’s monopolistic control over user data and media consumption, starting with the CONSENT Act, which would require Facebook to obtain consent from users before using, sharing or selling any personal information—among other mandates. If Facebook’s abusive practices are to be put to an end, however, incremental tweaks won’t suffice. Facebook is a vehicle of surveillance capitalism and, even under increased scrutiny, will find ways to circumvent the constraints that may be placed upon it to serve its own ends.

If Facebook is to become a more ethical operation, aggressive action in the public interest must be taken, from prohibiting targeted advertising to—more sweepingly—redefining media like Facebook as a public good. For far too long, lawmakers have shirked these responsibilities, allowing Facebook to proceed with autonomy and impunity. At this point, we can’t afford to let them continue.